McSally's Latest Performance: A Bogus Push for an Extra Week of Employment Bucks for Out-of-Work Arizonans 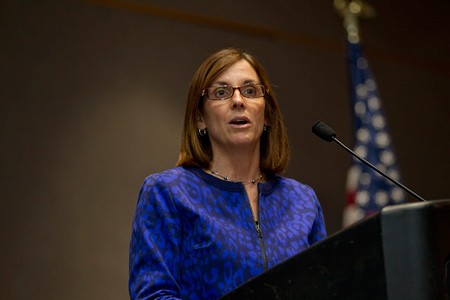 Sen. Martha McSally took to the Senate floor today in an effort to squeeze back into her “pragmatic problem solver” persona, but it’s an ill fit.

McSally delivered a sequel to her speech last week urging her colleagues to extend the extra $600 in unemployment benefits that out-of-work Americans have been receiving during the pandemic.

“I deployed to Washington to be a pragmatic problem solver,” McSally said Thursday, July 30. “And for the past five and a half years, I’ve made it my mission in Congress to better the lives of hardworking Arizonans. In a time of toxic partisanship, this is no easy feat.”

McSally is no stranger to toxic partisanship herself. Ever since she gave up defending a moderate Southern Arizona congressional district to seek a U.S. Senate seat, she’s fully embraced President Donald Trump and his takeover of the GOP. If you read her fundraising emails, you’ll see lots of references to radical left-wing mobs who are bent on eliminating all law enforcement, destroying our borders and stealing our precious bodily fluids. (OK, we made up the last part.) When Trump’s scheme to extort Ukraine came to light, McSally criticized those who revealed Trump’s corrupt extortion effort rather than the crooked effort itself—and, of course, she voted to acquit Trump on the charges. And let’s not forget her dismissal of CNN reporter as a “liberal hack” because he asked her if she would consider new evidence in that impeachment trial. None of that is pragmatic problem solving.

And none of appears to be helping McSally on the campaign trail as she faces Democrat Mark Kelly, the former NASA astronaut who has staked out a major lead over McSally. (Several polls in recent weeks, including surveys from Marist College and Morning Consult, show McSally down by double digits to Kelly; the Real Clear Politics polling average has Kelly ahead by 6.8 percentage points.)


With her speeches, McSally wanted to make Democrats look bad for refusing to support a one-week extension of the extra unemployment benefits—and give herself another hook for her fundraising emails.

Democrats argued that states aren’t equipped to reprogram their systems to allow a single week of extra benefits. But beyond that, McSally and her colleagues have had months to figure out what should be in a new coronavirus relief package—and they’ve fiddled that time away. What would an extra week accomplish besides giving Republicans more time to waste? As of today, the Senate was no closer to a package than it was last Friday.

“I understand as we work to defeat this virus—which we will—and support the economic recovery of our country, we need to incentivize people to return to work safely when they are able,” McSally said in her Thursday speech. “There are disagreements in this chamber on what that looks like, what the ultimate dollar figure or percentage will be, where we land and for how long, but what I know today is that Congress needs to do their job and prevent this desperately-needed extra lifeline from fully expiring.”

McSally didn’t mention that she voted to limit people from receiving that full $600-a-week lifeline when it was first proposed. (Yes, while she now talks about how important that extra money is for out-of-work Arizonans, she was against it before she was for it.) Beyond that, McSally has for months sidestepped opportunities to say what she supports in a relief bill, despite her efforts to brand herself as a straight talker. Last week, she co-sponsored a bill that cut the extra $600 weekly payment down to $200 a week. She has said that aiding state and local governments that are pinched by COVID’s economic catastrophe is just a bailout of corrupt Democratic cities such as Chicago. And her big proposal to help with the coronavirus outbreak was to offer American families tens of thousands of dollars for future vacations through a federally funded tax rebate. While the tourism industry has certainly taken a pounding, this is no time to be traveling, unless you want to spread the virus further. And let’s face it: You need to be able to spend money on a vacation before you can get reimbursed for it, so this was definitely aimed at higher-income Americans who have the disposable income sitting around to pay for plane tickets and hotel rooms.

Bottom line: While McSally is cool with paying for vacations for wealthy Americans, she’s dismissive about helping those at the bottom.

McSally might want to accuse Democrats of failing to do their jobs to help Americans in this crisis, but she’s largely been absent from the conversation herself. Her history as an appointed senator suggests these latest speeches were just a political stunt to get a headline from the liberal hacks in the media.