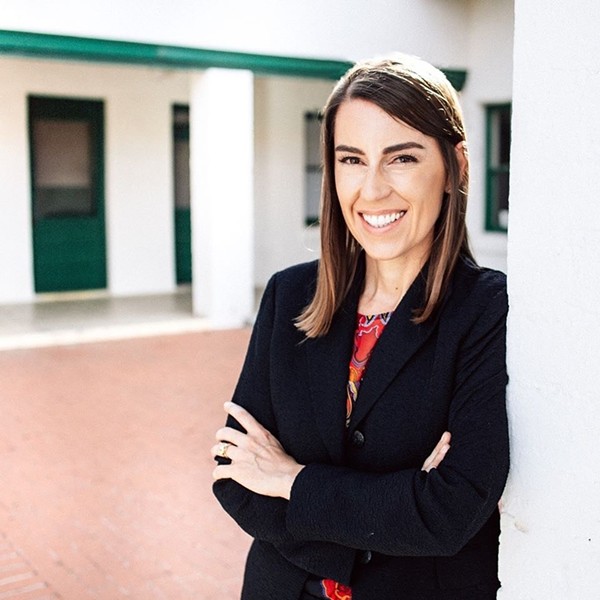 A candidate for Pima County Attorney returned a campaign contribution from a Tucson man awaiting trial for manslaughter after the Tucson Weekly discovered the donation on the candidate’s recently submitted 2020 pre-primary campaign finance report.

Laura Conover refunded a $250 donation made to her campaign by Ronald Corbin Jr., who is accused of shooting his girlfriend in the head in front of their 3-year-old child in 2012. Charges were filed six years later after a grand jury found cause to indict Corbin in 2018.

“I receive dozens of contributions a day from complete strangers here in our community, including modest contributions from laborers, and thank goodness, because grassroots contributions keep me in the race while the heart of the Republican party pumps so much money into my opponent's coffers. ” Conover wrote in an emailed response upon learning about Corbin’s contribution.

In next week's Democratic primary, Conover, a defense attorney who has never worked as a prosecutor, is facing two prosecutors from the Pima County Attorney's Office: Jonathan Mosher and Mark Deibolt. Mosher, who was a registered Republican until 2014, has received a number of contributions from Republicans, including auto dealer Jim Click, who has encouraged people to support Mosher. No Republican is in the race so the primary will likely determine who will take over the office that current Pima County Attorney Barbara LaWall has held since she was first elected in 1996. LaWall has endorsed Mosher.

Within an hour after being contacted by Tucson Weekly yesterday, Conover verified the contribution did in fact come from Corbin along with two donations from one of Corbin’s relatives totaling $250. She refunded the money yesterday.

"After being informed as to who Mr. Corbin is, I sent word to Ms. Ayup's family with my heartfelt sentiments and word that I had returned the contribution,” Conover wrote in a second email after refunding the campaign donations.

In June 2012, Corbin shot his girlfriend in front of the couple’s child after he had been drinking at Maloney’s on 4th. Corbin maintains the shooting was an accident and happened while trying to change the grip of his pistol.

Originally, the Tucson Police Department arrested Corbin on one count of manslaughter for the death of 27-year-old Genna Ayup. However, the accused was later released after prosecutors from Barbara LaWall’s office decided not to file charges citing lack of evidence.

“We hired a P.I. and he comes back and said he thought it was Murder One,” Kozachik said. “All we can do at this point is to actually have the trail.”

Kozachik not only takes issue with the Corbin family’s contribution, but also several donations coming from the defendant’s attorneys Laura Udall and Lance Wood because he believes it could delay the trial again should Conover win the Aug. 4 primary.

“This is nothing but a contrived effort by Corbin and his defense team to get this case in front of a new county attorney who would have to say 'My office can’t prosecute because these people donated to my campaign,'” Kozachik said. “If she wins, she’ll have to ask for a change of venue or start all over again and Genna’s family gets screwed.”

In an emailed response, Corbin’s attorney, Lance Wood, said he believes his client was exercising his rights as a free citizen.

Corbin’s trial is set to take place in March 2021.