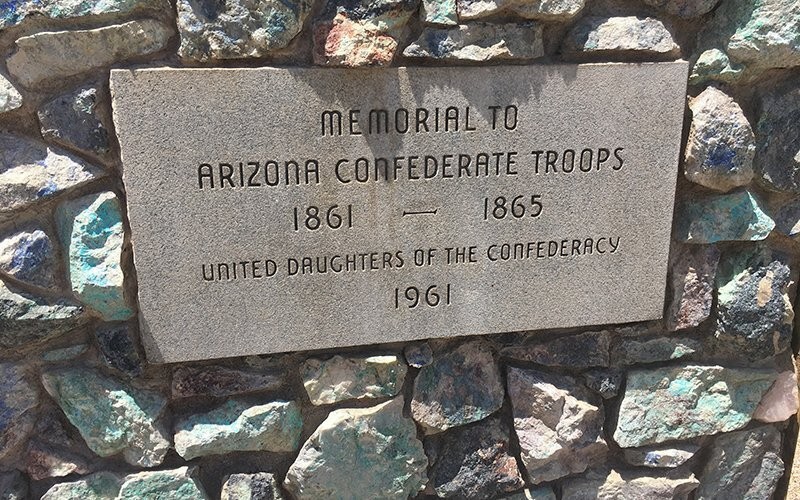 PHOENIX – As activists nationwide vandalize, topple and demand the removal of Confederate statues and memorials, the United Daughters of the Confederacy on Wednesday removed two monuments from the Capitol complex and along U.S. 60 near Gold Canyon.

After advocacy groups and local leaders sent letters to Gov. Doug Ducey urging the removal of at least six monuments throughout the state, the United Daughters of the Confederacy on June 30 sent its own letter to Arizona Department of Administration Director Andy Tobin requesting the state “regift” the monuments for repairs.

Overnight, two memorials – the Memorial to the Arizona Confederate Troops in Wesley Bolin Plaza and the Jefferson Davis Memorial Highway marker near Gold Canyon – were removed from state property and “returned to the United Daughters of the Confederacy, the private organization that originally placed the monuments on state property,” according to a news release Thursday from the Arizona Department of Administration.

Activists recently defaced and vandalized these monuments, according to the letter from the United Daughters of the Confederacy, a hereditary society founded in 1894 to honor rebel war dead. It said the monuments are “now in need of repair, but due to the current political climate, we believe it unwise to repair them where they are located.”

The removals did not cost the state anything, according to United Daughters of the Confederacy letter signers Sandra Oxedine, Nadine Arney and Silas Griffin. They did not immediately respond to Cronkite News’ requests for comment, and it’s unclear where the monuments may end up.

Although he has not responded directly to letter writers demanding removal of Confederate memorials, Ducey told a news conference June 11 that he has “not been a fan of removing monuments or memorials, and certainly not because a letter was written. I also think there should be a clear public process for people that would like to pursue that.”

Monuments to the Confederacy have been targeted across the country after the May 25 death of George Floyd at the hands of Minneapolis police and the subsequent Black Lives Matter protests. The debate to remove them has extended to include controversial figures from coast to coast, from the toppling of statues of Father Junipero Serra in California to the beheading of the Christopher Columbus statue in Boston by Native American activists.

On June 17, the Southern Poverty Law Center estimated more than 1,700 Confederate symbols stand in public spaces across the country, according to the advocacy group’s president and CEO, Margaret Huang.

Secretary of State Mike Pompeo said July 16 that the historical figures that activists tore down monuments of “fought for unalienable rights – from our founding to the present day,” according to the Washington Post. During a Fourth of July event at Mount Rushmore, President Donald Trump voiced opposition to demolishing Confederate and other monuments, calling the nationwide movement “a merciless campaign to wipe out our history, defame our heroes, erase our values, and indoctrinate our children.”

Activists in Arizona have called upon the removal of these monuments for years. The East Valley NAACP began these efforts in 2015 with a letter to Ducey and sent another letter in February, chapter president Roy Tatum told Cronkite News.

“We believe that Governor Ducey should have acted and taken on the leadership role a long time ago,” he said. “It’s long overdue.”

More than 200 Arizona veterans early this month joined the efforts by signing a July 1 letter to Ducey demanding the removal of the six Confederate monuments.

“This is not a win for us, this is a win for all those people who fought against slavery and stood out for the better part of a decade in front of those monuments protesting,” organizer Corey Harris, an Army veteran, said Thursday.

The state should not glorify Confederate soldiers who fought to dissolve the Union, Harris said before the two monuments were removed.

“It stands against everything we’re taught in basic training through our last day getting out of the service,” he said.

State Rep. Reginald Bolding, D- Phoenix, asked Ducey to remove the monuments in 2015, in the wake of the racially motivated massacre that spring at a historic Black church in Charleston, South Carolina, and again in 2017, according to a news release Thursday.

“It’s good that finally the monument in Wesley Bolin Plaza is gone, but the governor has had the ability to remove these symbols of hate and racial oppression from the public square the entire time,” wrote Bolding, who is chairman of Arizona’s African American Legislative Caucus.

Today, 200+ AZ veterans are making their voices heard. We’re sending a letter to Gov. @dougducey office demanding that he remove the Confederate monuments in our state.

These statues and plaques memorialize those who chose war over public discourse, for the purpose of... (1/4) pic.twitter.com/m6Go0E3qV7

“Our letter called on him to remove all of the Confederate monuments,” Marquez said Thursday. “I think it is a small symbolic victory that these are removed, but it does not demonstrate strong leadership from the governor.”

Hobbs stressed the need to look forward and acknowledge efforts from the community.

“Black leaders, veterans groups and Arizonans from all over have been taking action to remove these monuments for years,” she told Cronkite News in a statement Thursday. “They should be credited and applauded for this recent achievement.”

Pompeo says it's a "disturbed reading of history" and "slander on our great people" to suggest America was founded for human bondage.
He says the monuments protesters are pulling down honor people who "fought for unalienable rights – from our Founding to the present day."

Arizona, which did not become a state until 47 years after the Civil War ended, was part of New Mexico territory when the war broke out in 1861. It was organized as a separate territory in February 1863.

During the war, Tucson was considered sympathetic to the South and Confederate leaders hoped to establish access to the Pacific Ocean through the southern half of the territory. No Confederate soldiers were killed in battle in Arizona, despite the memorials across the state, according to the Arizona Department of Emergency and Military Affairs.

Veterans understand symbols differently, according to Harris, who said the symbols of liberty and freedom means more once “you’ve had to fight for it.”

“I would call those monuments propaganda,” Marquez said. “We should learn from the Civil War and the traitors that betrayed our country. There was an unjust cause and that cause was slavery.”