Danehy: Be Wary of the Numbers But Watch the Trends. And Wear a Damn Mask! 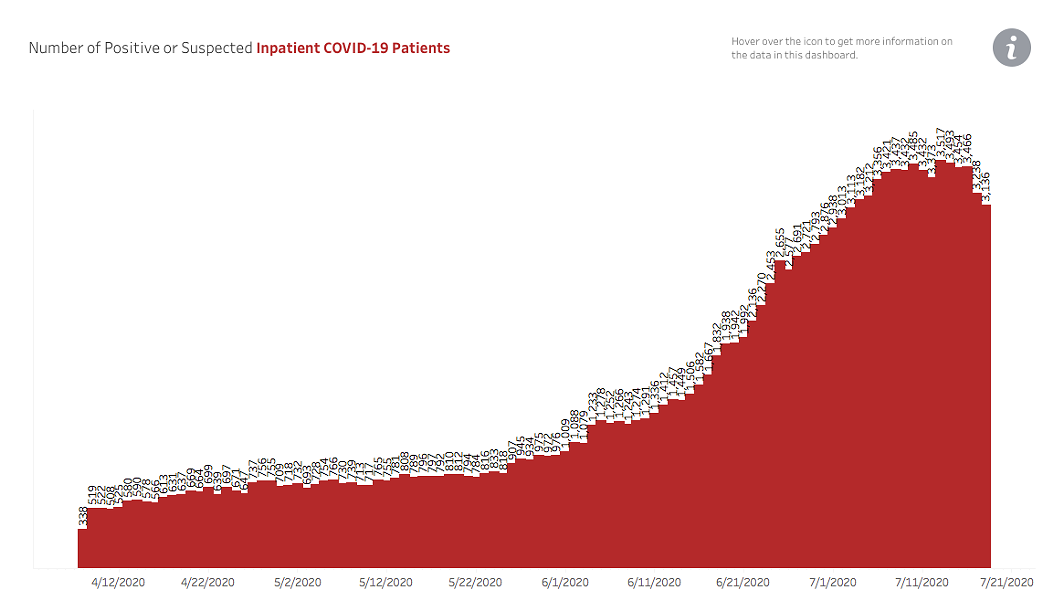 The Big Bang Theory had a recurring character, a likeable dimwit named Zach who was best-known for saying things like, “That’s one of the great things about science—there’s no one right answer.” That’s cute (and utterly false), but in the Time of the Pandemic, in these life-or-death days, being dimwitted (especially intentionally so) is not likeable or useful or acceptable. It’s criminal.

Not everybody is good at math and science. That’s just a fact of life. However, I’ve never understood why it’s socially acceptable to brag about one’s deficiency in that area. (“Oh, I’m horrible at math…giggle”). It’s like standing up at a formal dinner party and announcing that you have really bad incontinence. It happens, but keep it to yourself (in both word and deed).

It was obvious from the start of this mess that the media would often take the lazy route and just throw a bunch of numbers at the watchers/listeners/ readers. That way, there is something for everybody and essentially nothing for anybody. You give people a smorgasbord of figures and they can pick and choose what they want to bolster their argument or (as is more often the case) to give themselves an excuse to ignore the reality that’s right in front of their faces.

I could spout real (and important) raw numbers, but then I would be engaging in the same folly I just criticized. More enlightening are trends.

The main problems with numbers are twofold. First, unless you’re like John Nash (of “A Beautiful Mind”) or Srinivasa Ramanujan (who had an even more-beautiful mind), a series of numbers thrown at even a well-educated person will eventually begin to cascade and dissolve into mathematical gibberish. (So imagine what it must do to the average Trump voter.)

It’s okay if the figures are online or in a newspaper or magazine because the reader has time to pore over the numbers and try to make sense of them. But when they are presented on the radio or (especially) television, it does a disservice to the person who is trying to get pertinent information. Again, trends are more informative than raw numbers. If the TV talking head comes on and says that Arizona had 314 confirmed cases of COVID-19 on May 1 and then, just two months later, that number was 4,877, people would say “Wow, that’s a bigger number.” But if the TV guy said (on July 1), “Today, Arizona is reporting 16 times as many cases of the virus as we did just two months ago,” that actually conveys information that, which less specific, is actually more significant.

Of course, the other main problem is that numbers can be misused. And it’s not just the Benjamin Disraeli (and Mark Twain) quote about, “There are lies, damned lies, and statistics.” People have long cherry-picked stats to bolster their argument, but in the Trump era, the lazy bastards don’t even bother. They just make stuff up and their audiences lap it up. (I read a disturbing thing about Trump followers who refuse to believe their own eyes. Three-and-a-half years after the fact, they had a bunch of them look at the aerial shots of the Obama and Trump Inaugurations and they still swear that they see more people in the Trump picture, apparently seeing tightly packed-together white people who showed up for the thing disguised as empty sidewalk.)

The other day, I was listening to the local morning Trump licker and he was trying to claim that things have not gotten worse in Arizona since Ducey re-opened the state. (The radio talker was an early cheerleader for opening things up and God forbid that he admit that he was wrong.) So, he's going on this rant and he finishes by claiming that “things have gone down 17 days in a row in Arizona.”


That leaves the guy stuck in crappy traffic on his way to his crappy job trying to figure out the reason for his crappy life to come to the only possible conclusion—the Government is lying to him. Crappily.

There is a figure known as the Effective Reproduction Rate Rt (R-sub-t). If it is above 1.0, the virus is likely to spread quickly. If it’s under 1.0, that will slow the spread. Arizona was well above 1.0 when the shelter-in-place order went out. Within a couple of weeks, it dipped below 1.0 and stayed there for the entire month of April (getting as low as 0.89 for the week of April 18-24). As soon as Doug Ducey opened up the state, it skyrocketed back over 1.0 and stayed there from the beginning of May until the end of June. The second shutdown brought it back down under 1.0 (it’s 0.97).

I highly recommend exploring the website rt.live. You can see the charts and the curves that illustrate how Ducey has failed us, how local leaders have nudged things in the right direction, and (most importantly) how the vast majority of Arizonans are taking this (and each other’s health) seriously and bending this monster to our will.

Not everybody is on board. There are radio talk-show ass-clowns who, like their Lord and Master, are incapable of admitting that they were wrong about the virus. And there is Pima County Supervisor Ally Miller, who somehow believes that wearing a mask can cause cancer from your own bad breath blowing back into your lungs. (She is on her way out; her mind left quite a while ago.)

Amazingly, in the time it took me to write this (I type slowly, but not that slowly), Arizona’s Rt number went from an okay-but-not-where-civilized-people-should-be 0.97 to a you-gotta’-be-freakin’-kidding-me 1.01, meaning that we’re back on the wrong side of the line.

Especially frustrating is the overall Rt chart for the 50 United States, plus Washington, DC. Three months ago, only four of the 51 were in the red (at or above 1.0), which meant that the vast majority of states (and people) were doing the right things and just needed to hang on a little longer. But then itchy Republican governors started opening things up and we see that 25 of the 51 are suddenly above the 1.0 line, including one as high as 1.33.

Move to one month ago, and suddenly only five states and DC are below 1.0. Today it’s seven states. That’s just pathetic.

Sitting through online Mass today, I realized that the gospel about the man who sowed good wheat seed only to have an enemy come along and sow weeds in with the good seed had a modern relevance. The internet can be a valuable source of good information, but it is also a cesspool of ignorance. For every balanced journalistic story about Dr. Fauci, there’s a website that claims that his wife is the sister of Ghislane Maxwell. (Sadly, I’m not making that up.) For every informative Covid-19 website, there are four or five that use racist language to describe a virus that’s definitely a hoax but has killed the same number of people as the flu, except those people aren’t really dead because an out-of-work game-show host knows that the names were made up by the Deep State to hurt Trump’s re-election chances.

Websites like rt.live help us to understand that which we already know in our hearts and minds. It doesn’t take a math genius to know that infections are going to spike a couple weeks after Arizona goes from sheltering in place to opening up bars and gyms. What it does take is someone who is willing to see and acknowledge the truth. The saying that “there are none so blind as those who will not see” has never been more true. The Governor of Oklahoma tested positive for COVID-19 a couple weeks after attending the disastrous Trump rally in Tulsa (without a mask) but swears that there is no way he got the virus there.

I take great solace in knowing that almost everybody these days is wearing a mask. None of us enjoys it, but we’re doing it for each other.

The outcasts (a dwindling cabal, thankfully) are the type of people who are quick to say that they know their rights, but they never say anything about personal responsibility or shared sacrifice. Long after this is over, they will continue to believe that they were some kind of super-patriot, having stood up to science and math and human decency in the name of some perverse concept of liberty.

I hope that the stores hire gigantic security people to tell the mask-less morons to take their sorry asses on down the road so that the overworked and underappreciated store workers won’t have to. I’d be willing to add a surcharge to help pay for the guards. Wouldn’t you?