On the Next July 4, Let's Make Sure We Still Have the Country our Founders Entrusted to Us 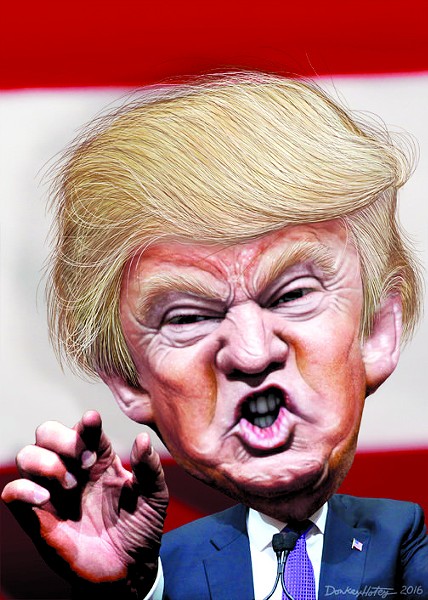 That Mount Rushmore display last night—an alternately smirking and glowering Mussolini declaiming to howling hyenas—shook me to my toenails. Each time they chanted “USA! USA!” he paused with that look of self-adulation I’ve seen from Mobutu to Ceausescu to Qaddafi. They roared when he said anyone defacing a block of stone can be sentenced to a minimum of 10 years in prison. They booed when he labeled long-overdue protests enshrined in the Constitution as extremist leftwing terrorist acts, all the work of “liberal Democrats.” Unlike all those other despots I’ve covered, this man is deeply disturbed in a different way. And others were propped up by corrupt, coopted armies. We have no excuse. We put him there ourselves.

How many qualified voters, too sanctimonious to choose “the lesser of two evils,” voted for a no-chance also-run or sulked at home because Bernie Sanders wasn’t on the ballot? How many just stayed home, with something better to do than save America from what was blindingly obvious before November?

I’ve watched democratic states slip into shitholes since the 1960s. From time to time, I’ve covered Trump’s sociopathic, racist narcissism as he threw poor families out of their homes to build yet another Trump-Dump palace bound for bankruptcy. Before November 2016. I wrote about a coup d’etat attempt. In hindsight, I fell far short, never imagining that craven senators, greed-blinded tycoons and mindless morons would take us to this point. And now we learn that his fan-boy obsession with Putin now amounts to outright treason, shrugging off $100,000 bounties on the heads of U.S. troops he extols in speeches.

That speech, crafted by his Rasputin handlers, had none of the usual rambling and boastful asides. It railed against those “communists” in our streets, yet it was straight-up Stalin. He refused to meet first with Indian tribal leaders, whose spiritual grounds he desecrated. He insisted on lavish fireworks against the pleas of foresters who feared wildfire after years of a beetle infestation. His cults packed in tight, unmasked, simply to feed his insatiable ego.


To all of this, add Trump’s assertion—repeated again this week—that the Covid-19 he has thwarted better than any other leader will magically disappear. I write this from Arizona, now a champion super spreader with a governor who still refuses to follow medical guidance.
Joe Biden leads the polls, but we have four months to go. Trump can win four more years to stamp out democracy if – only if – Democrats and independents let him succeed with his desperate Hail Mary: fear and loathing. We need to win over conservatives in a handful of states who are irrationally frightened by “socialism” and ethnic mayhem in the streets.

The nation exploded in long overdue rage at the execution of George Floyd. Peaceful marches made the point. In Congress and at all other levels, authorities are beginning to rein in police. This is urgent, but it is immensely complex. And we’re dealing with human nature. Looters and provocateurs invariably glom onto to legitimate street protests. The issue of police brutality soon mushroomed into the larger issues of slavery and injustice of Native-Americans.

These larger questions can be addressed by laws after a national discussion. We need to legislate against discrimination at every level. But violence in the streets and reducing social complexity to black and white only deepens individual bigotry. Trump’s Orwellian doublespeak said all people are created equal. He doesn’t believe that for a minute, nor do his cultists. But it is what our Constitution guarantees.

My view, for what it’s worth, is this:

1. We urgently need to channel public outrage into reforming police. Defunding is an unfortunate word. Yes, get rid of tanks and heavy artillery. Use skilled social adjuncts for non-criminal situations. We need well-trained, carefully screened police, along with citizens’ oversight to swiftly and fairly prosecute abuse. Police unions have far too much power. Blacks suffer by far the most, but so do all others. This can’t wait.

2. Slavery poisoned our past, and we need to heal its scars. But we need to understand it. Wearing Kente cloth is not enough. That comes from Ashanti-Akan chiefs who sold captives wholesale to white traffickers. When rival tribes defeated them, their people went to the coast in chains. We can talk this out in December to decide what to do about statues and monuments that evoke our checkered, unjust past. Attacking “white people” across the board is no answer. Ulysses S. Grant married a woman whose family had slaves. His abolitionist parents shunned the wedding. He won the Civil War and, as president, made sure freedmen had the vote. At least one black possible vice president has a slave-owning ancestor. None of this is an excuse for anything. But it’s complicated.

Trump spoke again about insidious enemies seeking to tear down beloved relics of our glorious past, the greatest nation in history. "They will never, ever succeed." This is Hitler describing his 1,000-year Reich.

Happy Independence Day, everyone. Let’s celebrate in our safe little clusters and then get to work—united and focused—on the one thing that matters most: making sure that on the next July 4 we still have the country our founders entrusted to us.

Mort Rosenblum is founding editor of the quarterly, Dispatches. From 1967 to 2004, Rosenblum was Associated Press bureau chief and special correspondent in Africa, Southeast Asia, Argentina and France, reporting from 200 countries. From 1979-1981, he was editor of the International Herald Tribune. The latest of his 12 books is "Escaping Plato's Cave: How America's Blindness to the Rest of the World Threatens Our Survival." Others include "Who Stole the News?," "Coups and Earthquakes," "Chocolate: A Bittersweet Saga of Dark and Light" and the best-selling "Olives: The Life and Lore of a Noble Fruit." Read more at The Mort Report.