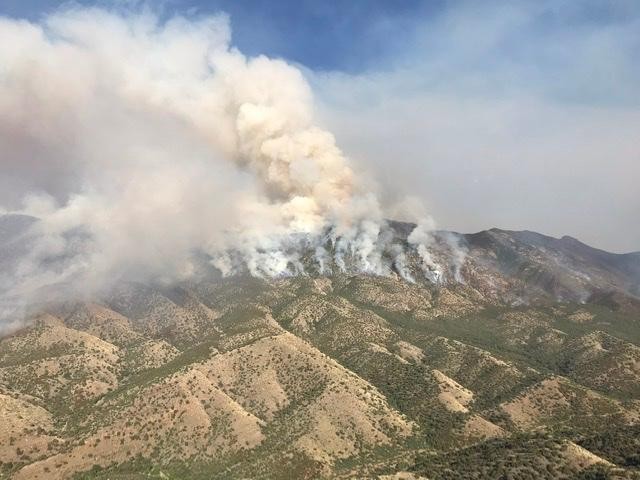 The 75,000-acre Bighorn Fire is now burning on several fronts throughout the Catalina Mountains after being fanned by gusty weather and has even stretched across the Pinal County line to the north. The June weather is reaching near 110 degrees during the day, and causing poor humidity recovery at night, resulting in “critical fire conditions,” according to the national Incident Information System. The fire is currently 33 percent contained, with 876 fire personnel on the job.

The fire is burning across the northern, southern, and eastern flanks of the Catalinas, which is expected to lead to smoky conditions today. This smoke is anticipated to worsen due to higher winds over the coming days.


During a morning meeting, Tim Reid, deputy incident commander on the Bighorn Fire, assessed the multiple areas of burning: Reid says the southern fire in Sabino Canyon and Catalina Foothills areas is fairly secure and that fire teams are "fairly optimistic, but there's still a threat." The burning across Pusch Ridge near Oro Valley is also in good shape, as the fire is entering sparser fuels as it comes off the mountain flanks.


Reid said fire crews are focusing on the fire burning north near Oracle, using bulldozers and burn lines to keep the Oracle Ridge area in check and braced for additional winds.


They are also taking steps to protect Mount Lemmon's Sumerhaven.

"The area where we're really focusing on is the Summerhaven area,” Reid said. “The basic strategy and tactics are lining and firing underneath the values at risk, and connecting them to the Mount Lemmon highway, and then bringing fire down the highway so that the values at risk are protected from a southwest push."


According to the National Forest Service, Catalina and Oro Valley have the greatest risk of smoke, especially in the morning.


"We're feeling pretty good about where we're at,” Reid said. “If we have a successful day today, the stage will be set for success with the wind test that's coming up."


Fire crews remind the public that drones are prohibited over the fire area, as firefighting aircraft are busy and must be grounded in drones' presence. According to NFS, on June 8, a drone was observed over the Bighorn Fire’s southern perimeter, which "forced the aircraft suppression effort to be halted, endangering the lives of on the ground firefighters and the aircrews at a critical time during the height of the burning period."

This was the second such incident in three days.