The number of confirmed coronavirus cases in Arizona closed in 33,000 as of Friday, June 12, with a jump of 1,654 new cases reported this morning, according to the Arizona Department of Health Services.

A total of 1,144 people have died after contracting the virus, but the number in Pima County couldn't be determined as the Arizona Department of Health Services data dashboard was experiencing technical difficulties this morning and would not load several statistics being followed by the media and public.

In Maricopa County, the number of confirmed COVID-19 cases hit 17,010.

Because symptoms can take as long as two weeks to appear after exposure to the virus (while some people can remain entirely asymptomatic), health officials continue to urge the public to avoid unnecessary trips and gatherings of more than 10 people, especially if you have underlying health conditions, and have advised people to cover their faces with masks in public.

Although Gov. Doug Ducey told Arizonans that the state "was clearly on the other side of this pandemic" when he lifted his stay-at-home order on in mid-May, Arizona hospitals continue to see a rise in the number of people hospitalized with COVID symptoms, as well as more people visiting emergency rooms. This morning's Arizona Department of Health Services report shows that as of yesterday, a record 1,336 Arizonans were hospitalized, a jump of 327 from June 1. A record number of 915 people arrived at emergency rooms with COVID-like symptoms on June 10, according to the report. Previous to June, the number of people seeking help in emergency rooms never topped 667, but the daily number hasn't dipped below 800 since June 5. Because of the ADHS website's technical difficulties, the number of people in ICU units today was not available this morning. 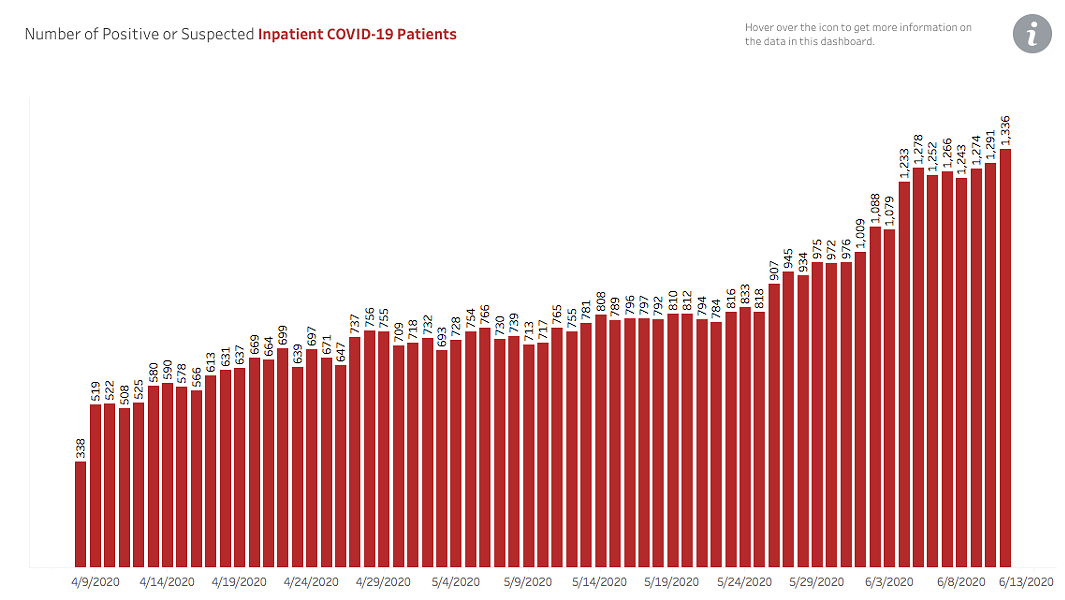 In a contentious press conference yesterday, Ducey acknowledged that trend was moving in the wrong direction and promised the state would continue to monitor that number. But he said the idea of enacting a new stay-at-home order was not under discussion by his administration.

Ducey pushed back at local and national media reports that suggested that the rising cases, increased hospitalization and reversal of CDC gating criteria trends meant that Arizona was moving in the wrong direction. He called reports that the healthcare system was nearing capacity as "misinformation."

He said Arizonans would have to learn to live with the virus.

"This virus is not going away," Ducey said. "There is not a cure for this virus. There is not a vaccine for this virus. So this virus is something we need to learn to live with. And we need to make sure we are protecting the most vulnerable in our society. Those are folks in a certain age bracket with underlying health conditions and at-risk conditions and we're going to continue to do that every single day until there is a vaccine."

Ducey pointed to a letter from the Health System Alliance of Arizona released yesterday that stated: "As representatives of the largest health systems representing 80% of care provided in this state, we would like to assure the public that we have available bed capacity and surge plans are in place to continue to serve the people of Arizona. We are well prepared to manage an increase in patient volume."

"In addition, the utilization of the surge line remains an effective tool in ensuring that patients are evenly distributed among hospitals in order to avoid capacity issues at any one facility," the letter added. "Our surge plans will also create additional capacity for patients if needed. Arizona’s network of medical care is strong, stable and prepared."

Ducey sidestepped numerous questions about whether his administration had requested the letter, saying that he had not personally requested and then saying that the letter got accurate facts to the public.

Banner Health officials warned last week that unless current trends changed, they would have to activate a reserve bed plan as their ICU beds were nearly full.

Ducey, who has rarely been seen with a mask or face covering and whose administration has neglected to include the advice in various health advisories it has sent out, said he did wear them while shopping when he cannot physically distance from others by at least 6 feet. He advised Arizonans to wear them if they felt comfortable doing so.

He insisted that he did not lift his stay-at-home too early.

• The University of Arizona this week announced expanded testing eligibility for COVID-19 antibodies, which indicate whether you have had COVID-19 and may be at least temporarily immune to the virus. Hospital employees, healthcare professionals licensed by the boards of naturopathy, homeopathy, podiatry, chiropractic examiners, optometry and nine other health care categories are all eligible, as well as corrections officers and child safety workers employed by the state. The university also announced a new testing site in Nogales, Arizona. According to UA, the roughly 6,000 blood samples analyzed during the first phase of testing in Pima County resulted in no false positives. Registration for the test is available at this website, where participants also can find a list of all the groups eligible for testing.

• Fire crews continue to battle the Bighorn Fire in the Santa Catalina Mountains. Lightning storms caused the fire, which is growing worse thanks to gusty weather and high temperatures.

The Bighorn Fire ignited on the evening of June 5, burning across the Pusch Ridge. The fire, clearly visible from the Tucson valley, had burned 6,200 acres and was 10 percent contained, according to a morning update today. The Pima County Sheriff's Department yesterday ordered the evacuation of neighborhoods north of Ina Road between First Avenue and Alvernon Way as firefighters prepared a burnout operation to protect homes. Sheriff's deputies went door-to-door in the area to alert residents who may not have heard the order. A cooling shelter is available at CDO High School, 25 W. Calle Concordia, in Oro Valley.

The Sheriff's Department also warned residents living north of Skyline Road between Alvernon Way and Sabino Canyon Road to prepare to evacuate; The Oro Valley Police Department posted a notification for residents on the western slope of the Catalina Mountains, near Pusch Ridge, to be ready to leave at a moment’s notice. Catalina State Park has been closed and firefighters have established a restricted area bounded along the Coronado National Forest boundary south and east to the northeast corner of the Sabino Canyon Recreation Area, northeast along the Forest boundary to its northeastern terminus at Sabino Creek, Sabino Creek north to the Arizona Trail, the Arizona Trail northwest to the junction with Romer Trail, and the Romero Trail northwest to Catalina State Park

The Tortolita Fire, which also started on June 5 and spread to an estimated 3,140 acres, was 100 percent contained as of Thursday night. The Tortolita Fire was two miles from the Cochise Spring area, west of Tortolita and Christopher Ranch, east of Marana.

Fire crews remind the public that drones are prohibited over the fire area, as firefighting aircraft are busy and must be grounded in drones' presence. On June 5 a drone incursion resulted in "an investigation with the drone operator being issued a violation notice."
Prev
Next