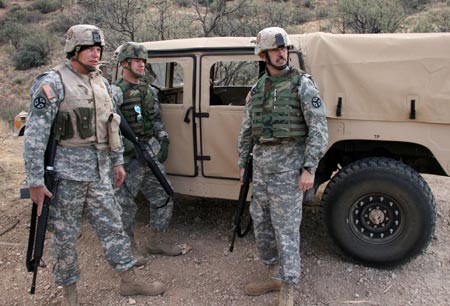 PHOENIX – President Donald Trump’s pledge to deploy “thousands and thousands of heavily armed soldiers” to put down protests was seen as either a promise or a threat, depending on which Arizona lawmaker was reacting to his comments.

Trump’s comments came in a Rose Garden speech Monday afternoon, as the nation entered its second week of clashes between police and demonstrators across the nation protesting over the death of George Floyd at the hands of Minneapolis police on May 25.

The protesters have been met with a strong police presence in most cities, National Guard troops in some and, when they turned violent, curfews in many cities – and the entire state of Arizona. But Trump said that’s not enough.

“Mayors and governors must establish an overwhelming law enforcement presence until the violence has been quelled,” Trump said Monday. “If a city or a state refuses to take the actions that are necessary to defend the life and property of their residents, then I will deploy the United States military and quickly solve the problem for them.”

Critics have questioned whether Trump has the authority to invoke the Insurrection Act to send federal troops into U.S. cities without the approval of state and local officials. More importantly, they question whether it’s the right thing to do.

“While we must protect small businesses and the safety of all citizens, the president’s threat to invoke the Insurrection Act is not what our country needs now,” said Rep. Tom O’Halleran, D-Sedona. “Americans have the right to peacefully assemble.”


O’Halleran, a former police officer, said he was “horrified by videos that show federal law enforcement officers firing rubber bullets and tear gas at peaceful protesters outside the White House” Monday as the president was speaking. That police action, shortly before the start of a Washington, D.C., curfew, cleared a path from the White House to nearby St. John’s Episcopal Church, where Trump walked for a photo holding a Bible after his speech.

But Republicans like Rep. Andy Biggs of Gilbert agreed with the president, who has used terms like “professional anarchists” and “violent mobs” to describe protesters he said are behind the violence.

“President Trump understands that failure to enforce our laws, protect lives and property emboldens criminals and anarchists – and distracts us from the tragic death of George Floyd,” Biggs said in a statement Monday.

Biggs, like Trump and everyone else contacted, made a point of defending the right of citizens to peacefully protest the death of Floyd, which was described with terms like “callous” and “deeply troubling.”

“Our country grieves as one with George Floyd’s family and his loved ones,” Sen. Martha McSally, R-Arizona, said in a statement Tuesday. “There’s no place for this kind of abuse of power by law enforcement in our country who are sworn to protect and serve.”

McSally, like most, said the protesters “have every right to freely assemble, that’s what our country is all about,” but that “the looting and the violence just has no place in our country and our communities.”

She did not comment on Trump’s threat to call in federal troops. But Rep. Raúl Grijalva, D-Tucson, said Trump is escalating the situation and doing nothing to address the underlying issues that led to these protests in the first place.

“This president would rather turn the U.S. military on American citizens than confront the reality that black and brown Americans face at the hands of law enforcement,” Grijalva said in a statement Tuesday.

Rep. Adam Smith, D-Wash, on a call with reporters Tuesday denounced Trump’s “militarization” of the protests.

“I do not think that the proper analogy here is for the president, the commander-in-chief of our military, to declare to the country that he’s decided to use the U.S. military to go to war in cities across the country – to occupy the battlespace,” said Smith, the chairman of the House Armed Services Committee. “Language like that is deeply concerning in terms of how the U.S. military would be used for domestic law enforcement.”

Smith said he plans to call Defense Secretary Mark Esper and Joint Chiefs of Staff Chairman Gen. Mark A. Milley to testify next week on how they would use the military during a time of civil unrest.

For Rep. Paul Gosar, R-Prescott, calling up the military makes sense when “law-abiding Americans are under siege by domestic criminals and terrorists.”

“The president is well within his legal and constitutional rights to invoke the Insurrection Act and restore order,” Gosar said in a statement.

But Rep. Ruben Gallego, D-Phoenix, had a tart rejoinder to that argument.

In a one-line letter Tuesday to the Pentagon, Gallego asked Milley, “Do you intend to obey illegal orders from the president?”