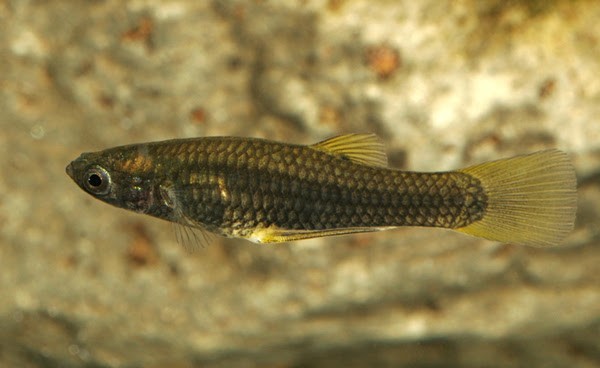 The endangered Gila topminnow is swimming in the newly restored pond at Agua Caliente on Tucson’s east side.

500 Gila topminnows were released into the pond on Wednesday, May 13, by staff from multiple county and state agencies. The fish release, part of the larger Sonoran Desert Conservation Plan, has been years in the making.

The small green and black Gila topminnow once swam throughout Tucson’s water system, but loss of habitat and predation from non-native fish landed them on the endangered species list in 1967. Topminnows survived in sparse populations in the Santa Cruz watershed, such as in Cienega Creek.

“They were in very dire straits in terms of very few natural sites that still had them,” said Karen Simms, Natural Resources division manager for Pima County’s Natural Resources, Parks and Recreation Department. “There’s been a lot of effort in expanding the number of sites that have topminnow in recent years.”

Aside from loss of habitat, one of their greatest threats were the non-native mosquitofish, which outcompete them for food.

“The Gila topminnow actually do just as good of a job at mosquito control, so another one of our goals is to change over the water sources we manage to have topminnow instead of mosquitofish in them,” Simms said.

For decades, staff from agencies like the NRPR, Office of Sustainability and Conservation, and Arizona Game and Fish Department have worked to reintroduce topminnows back into their historical range. Part of this is the recent work at Agua Caliente Park, but the effort was more complex than dropping off the fish.

The main pond at Agua Caliente Park is part of a series of spring-fed wetlands, which were also damaged by human development. Historically, spring flow kept the pond full. But that flow reduced from 2000 to 2014 due to drought and nearby residential developments pumping from the same aquifer. A well was installed in 2004 to supplement the spring flow, but in 2013 the well's pump failed and the pond nearly dried. 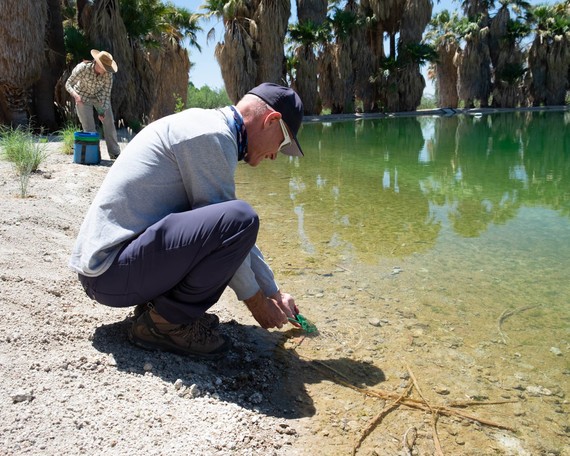 In 2014, Pima County even had to obtain additional water rights to increase pumping for the pond, which by then had tens of millions of gallons supplemented and was pumping 18 hours a day. To ease this burden and allow for the topminnow to be reintroduced, Pima County initiated a pond restoration project in 2019. The restoration included excavating the pond to be deeper, adding sealant to the bottom and sides to eliminate seepage and adding a wildlife island which reduces surface water.

“The main water loss out of the pond right now is through evaporation and transpiration,” Simms said. “Now instead of running the well 18 hours a day, we’re only running it about four hours a day.”

Construction on the pond completed in February 2020 after almost a year of work. In early May, non-endangered fish species were added to test the waters of the refurbished pond. According to Simms, they did well, which allowed for the endangered topminnow to be reintroduced.

“So far those populations are doing really well.” Simms said. “They are a species that is usually very successful in these kinds of reintroduction programs. And I know the Bureau of Land Management has been very successful in putting the Gila topminnow in other pond and wetland habitats adjacent to the streams where they naturally occurred.”

The Gila topminnow population will be monitored by Pima County and the Game Fish Department. If they do well, additional native species are planned to be introduced to the pond. These include the threatened Gila Chub, planned to be added in June or August, and the endangered desert pupfish, which may take a bit longer because it is not a covered species in the Sonoran Desert Conservation Plan.

Since 2001, the SDCP has "guided where public money is spent to conserve important natural areas, providing the basis for how cultural and historic resources are protected, and serving to help insure that our western lifestyle, heritage, and traditions continues."

In addition to restoring native fishes as part of its Aquatic Species Management Plan, the SDCP has also added wildlife crossings over major roads, acquired hundreds of natural acres for research and preservation, and updated animal habitat maps.

The Aquatic Species Management Plan has also introduced Gila topminnow in the Catalina Mountains’ Edgar Canyon and Tucson’s Mission Garden. Both of these populations also seem to be doing well. The NRPR is currently looking at additional ponds and other habitats for future topminnow reintroductions.

“This is a really important reimplementation step for the Sonoran Desert Conservation Plan,” Simms said. “There’s been a desire to have native species back in many of these parks and natural areas for close to 20 years, and it’s exciting to be part of the success we’re having now. We’re giving people the opportunity that they might not otherwise have to see these species in their own backyards.”