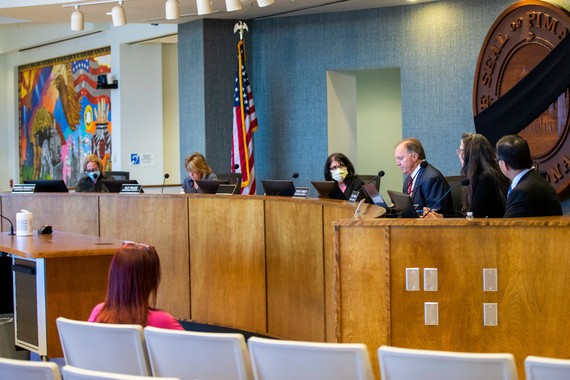 The Pima County Board of Supervisors voted 3-2 Thursday to revise last week's emergency amendments to the county's health code for restaurants and bars after restaurant owners complained the new rules were too burdensome and Attorney General Mark Brnovich launched an investigation into the rules at the request of local GOP state lawmakers.

Today's vote was along party lines, with Democratic Supervisors Ramon Valadez, Sharon Bronson and Betty Villegas voting for the changes and GOP Supervisors Ally Miller and Steve Christy voting against them.

Some of the most significant revisions include removal of the $500 civil penalty, allowing bartop seating as long as six-foot distancing requirements are met and nixing 50 percent occupancy guidelines if physical distancing allows for higher occupancy.

“I think we have adequately captured all of the information that has been provided. I think our revision that we had Tuesday afternoon was based on a large part from the comments we’ve received here,” Pima County Administrator Huckelberry said before reading the revisions. “With all the notifications suggested I believe we would recommend to the board adoption.”

The board also clarified that parties—not individuals—must be spaced 6 feet apart to be in compliance with the proclamation. The county is still requiring parties not to exceed 10 or more people. Servers are not required to wear gloves and only have to follow current health code handwashing policies, instead of documenting each hand sanitization or glove change.

“The specificity of number (to a party) has been left out on purpose,” Huckelberry said. “Typically it’s two, but it could be (more) if we follow the same language in the policy, it’s up to 10 per party.”

Supervisor Steve Christy has been opposed to new rules from the start. Christy said he thinks the board has been “ignoring the 500-pound elephant in the room": Brnovich’s investigation. Should the Attorney General’s Office decide Pima County’s proclamation is in violation of the governor’s orders and rescind it, Christy argues all that time spent was a waste.

“We’ve been struggling with this for some time now and all the while the restaurant business has been struggling even deeper, trying to stay in business while trying to understand with clarity what direction they’re supposed to be following,” Christy said. “The state’s attorney general, and I feel like he would be justified, will probably render a decision that everything that’s been submitted and produced in terms of regulations by Pima County has been in direct violation to the governor’s executive order and he will toss everything out.”

“I noticed you copied this letter to a number of elected officials throughout the region,” Christy said. “My question is why was not any of this letter of yours copied to the members of the Board of Supervisors?”

Valadez apologized to Christy, stating it was “an oversight” on the chairman’s part.

Christy also questioned whether Chief Civil Deputy County Attorney Andrew Flagg had responded to Brnovich’s inquiry by yesterday's deadline. Flagg said he requested an extension until Friday, May 22, since the board delayed last Tuesday’s expected vote on the regulations. However, Flagg failed to notify the board of the extension.

“There seems to be on both the chairman’s part and the county attorney’s part some oversight of some very important details,” Christy said. “I’m hoping that there will be more attention to the details.”