Downtown Restaurants, Businesses and Non-Profits Pull Together to Help Feed Tucson's Service Industry During the Pandemic

Tucson’s downtown restaurant community is teaming up to feed unemployed service industry workers, along with those in need, six-nights-a-week during the pandemic.

Feeding Those Who Feed Us is a non-profit program offering free meals, pre-packaged for pick up for service industry workers - and the community at large - currently struggling to make ends meet. Restaurants like La Cocina, Geronimos Revenge & Forbes Meat Company, Pop’s Hot Chicken, and 4th Avenue Deli are all onboard making sure the downtown community is fed.

“We’re trying to make a lot of comfort food and meals that are easy to eat and could last a day or two in the refrigerator,” said La Cocina Owner Jo Schneider. “We’re serving decent-sized meals”.

Schneider started the program after receiving donations from the community once Mayor Regina Romero’s shutdown order went into effect on March 17. Her two sons, Ben and Eli, also shuttered their popular restaurants - TallBoys and Bentley’s Tea House - instead of offering to-go service (TallBoys has since reopened for to-go service). The Schneider family didn’t want to compete against other restaurants pivoting to carryout/delivery service. But with all the newfound downtime came time to think of how to put those recently received donations to good use.

“We had to close all three locations and layoff over 70 people. My mind was boggled when that happened. I thought,” Oh my gosh...what are we going to do?” said Schneider. “After taking a day or two to process the situation we realized what we wanted to do was feed people.”

The Schneider family, along with La Cocina Bartender Allie Baron, The People’s Defense Initiative, as well as Cream Print and Design teamed up to and set the agenda of the program. Schneider also pitched in a significant amount of her own money to help the program.

“I had already put some money aside for La Cocina to do this initiative on my own,” Schneider said. “But as people started to donate, I realized I needed other people to be able to join forces with me and help figure out how to use the money to best serve the community.”

La Cocina hosts Feeding Those Who Feed Us on Monday, Wednesday, and Fridays from 2 p.m. to 4 p.m. and they typically give out about 85 pre-packaged dishes each day, said Schneider. They even serve vegetarian and vegan options as well. Schneider’s staff also is donating their time to help cook, package, and serve food to the community.

“Making food for our community has been so comforting because it’s something familiar,” said Schneider. “This is what I do for a living. I feed people. When I stop feeding people there is a void in my life.”

Mo Madril, owner of Geronimo’s Revenge partnered with Ben Forbes of Forbes Meat Company to redefine what carnitas can be every Tuesday at Thunder Canyon Brewery from 2 p.m. to 6 p.m. They’re calling the night Carnitas for the Community.

“My idea was to do carnitas in different ways. Why not do something to make people think differently about carnitas,” Madril said. “We’re just trying to mix it up and serve ‘em to anyone who needs them. If you need food, come by...we’re going to feed you.”

Forbes has been the benefactor keeping Madril knee-deep in pork-butts for his carnitas creations. The butcher said he wanted to give back to the community that has supported him over the years. He sells to restaurants and to the public. Business “exploded” when grocery-store shelves ran out of proteins, Forbes said.

“(The service industry) always rallied to support me. Now that the shit is hitting the fan it’s my turn to help out,” Forbes said. “As long as this COVID thing is going on we’re going to keep doing it. If a lot of people pitch in, a lot can get accomplished. 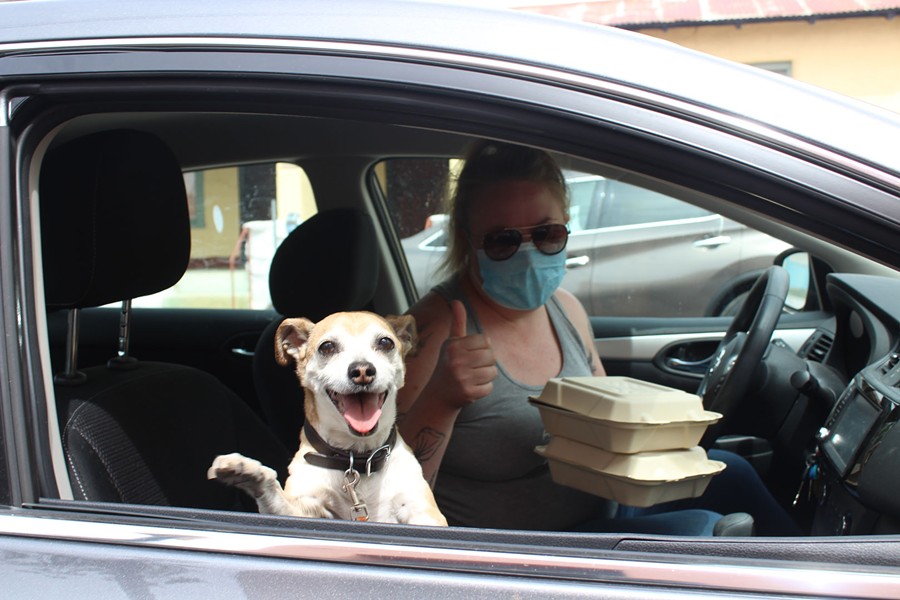 4th Avenue Deli, along with generous meat donations from Quality Deli Provisions, is giving out 25 pre-wrapped sandwiches - turkey, roast beef, and veggie - on Thursdays until the supply runs out. Pop’s Hot Chicken is also giving out their delicious take on Nashville hot chicken on Sundays at American Eat Co.