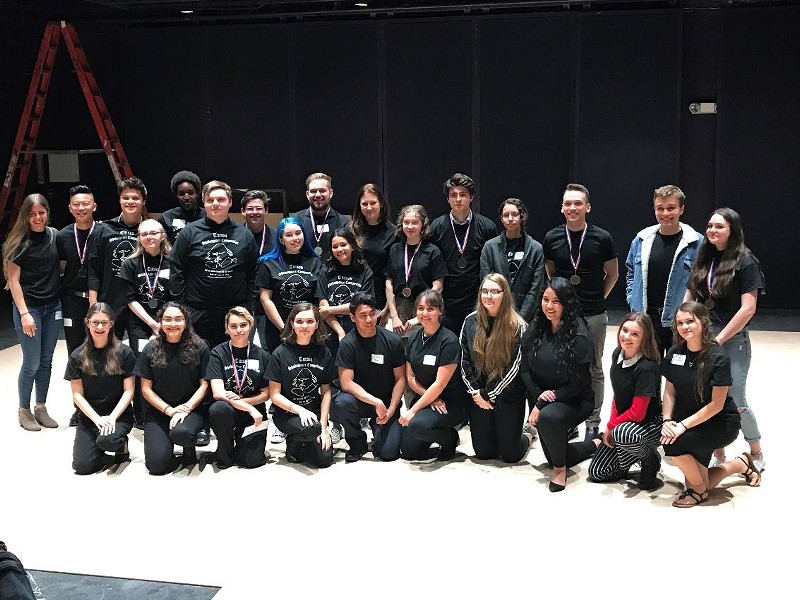 When Marana High School senior Matthew Glasshoff looked through a collection of monologues for this year’s Shakespeare competition, he was searching for a role he’d never before played.

He found that part in 20 lines from a scene in Titus Andronicus, a play involving the eponymous Roman general, the queen of the goths, their children and a lot of revenge killings. Some would call it a dark tale.

For Matthew, it was perfect. He plays Aaron the Moore, lover of Queen Tamora, and a rather sinister man.

In his brief performance, Matthew’s character is asked to repent for his numerous sins—or face death. Instead of a confession, Aaron delivers a devilish recounting of his misdoings in an attempt to scare his captors.

“I’ve done a lot of theater in my time, and I’ve never really been the bad guy,” Matthew said. “When I read (the monologue), it just seemed cool to me. It was like something you would see in a modern movie.”

The performance earned him first place at Marana High and a spot at the Feb. 29 Tucson competition, which he also won.

The English-Speaking Union was founded in 1920 and is a nonprofit, nonpolitical organization promoting “English as a catalyst to foster global understanding and good will by providing educational opportunities for students, educators, and members,” according to its mission statement.

According to Marana High School Theater Director Heidi Barker, the Shakespeare competition provides a great opportunity for the students to grow as thespians.

“They learn so much about performing and all of the kids when they start, they think about Shakespeare and think they’re not going to understand, that they can’t do it, but they gain such a deep and rich understanding of the text and see the potential of the words,” she said. “It’s really cool.”

The national competition normally includes a trip to New York City to perform, but in light of COVID-19 things are a little different this year. Instead of an in-person finale, Matthew and the other contestants submitted video performances.

Despite missing out on seeing The Big Apple, Matthew called the opportunity “a huge deal.”

“It was hard for me at first; I was excited to go to New York and have a vacation,” he said. “But it’s still super cool because I still get to represent Marana and my school. It makes me proud to be able to do that.”

Finalists in the competition compete for cash prizes and the opportunity to attend a summer drama program. This year, contestants are also competing for a People’s Choice recognition for an extra bit of cash.

For the finale, Matthew also had to record a performance of a Shakespearean sonnet (a 14-line poem with formal rhyme schemes). He chose sonnet 91 because it contrasted well with his monologue. Instead of retelling the crimes of an evil man, Matthew expresses his love.

To help prepare for the two performances, he even practiced his monologue while basked in red LED light, and his sonnet in pink.

The 2020 competition isn’t Matthew’s first. He participated last year but didn’t make it very far. He called his junior year performance a great learning experience. He realized that if he wanted to make a serious run, he would need to make sure he can portray the words in context, utilize good diction and command the audience’s attention.

Matthew said this year’s contest was a much different experience considering school closures. He was at first worried that the cancellation of the New York trip would spell the end of the contest and then had to contend with performing without a live audience.

Despite the different circumstances, Matthew said he’s happy with his submission.

“I feel really good about it,” he said. “It was a long, tiring process. I think I filmed it about six or seven times, and by the last time I was getting a little frustrated, I’m not going to lie. But I think that it helped, that I was frustrated because I was able to channel that evil, angry emotion.”

Even though Matthew isn’t traveling to New York City for the performance, his mother Lauri said the whole process is still very exciting.

“It’s nice to see his talent validated by people who really know a lot about Shakespeare and theater,” she said. “It’s just really rewarding to see your child succeed in something that they’re so passionate about.”

Matthew plans to attend the University of Arizona in the fall and study statistics. He intends to keep acting, with an interest in community theater.

Watch Matthew’s performance at this link. To vote in the People’s Choice Awards text “NSC” and the number of the contestant’s video to (212) 818-1200. To vote for Matthew, text “NCS23”. Only one vote is accepted per phone number. Voting closes at midnight next Thursday, April 23. The winner will be announced April 27.