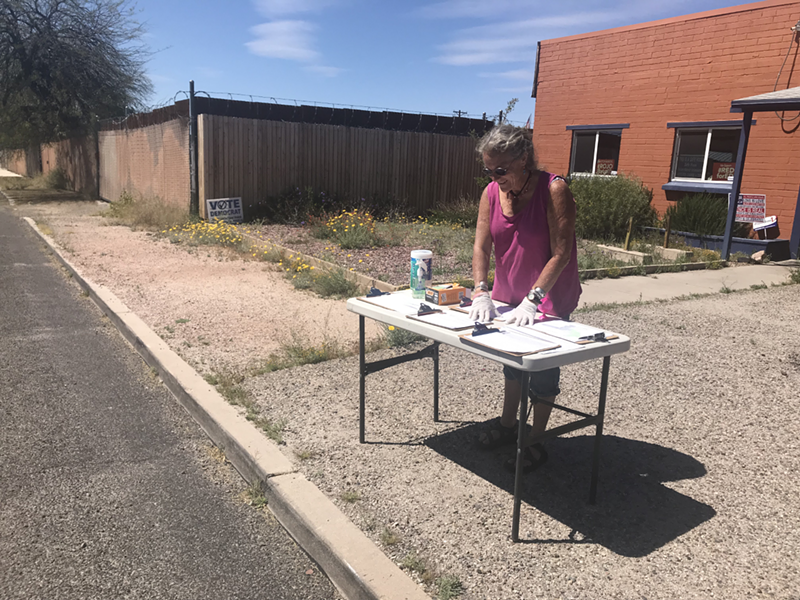 There are now six candidates running for the Pima County Board of Supervisors District 5 seat—and they have less than five days until the signatures are due at 5 p.m. on Monday, April 6.

To help the candidates make the tight deadline, the Pima County Democratic Party is setting up a drive-up signature-gathering event in front of their headquarters for District 5 candidates who have already delivered blank petitions to the party HQ. Petitions will be available to sign between 11 a.m. to 2 p.m. today through Saturday.

“We’re only (collecting signatures) for the District 5 office because of the special circumstances with Richard Eliás’ passing,” said Alison Jones, chair of the Pima County Democratic Party. “The candidates are still going to have to do much of the work themselves. This is not going to get any candidate the signatures they’ll need.”

The Democrats are currently collecting signatures for Adelita Grijalva, Consuelo Hernandez and Trista Tramosch Di Genova-Chang. Miller, who is active in the Midvale neighborhood association, is expected to drop off his petitions to be signed today, Jones said. Washburn, who serves on the Tucson Water Advisory Committee, also dropped off petitions to sign.

“We’ve reached out to all of the candidates and let them know this service is available,” Jones said.


Gathering hundreds signatures in less than a week would be a trying feat during a normal election year. But signature gathering during a global pandemic, coupled with Gov. Doug Ducey’s statewide stay-at-home order is on another level of difficulty. Jones said the ultimate goal is to help voters continue to participate in the elections process and practice their constitutional right to free speech during this unprecedented time.

“We consider signing a petition free speech under the governor’s stay-at-home order,” Jones said. “We’re just trying to offer another method for voters and we’re doing it in a safe way to practice social distancing.”

Volunteers gathering drive-up signatures outside headquarters are required to wear gloves and wipe down tables, pens and clipboards after each use. They also strongly suggest signees bring their own pen for added safety. Signees are expected to know who they are signing for, said Jones.

“People don’t have to get out of their car and certainly don’t have to get within six feet of another person. We’re making sure the items are clean,” Jones said. “We are not telling them which petitions to sign. They’ll need to know who they’re signing for when they get here.”

Originally, Elias’ only challengers were Republican Fernando Gonzales and TUSD School Board Member Rachel Sedgwick, who was running as an Independent. However, Sedgwick decided to run off to Jamaica and get married instead after withdrawing her candidacy in January. (Congrats, Rachel!)

Trista Tramposch Di Genova-Chang filed her paperwork to run for District 5 in November 2019. She has also filed to run for Pima County Sheriff in the 2020 election, as well.

Grijalva said the decision to run is “emotionally difficult” because the Grijalva political machine was getting ready to host Eliás’ campaign kick-off party for the general election.

“We haven’t had an opportunity to mourn (Eliás), either,” Grijalva said. “I spoke to both Emily and Luz Eliás, who told me, “You have to do it. We can’t lose the seat who doesn’t care about the things Richard cared about.”

Grijalva said gathering 200 signatures in less than a week typically wouldn't be a problem, but she and her team are having to get creative to get petitions signed during the shut-down.

“I’m delivering petitions outside people’s homes who have got in touch. I’m out there with gloves, Lysol, and the petition in and envelope,” Grijalva said. “I leave it at their door, text them when I’m done, wave from afar and pick it up when it's ready. They can mail it back to me too.”

Grijalva is also hosting drive-up signature gathering outside Grijalva headquarters on St. Mary's Road soon, she said. But in the meantime, delivering petitions to individuals is her preferred method.

“Collecting signatures during a pandemic is crazy,” Grijalva said. “It’s down to, “Do you want to sign my petition? Great. You have just one person? Awesome. Then we come out and bring (the petition) to you.”

Hernández also filed her Statement of Interest, along with her Statement of Organization with the Pima County Elections Department the same day as Grijalva. Hernández did not respond to several requests for an interview, but her petitions are available at Democratic headquarters.

Neither Washburn nor Miller could be located for an interview.

All candidates are invited to reach out directly to austin@tucsonlocalmedia.com.