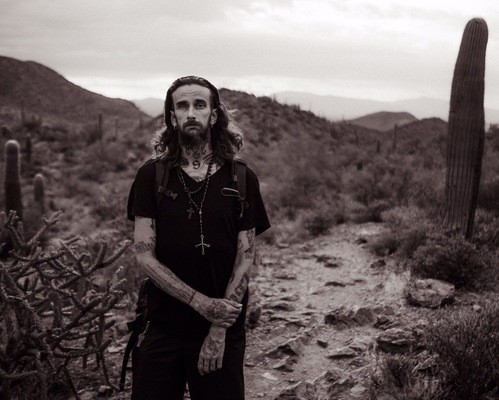 Born on August, 2, 1979, Isaac Kirkman grew up in Greenville, South Carolina into a military family who moved about regularly.

In a 2015 interview with Cynthia Dagnal-Myron, for The HuffPost, Kirkman described his hometown as a place where “the Civil War never ended.” He encountered bigotry and intolerance. “I was an alien to this world,” he said. “And was treated like one. Bullied. Humiliated. But I was determined to write my way to a better life. I would write my way to freedom.”

"I’m from where the dead vomit red clay/in a seashell splatter, of kudzu and black confetti/where you can hear the sound of slave chains/in the soft foam of surf crashing onto Charleston’s shores/as little white kids with confederate flags/flapping from their bikes, ride happily into the sun/dreaming of the day the south shall rise again/See, I’m from where plantations turned into prisons/the way HIV turns into AIDS/And every cop is a doctor trained to prescribe bullets/to black children and call it the cure.” –Isaac Kirkman click to tweet
He spent part of his youth living on the slopes of an active volcano in Sicily, where a beloved teacher, Signora Longo, told him how St. Agatha used breast milk to protect Catania from the volcano’s destructive flows.

A gifted child, Isaac painted and drew, eventually gaining admission to the Joe Kubert School of Cartoon and Graphic Art in New Jersey.

He also spent long years in the American hospital system, where he was diagnosed with Ehlers-Danlos Syndrome, a hellish genetic condition that causes progressive deterioration of connective tissues throughout the body and intractable pain. He also struggled with depression throughout his life.

A decline in health prompted him to turn his focus to writing. “There remain obstacles,” he said. “But I will make art from them.”

Possessing an open and inquisitive mind, he pored over psychology and occult texts.

Isaac never drove a car. He spent a lot of his time walking, taking in the urban landscape in different ways and always observing.

A troubled teen, for a time he lived on the streets. “I always had a notebook on me,” he said. “Writing on the couch as my friends sold drugs out the front door, sleeping outside, writing descriptions of the junkies and the outlaws, writing metaphors to capture the agony of the ghetto, and the ecstasy of God.”

He found his heart and words—depicting the human struggle towards redemption—on the streets.

After moving to Tucson, Isaac would often walk the streets, in the scorching heat and torrential rains, it mattered not. He'd leave votive candles on shrines and the sites of recent homicides,. “to pay respect to the spirits and religions of the barrios, honoring their losses as well as my own,” he said.

Here in Barrio Santa Rosa, where he lived, he got on the path to sobriety and enrolled in his first and only writing class at The Writers Studio. Soon afterwards he had his first piece of fiction published.

“I never gave up on writing because it was my destiny,” he said. “Because I had to tell the stories of the forgotten. I didn’t come to this through academics. I came from my own grave. I have been beaten humble and beaten pure.”

Isaac’s poetry and prose have appeared in numerous journals: Waxwing, Huffington Post, Thuglit, Tucson Weekly and many others.


He served as a board member for the Tucson Poetry Festival, Words on the Avenue and co-founded The Reading Series, a literary event that now exists as part of his legacy.

He was a poet, writer, mystic, activist and a soul not of this world.

Benjamin Isaac Kirkman passed away from heart failure on Jan. 2, 2020 in Nogales, Mexico, in the borderlands he so loved.

Following a reading at Words on the Avenue—where the microphone was taken off the stand and handed to Isaac directly, a sign of respect in poetry circles, allowing him the last words—Dagnal-Myron sent nationally acclaimed poet Patricia Smith copies of the poems she had just heard, to confirm that she had been in the presence of genius. After spending hours pouring over Kirkman’s words, reading them out loud, over and over again, Smith concluded, “...he should always have the last word.”

So, it is fitting to do so once again.

Isaac once said of Ehlers-Danlos Syndrome: “It is an aspect of me, but it does not define me. I view it as spiritual lesson from my creator to strengthen my spirituality, gratitude, and empathy through pain. I don’t ever feel like I am really in my body. I am a ghost.”