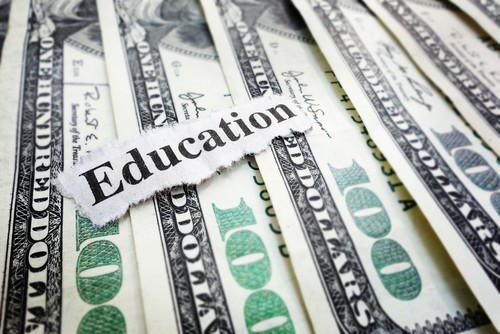 "This is an impressive crowd - the haves and the have-mores. Some people call you the elites. I call you my base." George W. Bush

Bush made the comment at a high-rollers charity dinner where presidential candidates poke fun at themselves and their campaigns. Like any good self-deprecating joke, Bush's quip is on the money. In this case, literally on the money.

The HHM, the haves and have-mores. They're as much Doug Ducey's base as they were George Bush's. You see their fingerprints all over Ducey's education agenda. When he favors tax cuts over bringing schools back to their 2008 funding levels, that's all about the HHM. And he was thinking about their children when he created the results-based funding scheme. The way the funding is given out, the HHM's children are nearly certain to come out winners.

In my last post I compared how much results-based funding went to students in TUSD, Vail and the BASIS charter chain. Vail, it turns out, gets more than three times as much per student as TUSD. With one exception, every BASIS school is fully funded. That's because funding is based on the percentage of a school's students who pass the state's high stakes test, which is right in the wheelhouse of schools in high rent areas. For a district like TUSD which draws from many families living below the poverty level, passing the state test and qualifying for the funding is more hit-and-miss.

In a world where Ducey is governor and the legislature is majority Republican, the rich get richer, and their children get a richer education courtesy of results-based funding.

I decided to take a deeper dive into the data to see how the money is distributed to schools with children across the economic spectrum. I found funding inequities everywhere I looked.

Before I lay out the numbers, here are a few things I know for sure.

• A school doesn't deserve results-based funding just because it has no more than 10 percent of its students living below the poverty level.

• Any competent computer programmer could create a system for giving out the results-based funding in a more equitable way.

I divided schools into ten groups based on the percentage of students living below the poverty level. Here's how many schools get funding in each group.

This is what jumps out at me from the list.

Every school with less than 10 percent of its students below the poverty level qualifies for results-based funding. From 11 to 20 percent, half the schools qualify. That means the children of the HHM are almost certain to be in a school that gets a $225 per student bump.

The percent of schools getting the funding drops with each group until it hits 3 percent for schools in the 51 to 59 percent range. Then it takes more than a 10-fold jump for the 60 percenters, to 37 percent. That's because the passing rate needed to get the funding drops at the 60 percent level, so more schools qualify. From there, the percent of schools getting funding continues its downward slide.

If it makes sense to increase the number of schools that receive results-based funding for schools at the 60 percent poverty level, it makes just as much sense to increase it for every school in the other groups getting slighted by the funding system. About 25 percent of the state's schools get results-based funding. For the system to be equitable, every group should hover around 25 percent.

We live in the age of computers. Even a second rate programmer could adjust the funding system to make it more equitable, and I'm sure the legislature and the Department of Education both employ some first rate programmers. They just need to create a sliding scale that changes with schools' poverty rates.

I don't expect to see any significant changes in the system, though, because . . . well, here's one more thing I know for sure.

If Ducey and his fellow Republicans could get away with it, they would make sure every penny of the results-based funding goes to schools filled with the children of the HHM. That's why Governor Brewer tried to create the system in the first place and Ducey made sure to push it through. But they don't dare be that obvious, so they do the best they can. They make sure children in high-rent schools get the funding, then give out enough to other schools to make it look like they system is on the level.