Wilmington, Tulsa, Orangeburg And The Blackout of Black History 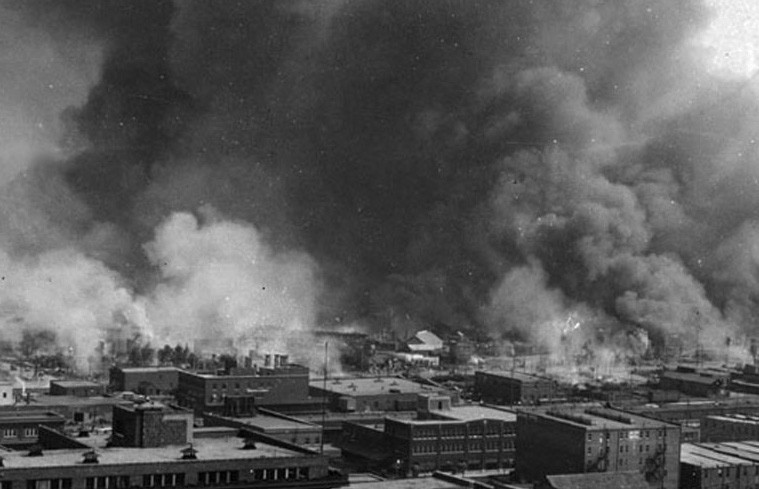 The main reason I began watching HBO's new series, Watchmen, was because I heard the show incorporated the 1921 Tulsa Race Massacre as a central part of its narrative. (And, I should add, I'm a fan of comic-book-noir television series.) The show is set in Tulsa, Oklahoma, in an alternative present where descendants of the Massacre receive reparations — you know right there it's an alternative reality — and an underground group of white supremacists is waging war on the city's black population and the police.

The Tulsa Race Massacre is one of many horrifying chapters in this country's racist history. It is made that much more shameful by the fact that it has been purposely omitted from our historical narrative, as have many similarly horrific events. The 1898 Wilmington Massacre was misrepresented for decades as a victory of whites over a black uprising, when it was spoken of at all. The more recent 1968 Orangeburg Massacre was largely ignored and misrepresented by the contemporary press and has been little spoken of since.

I didn't know about the three events until recently. I would feel more ashamed of my ignorance of these and, I'm certain, other examples of large scale, racially motivated violence, except that I can't really blame myself for not knowing about what has been blacked out of the historical record. That being said, I willingly accept the collective guilt and shame for the white, "history is told by the winners" rendition of history which has glossed over, misrepresented and left out some of the greatest outrages perpetrated against minority groups in this country.

I have been working to remedy my ignorance for at least a decade. I posted about the Wilmington Massacre last year when I stumbled on a mention of it and did some research. Watchmen was my link to the Tulsa Race Massacre. I only learned of the Orangeburg Massacre a few days ago by chance when I was reading some biographical information on one of my favorite newspaper columnists.

Below are brief summaries of the three incidents with links to more complete histories.

In the late nineteenth century, Wilmington was the largest city in North Carolina and home to a large, reasonably affluent and educated black populace. The state's Republican Party, which at the time deserved the label "the Party of Lincoln," had joined with the Populists to form the Fusion Coalition. By 1894, the Fusion party had taken the governorship and every other statewide office. Blacks served in local and state governments.

The Democrats stirred up racial resentment in the state in an effort to gain power. In 1898, the Wilmington "White Man's Rally" held daily marches through black neighborhoods shooting into buildings, after which they were greeted by a thousand people who held a picnic in their honor. A week after the marches began, 2,000 vigilantes stormed into black neighborhoods, destroying property and killing up to 300 people. In what can only be described as a massacre followed by a coup, the leader of the white uprising became mayor and remained in office until he died seven years later. Fusion party leaders were banished. More than 2,000 black people left the city permanently.

For years, the Massacre was cast as a victory for whites over a black uprising. It took a century for the story to be told accurately.

Known as "one of the worst incidents of racial violence in U.S. history," the Tulsa Race Massacre took place in Tulsa, Oklahoma's black Greenwood neighborhood, which included a business district prosperous enough to be called the Black Wall Street.

A black youth was arrested on the accusation that he sexually assaulted a white woman (The charges were dropped hours after the massacre was over). A white mob outside the courthouse demanded the sheriff hand the youth over to them. In an attempt to protect the suspect, 75 armed black men went to the courthouse and were met by 1,500 armed white men.

In the morning, thousands of whites went into the black neighborhood.


"According to a later Red Cross estimate, some 1,256 houses were burned; 215 others were looted but not torched. Two newspapers, a school, a library, a hospital, churches, hotels, stores and many other black-owned businesses were among the buildings destroyed or damaged by fire."

As many as 300 black residents died in the violence.

The actual events were hushed up. The local newspaper removed stories it wrote in the days after the massacre from its archives, and police and state militia records of the incident went missing. It took 50 years for scholars to unearth the complete story.

Since 2004, history classes in Oklahoma have been teaching about the incident, though a bill requiring high schools to teach about the event failed to pass the state legislature. What was once called the Tulsa Race Riot has been more correctly renamed the Tulsa Race Massacre.

The Orangeburg Massacre was not on the same scale as the Wilmington and Tulsa events. Three students were shot and killed and 28 were wounded during a protest on the predominantly black South Carolina State University campus. However, two moments in history which bookend the massacre heighten the injustice of glossing over the incident. First, the massacre occurred four years after the passage of the Civil Rights Act, at a time when the civil rights struggles which led to the law were still fresh in people's minds. This should have been part of a wakeup call reminding the country how much still needed to be done. Second, it happened two years before the shooting at Kent State University in Ohio where four students were killed during an anti-war protest. Kent State made worldwide headlines. Orangeburg received little attention.

Orangeburg, South Carolina, has two predominantly black universities and one of the most educated black populations in the south. In 1968, a group of university students held a protest outside a bowling alley with a whites-only policy. More students joined the protest in subsequent days. A number of them were beaten by police with billy clubs.

Days later, the protest moved to the South Carolina State University campus where hundreds of students protested the segregation of local businesses. National Guard troops and members of local law enforcement were positioned to stop the students from taking the protest beyond the campus. The students lit a bonfire, taunted police and threw rocks. After an officer was struck, some police opened fire, killing three students and wounding 28 others, many of whom were fleeing and were shot in the back.

Nine police were charged. All were acquitted. Cleveland Sellers, a civil rights activist, was sentenced to one year of hard labor on a charge of inciting a riot.

The massacre got little press coverage, and some of it was wrong. For instance, the Associated Press reported incorrectly that the students were armed and exchanged gunfire with the police. It received little coverage by historians. In 2003, Governor Mark Sanford issued a formal apology about the incident.

I read about the Orangeburg Massacre when idle curiosity led me to look up the biography of the newspaper columnist Eugene Robinson. I found that he grew up in Orangeburg and was in his first year of high school when the massacre occurred. A few years later during his freshman year at the University of Michigan, he wrote an essay about the event. It won a student literary contest, which resulted in him changing his focus from architecture to journalism.

Robinson has worked as a reporter at a number of newspapers. Currently he writes a column in the Washington Post. He won the Pulitzer Prize in 2009.