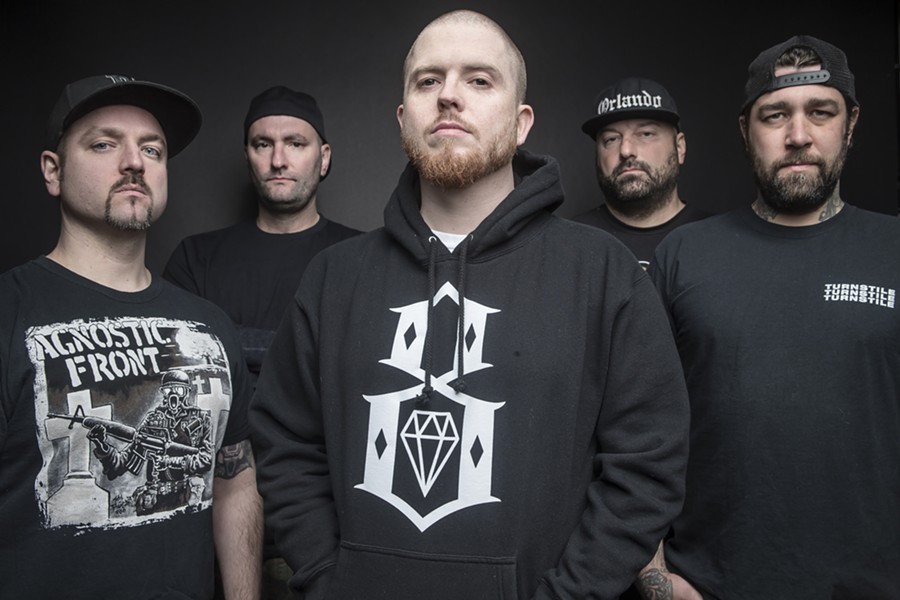 Celebrating 25 years of metallic-tinged mayhem, "Looking Down the Barrel of Today," these veteran metalcorists truly "Live For This." Hatebreed enter The Concrete Confessional at EncoreTucson...

Brasshouse? Huh. Forged in the depths of NYC's dank subway system—powered by saxophone, trumpet, synthesizer and samples all backed by wicked street beats—Too Many Zooz is accessible, yet, unlike anything you've ever heard. At 191 Toole. Thumpasaurus adds a deep wallop to the night's affairs...

"I feel right at home in either." Born in Texas, with roots in Chihuahua, Mexico, this Mexican-American Norteño/Tejano singer/accordionist's sound spans borders. Yes, it's a life of "Honky Tonks & Cantinas" for Michael Salgado. At Club 4th Avenue...

Filling the existential void with melody, groove and that intangible something, The Unday and Heroes Reunion reunite at the Surly Wench Pub...

Giving soul to the universe, wings to the mind, Still Life Telescope, Saint Augustine and Peppermint Hippo peer through the donut hole. At Irene's Holy Donuts...

Featuring flatpicking champion Peter McLaughlin, multi-instrumentalist Alvin Blaine and Lex Browning (Poco and The Decemberists), Canyon Currents make their debut on the stage at Monterey Court for an evening of bluegrass and traditional music. North Carolina based duo Flatbridge open the show...

Out of Tucson, "Boss Talk[in'] (ALPHA)," hip-hop and rap up-and-comer J. Reece spits rhymes at Encore Tucson. With special guest/notorious gangsta rapper X-Raided, who managed to release more than 20 recordings—some were recorded over the telephone and others using a DAT recorder which puzzled prison officials because "inmates are not allowed to have tape recorders"—while serving 26 years of a 31-year sentence for murder...

Performing on harp and viola, enigmatic netherworld enchantresses, The Hatpin Duo answer The Call of the Faeries when they take over downtown...

Guitar chugging away, his stories tell of a hardscrabble life while the wallop of his kick drum sets an energetic pace. Rockabilly raconteur Al Foul is in the courtyard at Mercado San Agustin...

It's been a Crazy Road Trip for Eric Schaffer & The Other Troublemakers. They bring that freewheeling madness to La Cocina when they perform acoustic sets of folk, Americana and a smidgen of country... Rhythm & Roots presents the distinct bluegrass stylings of The Sonoran Dogs Big Band. On the plaza at Hotel Congress...

Singer-songwriter Joe Peña's distinctive blues songs bear enough heart to prompt St. Peter to give this sinner a pass. He performs as part of Glow! A Nighttime Art Experience at the Triangle L Ranch... Whet your appetite with the aromas and sounds— funk, jazz and blues—of The French Quarter. The Muffulettas dish up at Monterey Court...

From Portland, Boygirlboy promise a night of saccharine sweet indie-pop. At Club Congress Flanked by Night Weather and Bogan Via...

"His Words, My Music, My Way." Paul Anka Sings Sinatra. At the Desert Diamond Casino...

Mexican Institute Of Sound, Orkesta Mendoza, Vetusta Morla, Chetes (of Mexrissey), Mesquite and DJ Buttafly round out the lineup for RazaFest. On the plaza at Hotel Congress. With an after-party—featuring cumbias from Tlalpan, Marco Carrión y amigos. And a DJ set by Camilo Lara and Joey Burns—at R Bar. Proceeds to benefit No Mas Muertes...

Sophie Hawley-Weld and Tucker Halpern's hit single "Drinkee" is sung in Portuguese. Hawley-Weld clarifies, "It doesn't matter whether or not you can understand Portuguese. The point of "Drinkee" isn't the meaning; The point is the nonsense." EDM artists Sofi Tukker "Swing" into the Rialto Theatre for a lil' sip. With Haiku Hands and LP Giobbi...

On "LOUD (Fuck It)," from Graveyard Shift (Roadrunner Records), Chris "Motionless" Cerulli offers up self-help advice with Goth-metal 'tude. "You gotta be loud/You gotta be rude/So the world can hear you/Say 'fuck it'/Make the best of it." Motionless In White brings the Trick 'r Treat Tour to EncoreTucson. With Twiztid, We Came As Romans, and After the Burial...

Like "Dust In A Baggie." Imbuing sugarcubes of psychedelia into a traditional art form, virtuoso Billy Strings applies the intensity and fretboard histrionics of heavy metal to bluegrass. At 191 Toole...

Chaparral Kirtan celebrate the full moon through an offering of devotional music and mantra. At Tucson Yoga...

Rufus Wainwright has been hailed as "one of the great male vocalists, composers and songwriters of his generation." The Fox Theatre is the site of Oh Solo Wainwright: An Evening With Rufus. The 21st-century country of Robert Ellis warms the crowd...

Community Info Do This! Music XOXO music rock songwriters concerts do this
Prev
Next