Arts and Culture Books Cinema Do This! 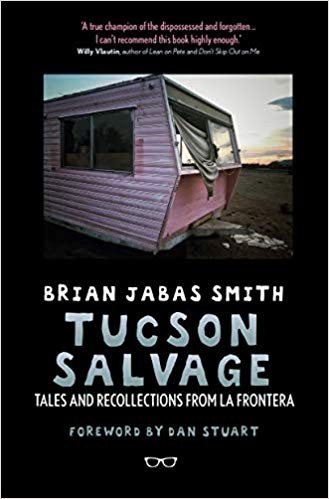 Join Pima County Public Library for a screening of Maggie Smith’s award-winning short film Tucson Salvage The Documentary, inspired by the book "Tucson Salvage" by Brian Jabas Smith. Following the film, Brian will perform a reading from his book and host a discussion.

Brian Jabas Smith is an award-winning journalist, editor and the author of "Spent Saints & Other Stories" and "Tucson Salvage: Tales and Recollections from La Frontera."

Maggie Smith is a filmmaker, writer, mother and human rights activist. She has adapted, co-written and executive produced the web series Spent Saints and co-written and directed the festival-winning documentary Tucson Salvage.

Tucson Salvage is based on Smith’s columns for the Tucson Weekly. Offering sharp, empathic commentary on diverse subjects, Smith channels the people not usually seen or valued in society, and in doing so, holds a mirror to us all. The Asheville Scene called it “an artful collection that reads like the diary of an observant poet.”

Tucson Salvage the Documentary is a 30-minute meditation on five humans profiled in Smith’s columns. Forged by adversity and united by humanity, the people in this documentary allow us to witness those we might never approach and hear them tell their own life stories.

Brian and Maggie have traveled across the United States stunning audiences at such well-known places as The Hudson Theatre in Los Angeles, Elliot Bay Bookstore in Seattle, Bookbeat in Detroit, and Malaprop’s Bookstore in Asheville.

This event is free and open to the public. Copies of "Tucson Salvage" will be available for sale. For more information visit library.pima.gov or call Infoline at (520) 791-4010.