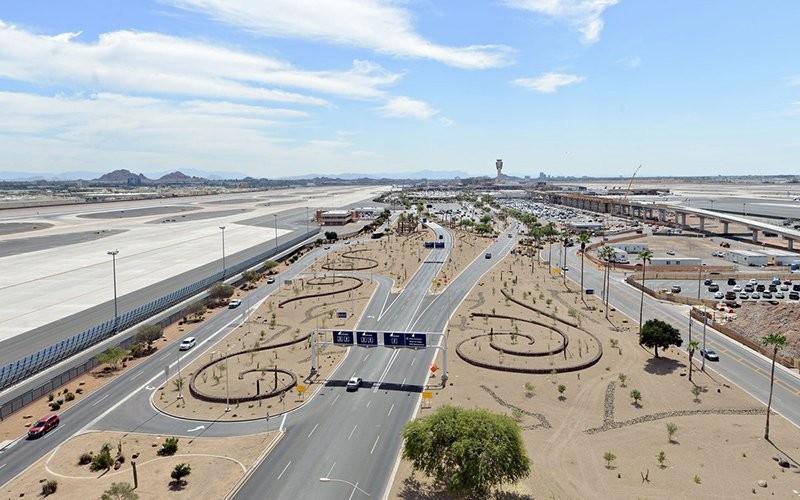 PHOENIX – Some of the landscaping at Phoenix Sky Harbor International Airport has changed from front-lawn green to desert tan. The airport recently finished replacing nearly 11 acres of turf with native flora as part of a water conservation project that’s expected to save nearly half a million dollars a year.

The landscaping approach is known as xeriscaping, which uses native, drought-resistant flora arranged in ways that promote efficient water usage. The airport project incorporated 435 water-sipping trees, 75 saguaros, 275 other large cactuses and about 2,900 plants and shrubs for groundcover, according to a release from Sky Harbor.

The xeriscaping project is expected to save the city $400,000 annually, in addition to reducing water usage by more than 5 million gallons per year.

“You see in people’s houses, you see it in other natural landscaping because it fits here,” Sky Harbor public information officer Greg Roybal said. “I think the water services director said it best when she said we honor our environment when we plant things that belong here.”

The redesign, completed in June, is part of the airport’s 2015 Sustainability Management Plan, which aims to reduce water consumption by 10% by 2020. Sky Harbor currently uses an average of 30 million gallons of water per month.

“You want to be very strategic about where you use your water,” he said. “Like, there’s not that many people who walk to the airport and walk along beside the freeway, so having grass there might not be a good spot for grass.”

The xeriscape project is one of seven initiatives in the airport’s sustainability plan, which also focuses on air quality, energy use and waste management.

Because less maintenance is needed on those 11 acres, the project also falls in line with Phoenix’s pledge to reduce greenhouse gases by 30% by 2025.

“It fits in perfectly with not only our overall goals but with the city’s goals and the community’s goals,” Hartman said. “I think it’s going to be looked at as a prime project to model after.”