Supervisors' Approval Allows Eastside Bike Ranch To Get Into Gear

July 02, 2019
7 comments
A 45-acre development for cyclists in Saguaro National Park East received the green light from the Pima County Board of Supervisors Tuesday morning.

The Bike Ranch development, which is the brainchild of Tucson-based developers Kelley Matthews and her husband, Peter Lasher, was approved by a 3-2 margin. Supervisors Steve Christy, Ally Miller and Ramón Valadez voted for the granting of a mixed use permit. 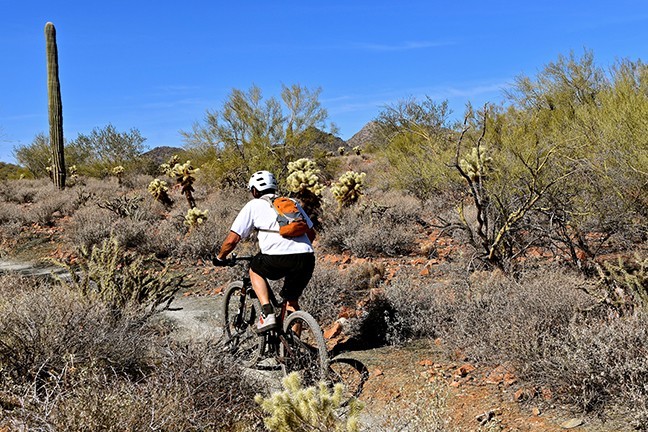 The property is slated to be built within the buffer zone of Saguaro National Park-East on Old Spanish Trail, near Escalante Road.

The opinions of the supervisors and audience members on the development, which was previously proposed and subsequently postponed before coming to a vote in 2014, were varied.

Both Supervisors Sharon Bronson and Richard Elías spoke out against the proposal, with the latter taking great exception to the development.

“In many ways, I like the idea,” he said. “I like all the specifics about it, but that doesn’t cut it. So, it’s about location and the location is problematic and there’s nothing that you can do to fix that.”

Christy said the proposed minor resort, which includes 49 casita-style rooms, a 34-foot-tall “bike barn,” a 79-space parking lot, pool, outdoor seating and a restaurant and café, will serve the county well in the long run.

“I feel that this whole project has met the checkboxes of the rules, and the rules have been governed by regulations and refereed by officials,” Christy said. “They’ve met all the criteria and answered all the questions. It meets the badge and the image that Pima County is trying to maintain as a bicycle mecca. This is a project that I believe in and that I feel is good for Pima County.”