Laughing Stock: Spaghetti ala Comedy; The O in Locals 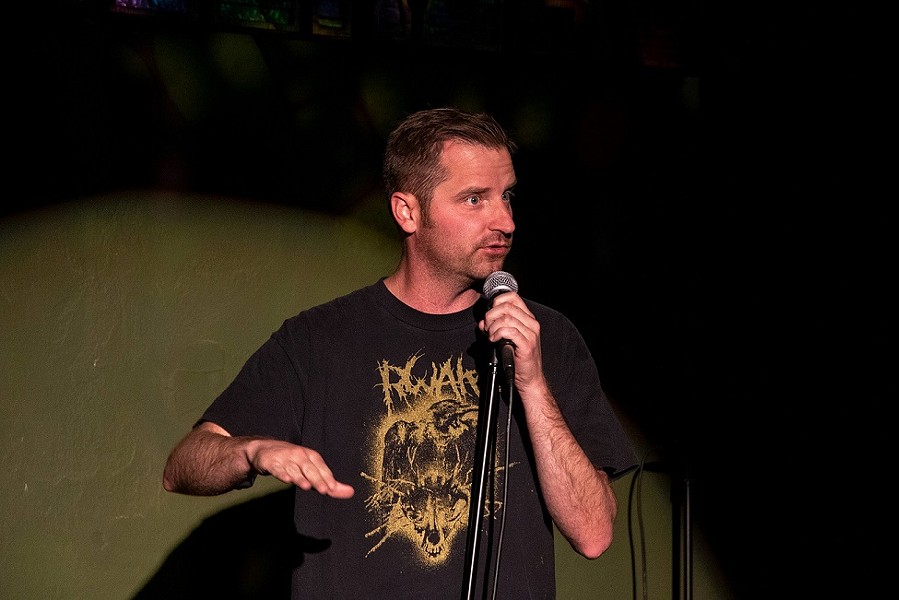 Say Hello To My Little Friends!

Tony’s New York Style Deli may not be the least likely place for a comedy show. More than half a dozen local comics live nearby. Roy Lee Reynolds, for instance, says he eats there all the time. He has in fact eaten the whole menu.

And Reynolds has a penchant for putting comedy in unlikely places. With fellow comedian Julian “Jules” Moreno, he’s taken Tucson comedy to Benson and Douglas. With a handful of other comedians, he’s run an eastside open mic at a favorite Tucson dive, The Music Box.

Still, the tables with their red-checkered cloths are smallish and separated by almost squeeze-by spaces. Shelving overruns the walls with imported sauces, the color of tomatoes only grown in Italy, and glassine-sealed pastas with names ending in -ini, -ella, -ette. Cold cases hold rough-edged cheeses and hard-cured meats. Jars of olives and stuffed peppers stand in rows with Italian-village charm on their blue labels. Where would they even put a mic stand?

Unlike its namesakes on nearly half the corners of apartment-building-lined streets throughout New York’s five boroughs, Tony’s New York Deli has a Tucson-sized patio. It’s there that, six months ago, Reynolds, and his colleague in comedy Dom DiTolla, first tried to out-Al-Pacino each other. No doubt they were inspired by their surroundings, but if your first thought was that DiTolla should have an advantage, you could be a racist.

Gimmick in hand, Reynolds booked a comedy show for 8 p.m. Saturday, June 8. What followed was a stream of memes about the Al Pacino challenge, ranging from the sublime to the ludicrous. A favorite features a photo of “Junior” Soprano with the caption, “Dom DiTolla doesn’t have the makings of a varsity athlete.” The line is copped from a Sopranos scene over a family pasta feast.

It could have been a nod to the Italian dinner included in the $15 ticket price for the show.

The audience will decide whether Reynolds or DiTolla does the best Al Pacino impersonation. But gimmicks aside, the comedy show is packed with varsity comedians. Bill-topper Ali Musa opened last week for Bruce Jingles at The O. He’s also a finalist in the Phoenix House of Comedy’s Funniest Person With A Day Job contest and will shortly take off on a tour of his own. Energy-packed Steena Salido has co-produced several Tucson shows, including the notorious Cunts Being Cunts Talking About Cunts. Tony Kanani Bruhn has opened for Doug Stanhope at Bisbee’s new Chuckleheads Comedy Club. Dom DiTolla and Kev Lee appear regularly on comedy stages all over town. Reynolds hosts.

There are no advance reservations, so you’ll want to get there well before the 7 p.m. dinnertime.

Local Laughs at The O

We can look forward to a deep-dish slice of local talent to get us over the hump day next week. Local comedy veteran Joey Giron, AKA Joey G, hosts 25 Tucson favorites onstage June 12 starting at 8. It’s The O’s first night of all-local comedy and it’s free. The regular menu is available and there is no cover or minimum.

Heading the lineup is Kristine Levine of The World Famous Frank Show on KLPX. Some also may remember her from 10 episodes of Portlandia.

An eight-year veteran of both the Tucson and Phoenix comedy scenes, Giron has for two years run a popular open mic at The Mint Bar. That project is on hiatus for the summer.

Not that Kabir Singh

“I hope that movie flops!” says comedian Kabir Singh of the much-hyped Bollywood film that shares his name. The film’s promotion includes renaming movie theaters and sending cosplay-like movie characters to roam the streets of Mumbai. “It has absolutely destroyed me in search engines and I’m super annoyed by it,” Singh continues, laughing.

He makes it clear the movie’s publicity is no threat. Most people know him as “Kabeezy” anyway. “That came from playing basketball in high school,” Singh says. “The whole team was African-American and we all had nicknames that ended with eezy.” That court scored Kabeezy some culture-clash comedy gold.

He recently debuted on Comedy Central with the hit show Gabriel Iglesias’s Stand-Up Revolution. He won the 2015 SF International Comedy Competition by winning all five shows in the final round—a first.

Opening for him is sometimes-Tucsonan Chris Thayer, a laconic but keen observer of the ridiculous in everyday life. He’s written for Comedy Central and worked with Patton Oswalt, Maria Bamford and Pete Holmes, among others.

Now, where are the mics?

So you shouldn’t go more than a couple of days without a chance to critique comedians’ new jokes, here’s the latest in mic movements. Comedy at the Wench and Casa Marana are still going strong at 7 p.m. on Monday, but the mic at Pitney’s Pit Stop has closed. The Tuesday mic at The Mint is on hiatus for the Summer, but the monthly mic at The Music Box has moved from a Sunday to the last Tuesday. On Wednesday, the Caffe Passe mic has closed and the Corbett Brewery mic has moved up to 8 p.m. Thursday is the mother of all Tucson open mics at Laff’s comedy Caffe at 8 p.m., but a new mic has started at 6 p.m. Thursdays at Rockabilly Grill on Oracle Road.