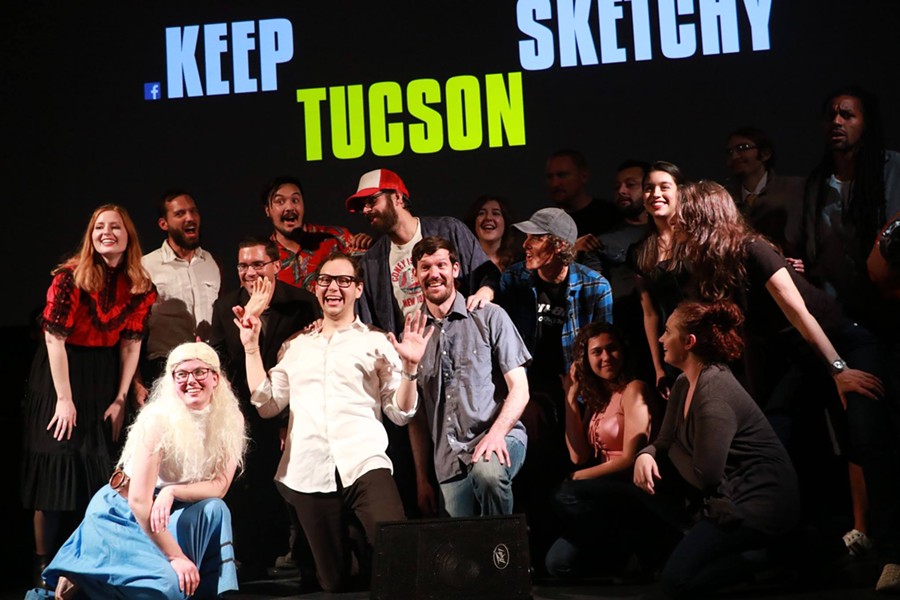 Keep Tucson Sketchy has it all

Let’s Keep Tucson Sketchy roars back at 8 p.m. Saturday, May 18, at The Screening Room. Its 42-person ensemble of actors, writers and crew includes amateurs, students, pros and several well-known local stand-up comedians. It will illuminate the venue’s movie screen with almost a dozen original video sketches. They’ll alternate with as many live scenes with projected sets, plus musical guest rapper Jaca Zuluby, interludes by DJ Bob Really and hosting riffs by comedian Matt Ziemak, co-host of Brew Ha Ha and The Switch.

Let’s Keep Tucson Sketchy debuted on March 2 to a standing room only crowd in the 99-seat venue. Rich Gary (aka Rich Aguirre) describes how the KTS concept began. “Tom (Kracower) and Joel (Foster) and I were doing a parody news show called the Scorcher Report for Creative Tucson. All the episodes are still on the Creative Tucson YouTube Channel, but (the show ended) when Creative Tucson ended their volunteer (content production) program.

“Tom still wanted to do something, and (his idea) was to do a sketch show in a parody of the Saturday Night Live format. There’s a cold open live sketch and a video intro announcing the performers just like Saturday Night Live. Matt Ziemak does 10 minutes just like the opening monolog. At some point we’ll do a Scorcher Report parody news sketch, just like Weekend Update, and so on.”

Gary is a high-energy guy who seems always to be smiling. A devoted Saturday Night Live fan from childhood, he began following live standup in high school. In college, he became a regular weekend audience member at Laffs Comedy Café.

Then, he says, “I started going to Thursday open mic just to watch. I thought, ‘These guys aren’t that good. I could do that.’ So I went home and wrote two pages of material and went back the next week and bombed. Totally. But I loved it.”

As he began going to more open mics, he found that the standup comedians he admired most also did improv. Inspired, he joined the cast of Tucson Improv Movement (TIM). Eventually he was performing on four teams, including TIM’s own nascent sketch team. At some point he started using his phone to create a vlog, The Real Rich Gary, and then began learning production as crew for the Creative Tucson show that eventually became The Scorcher Report.

Now he co-produces and performs in not only Keep Tucson Sketchy but also the popular Battle at the Roast Room, both co-produced with sidekick Colin Chomiak, and the Too Many Mics in the Screening Room a standup and panel show.

Gary credits the commitment and ambitions of actors, comedians, writers and crew members for helping him keep all these productions afloat while he pursues his own dream of a standup career.

“Everyone wants to do something! I knew that because I remember when I wanted to do everything! And I’m taking all the things I learned from improv. You need to listen you need to be flexible you’ve got to be a team player. You have to be there to make things work.”

Happy Birthday Comedy at the Wench!

That time he wrestled Andre the Giant, tho!

Professional wrestling icon Jake “The Snake” Roberts takes over Unscrewed Theatre on Wednesday, May 22, for an evening of comedy-style tales from the road and the mat. The WWE Hall of Famer and notorious prankster calls it his Dirty Details Tour; content is for ages 18 and over. Tickets are $20 for the 7 p.m. show. For $40, VIPs get one signed item, seating in the first two rows and a private meet and greet starting at 6 p.m. Visit bit.ly/JakeTheSnake5-22-19 for reservations.