Farewell to Dick Tomey, the Finest Football Coach Arizona Ever Had 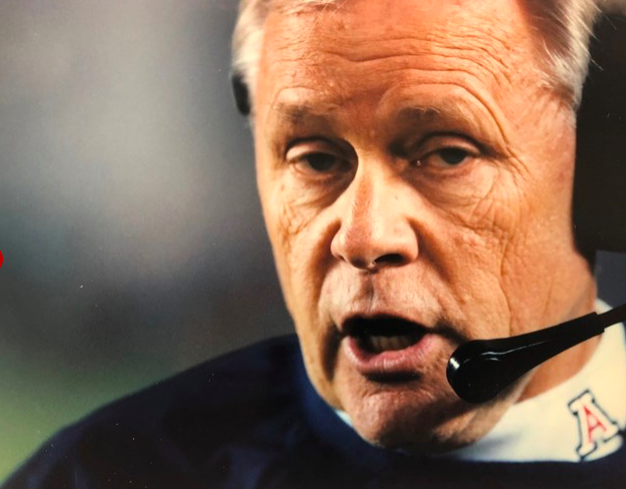 Ask anybody who ever experienced success as a football player to describe the coach who had the greatest impact on him and the response will almost always go something like, “Oh man, he was hard on me. He’d yell and scream, get in my face and cuss me out…I loved that dude.”

When you talk to guys who played for Dick Tomey, the former University of Arizona football coach who died Friday at the age of 80 from lung cancer, they generally skip over the preamble and go right to the “I loved that dude.”

This is not to say that Tomey didn’t have the fire and the fury, but he interacted with his players on a more-personal level. One of his best quotes was, “Football isn’t complicated. People are.”
Tomey went out of his way to get to know his players and to try to learn how best to motivate each one. Keith Smith, who shared the quarterbacking duties with Ortege Jenkins during Arizona’s best-ever season, remembered that Tomey somehow treated the two QBs “totally different(ly), but exactly the same.” He was known for his honestly, his compassion and his love of people.

Dick Tomey followed the usual circuitous coaching route, serving as an assistant here and a coordinator there before finally landing his first head coaching job, taking over a woefully bad Hawai’i Rainbow Warriors program. Through force of will and grit, he turned the Warriors into a winner, going 63-46-4 over a 10-year period. What’s funny is that his record on the island averages out to just a little bit better that 6-5, a season record that would follow him around.

While Tomey was building a winner in Honolulu, three time zones to the east, Larry Smith was working wonders in Tucson. Smith had taken over a program that was in the dregs of the Pac-10 AND was in the NCAA doghouse for a variety of violations committed during the previous coach’s tenure. Smith became a local hero when his underdog Cats knocked Arizona State out of a berth in the Rose Bowl in 1982. Smith then built Arizona into something of a power and twice nearly took the Cats to Pasadena on New Year’s Day. It seemed inevitable that Smith would leave for a bigger program. When he did, he did so rather inelegantly to in-conference rival USC.

Arizona then hired Dick Tomey, who was met with a collective “Who?” by Arizona fans. Smith’s last Wildcat team had gone 9-3 and finished the season ranked 11th in the country. Tomey’s first team was the absolute picture of mediocrity, finishing 4-4-3 (back in those days, college games could end in a tie). His next two teams went 7-4 and 8-4, respectively, and Cat fans began to warm to the coach with the folksy charm and preternatural calm.

There was nothing flashy about his teams. The offense scored when it could, special teams did their jobs, but the members of the defense played like their butts were on fire. Two members of the vaunted “Desert Swarm” defense—Tedy Bruschi and Rob Waldrop—are in the College Football Hall of Fame. That 1993 team started a six-year streak in which the Cats won 48 games. (In the 1990s, Tomey’s Wildcats would win more games than any other team in the Pac-10.) It culminated with the 1998 team that went 12-1, missed the Rose Bowl by the flukiest of flukes and ended the season ranked No. 4 in the country.

But when his next two teams went a combined 11-12, the fickle fans called for a change, something most have probably regretted to this day. What has followed is 18 years with a combined record of 103-119 for Arizona football under three coaches (John Mackovic, Mike Stoops and Rich Rodriguez) who won occasionally but mostly brought shame to Arizona with their sideline antics.

A lot of long-time Tucsonans remember Tomey for the way he was off the field. He played in a men’s baseball league, competing against people half his age. And he didn’t play first base or right field; he played catcher, a position that is brutal on an older guy’s knees.

One time I took my daughter to see Tucson legend Linda Ronstadt in concert with Aaron Neville. As the crowd waited for the Tucson Convention Center doors to open, I spotted Tomey and his wife, Nanci. Other coaches might have Big Timed it, huffing and puffing as to why he wasn’t being given special treatment. But Tomey was just part of the crowd. He made small talk with the people around him, always including his wife in the conversation.

I had seen him at press conferences, but I have no idea if he recognized my face. But he asked how I was doing. I introduced my daughter, Darlene. He got a big smile on his face and said, “Father-daughter concert date. That’s so nice.”

I turned to the couple standing behind us and said, “Dick Tomey approves. I’m Father of the Year!”