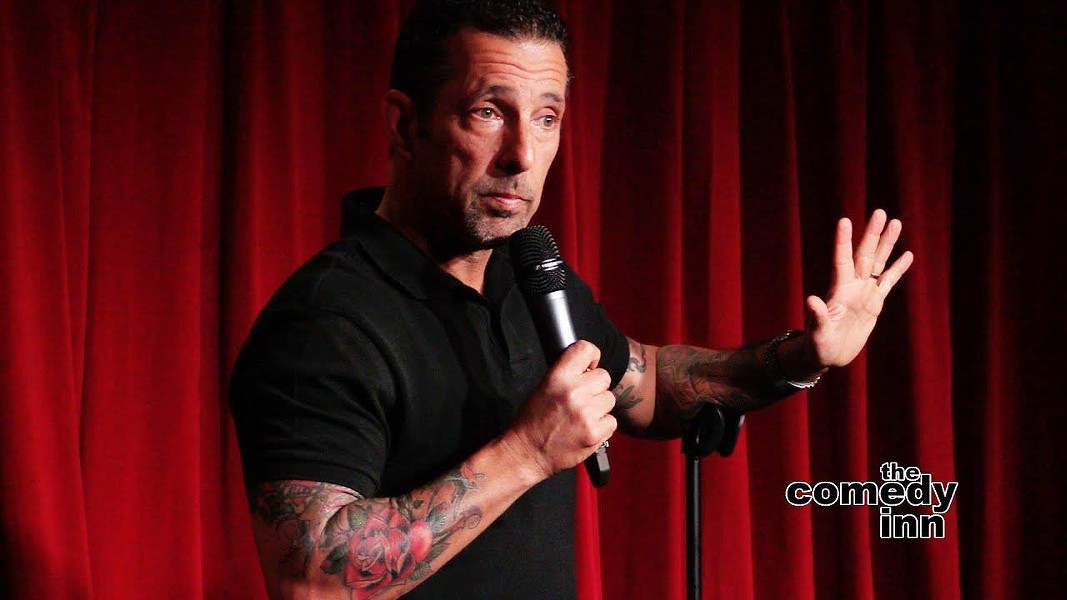 Google Rich Vos comedy and the results will weary your scrolling finger. “I’m better than Game of Thrones,” Vos told us in an interview last week. We wanted to describe his comedy to uninitiated Tucsonans. That should do it.

The event is a unicorn; you’ll want to join in its inevitable contrail of conversations. This is Vos’s first Tucson visit. It kicks off a new comedy series at The O. The club is so committed they’ve taken out a wall. And if it’s not a first, it’s certainly rare to find 35-year comedy veteran Vos in such an intimate venue at such a low ticket price. Spiking the magic, Tucson favorite Kristine Levine of The Frank Show opens.

Vos leads a deep, wide and busy comedy life, breaking only for golf. He co-hosts a wildly popular podcast with his comedian wife Bonnie McFarlane and no guests. The pair have logged 350 episodes of My Wife Hates Me, which PASTE magazine named one of the best of 2017.

Chris Rock tapped him to help write two Academy Awards shows, and he writes regularly for Comedy Central Roasts. He has four albums on i-Tunes; four standup specials on Comedy Central; spots on Jimmy Kimmel, HBO, Showtime, Starz and Sirius XM. He’s also featured in the Netflix movie Women Aren’t Funny, which he co-produced with McFarlane. And he was the first Caucasian on HBO’s Def Comedy Jam.

In conversation, Vos is a font of swaggering wisdom about his craft. For example, asked whether he was always funny, he declines to answer. “It takes years,” he says. “You’ve got people who think if they get laughs for a comment, they’re a comic. People are out there blogging crap and it’s almost insulting to what (comics) do.

“It’s just my opinion, too. Relative to what you think is good, you know who’s gonna be good, or who’s been around forever, or who isn’t original. If you’ve never seen me, you’ll see a good job. I know what I’m doing. Good comedy evolves with the times.”

Vos thrives on the differences among audiences. “Every time you’re on stage, it’s a different connection.” He compares it to golf. “You never hit the same shot twice. I’ve been doing this so long, I work in the moment. I can change to another topic if I have to. All the club experience I have, I don’t faze easily.”

In sum, we will see a unicorn show, created just for us, in the moment, because, it’s taken years, but he’s got the chops.

Formerly Gus & Andy’s Steakhouse, The O has been mostly vacant the last eight years. Mike Pavon, co-owner of The O and nearby Curves Cabaret, says the owners plan to re-brand The O as a jazz and comedy club. Pavon recruited Vos himself on a recent trip to Vegas because he wanted to kick off the O’s comedy nights with a marquee comedian.

The notion of a jazz and comedy club came about with the success of jazz shows by The Kristin Korb Jazz Trio and the local Pete Swan Jazz Trio. Swan is helping book upcoming jazz shows. Tucsoncomedy.com’s Chad Lehrman, brother of Tucson Foodie Adam, will help book comedians.

Nate Bargatze has a good problem.

On the heels of his Netflix comedy special, A Good Problem to Have, Nate Bargatze brings it to the Diamond Center at Desert Diamond Casino at 8 p.m., Saturday, May 4. Tickets are $20 via startickets.com.

Bargatze promotes himself as a “clean comic,” frequently guesting with Jimmy Fallon and Conan O’Brien, yet he toured arenas with Chris Rock in 2017. In 2011, he was featured in the Comedy Central Presents series. He’s been listed as a top comedian by Esquire and The Rolling Stone; he’s been in SXSW and Bonnaroo, and 20th Century Fox recently contracted him to a TV show.