On their latest Cheers—an album that winks at mid-century folk and ‘70s glam with tinges of R&B and hip-hop—the three frontwomen of the band leaned into their differences and gave each other unprecedented freedom in the studio. “It was a scary thing for us,” said Mackenzie Howe, “because when you have three writers, you often have to tame your differences and come to some sort of agreement. It was the first time we said, ‘Screw that, why don’t we just record the songs the way they should be done?’” With harmonies that feel like bright light suffusing a dim room, The Wild Reeds perform at 191 Toole. With support from Valley Queen. Details here.

In the mood for a three-way? Gotcha. Rock 102.1 KFMA presents P.O.D., Buckcherry and Adelitas Way. “It’s heaven and hell” at the Pima County Fair. Details here.

Sister Solace is a unique harmony-based vocal group. They will perform an evening of folk revival at the Scottish Rite Cathedral. Details here.

Native Voices features three award-winning Native American artists performing a scared evening of story and song in the round: Gabriel Ayala, Darryl Tonemah and Randy Kemp. At The Sea of Glass–Center For The Arts. Details here.

Conveying a modern sense of urgency through traditional music, perfect for troubled times. Just Najima and Brokedown Palace are at the Sky Bar. Details here.

Project 54: A Time Traveling Disco Experience transports revelers to when a disco ball was more than a light fixture. DJs spin at Solar Culture. Details here.

Inspired by the music pouring out from the gin mills across the Trinity River while still in junior high, he first took pen to paper. Later, it was the hard knocks and broken bones earned on the rodeo circuit that prodded this singer-songwriter to record Black and White Label (2006), his first self-release. Country star Cody Johnson is in a “Honky Tonk Mood.” At Desert Diamond Center. Details here.

Australian electronic musician/producer What So Not pushes the boundaries of bass. At Gentle Ben’s. Backed by beatmaker Tails. Details here. Details here.

NYC by way of Tucson, indie folk singer-songwriter Naomi Vernon is back in the desert to perform in the tasting room at Sand-Reckoner. Details here.

Billed as “An evening of acoustic music, fiddles, freaks and fervor”: The Subnormal Trio hold fascination at The Dusty Monk Pub. Details here.

All-ages pandemonium is sure to ensue at Spark Project Collective when Whiskey Drunk, Robber’s Roost and Crow Cavalier crank up the amps. Details here. 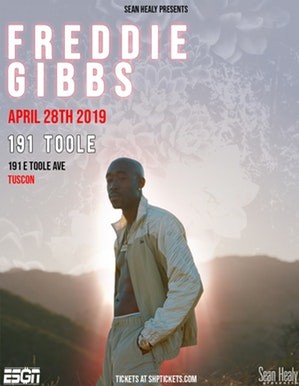 After selling 40 million albums worldwide as frontman for Poison—and all the excesses that come with that—Bret Michaels has taken to the road solo to prove that he remains “Unbroken.” At Encore (formerly Club XS). Flanked by Drop D and Push. Details here.

His credo: You Only Live 2wice. Despite narrowly dodging a gunman’s bullets in 2014 and despite being arrested in Toulouse, France, then extradited to Austria in 2016 to face allegations of sexual assault, rapper Freddie Gibbs rebounds with his latest, Bandana (RCA Records, 2019). At 191 Toole. Details here.

“Born in a small town,” strewn with “Little pink houses for you and me…” John Mellencamp presents his populist brand of rock at the Tucson Music Hall. Details here.

This tempestuous chanteuse made her mark as co-lead vocalist with Pink Martini. Now, fronting a gutsy new band, Le Bonheur, Storm Large tears out pages from the American songbook and writes new anthems as soul-stirring rock goddess. At the Fox Theatre. Details here.

Love. Is it only a capricious exercise in futility? Cole Swindell pleads his case that it always results with a “Break Up In The End.” At the AVA Amphitheater. Details here.