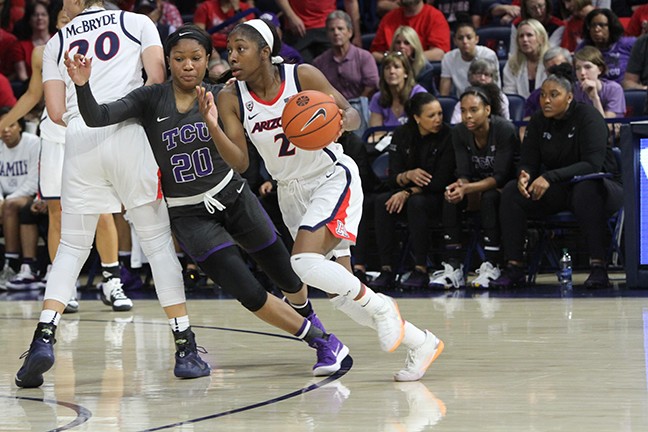 A record crowd threw its collective hands in exultation as the clock hit zero at the McKale Center Wednesday night.

A women’s basketball program record 10,135 attendees packed the longtime home of Arizona’s basketball teams, and were treated to a 40-minute spectacle between the Wildcats and Texas Christian University Horned Frogs in the Women’s National Invitational Tournament semifinals.

The two sides traded blows, both literal and figurative, through the night before the Wildcats gave the ravenous home crowd a final reason to cheer: a 59-53 victory.

Third-year coach Adia Barnes, who starred on the 1996 squad at Arizona that won the school’s previous WNIT championship, said nights like Wednesday make her decision to return to Tucson worthwhile.

“I think there's a special place for Arizona in my heart because I chose it as a player and this is where I grew up,” Barnes said. “This is where I learned my most valuable life lessons. This is where I came in a 17-year-old who was a year younger than everybody—an immature little bratty freshmen—to a leader when I left. So, all those things, you know I hold that to my heart.”

Barnes’ squad had a 40-minute dogfight with the Horned Frogs, with three lead changes and stymying defense on both sides.

The Wildcats were able to hang on for their fifth-consecutive win in the single-elimination tournament, despite being out-rebounded, 50-33.

Barnes said her team’s ability to thwart TCU’s high-paced offense was their saving grace, holding the Horned Frogs to 26.9 percent from the field.


“If you had told me we were going get crushed on the boards, 50 to 33 and win the game, I wouldn’t have believed you, but those big defensive stops you get pumped up when the crowd goes crazy,” Barnes said. “Or you hit a three and the crowd goes crazy. It makes a difference. It's a huge home-court advantage.”

Barnes could hardly contain her excitement postgame, saying the nightlong energy the crowd provided was the best she’s seen in all her years in Tucson.

She’s confident that the team’s WNIT run, which concludes with Saturday’s championship round, which will be held at McKale at noon on Saturday, has put women’s basketball on the map in Southern Arizona.

“I think it's a crowd that's just like loving it and excited and into it,” she said. “It’s not an old, quiet crowd, it's like old people jumping around, little kids, too. I love it…We're here. We're going to stay.”

Barnes commended redshirt sophomore point guard Aari McDonald, who scored 19 points and pulled down 9 rebounds, for her energy and drive.

“She just finds a way, she's got heart, she's got grit, she's got that passion,” Barnes said. “All those things that we want in a player, she has. She's someone I would want to go to war with, anytime, anyplace.”

McDonald, like her coach, believes the team’s recent run can help transform the women’s program, taking it to places its never been before.

Both she and teammate Dominique McBryde vouched for Barnes’ impact on the program, setting lofty goals for the near-distant future.

“It's amazing that all of our hard work is paying off,” McDonald said. “I think that it just says a lot, and great lengths for the program, see how we're growing, and the sky's the limit for us, and this is just the stepping stone for what's to come.”

McBryde, who scored 13 points in Wednesday’s victory, said the team definitely benefitted from the energy of the crowd, especially when TCU cut their lead to three several times down the stretch.