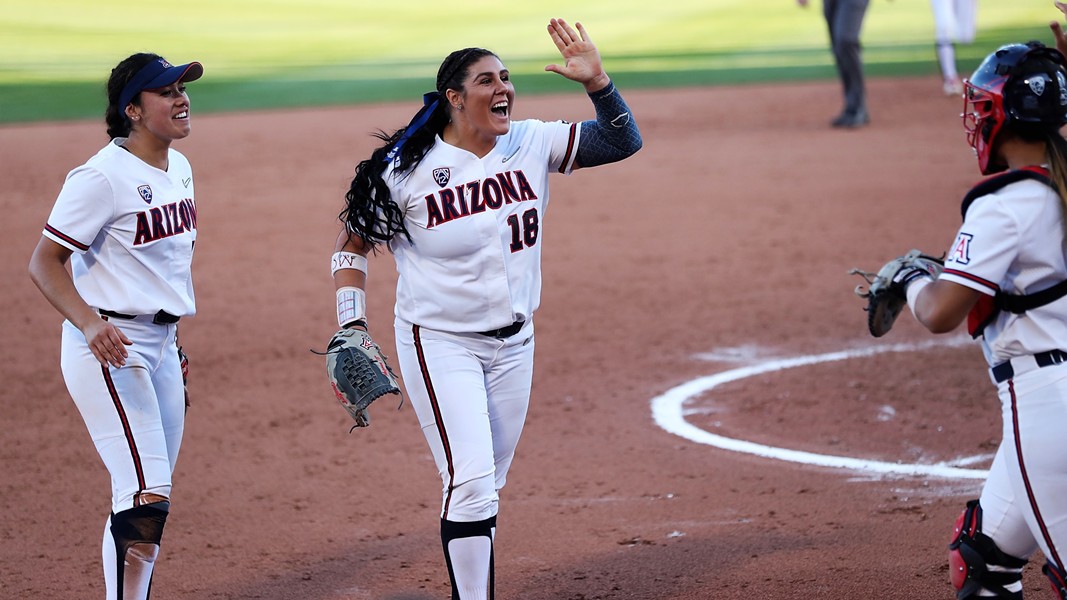 The University of Arizona’s softball team is on a roll, having won nine games in a row, all against Pac-12 foes.

The Wildcats (27-7, 9-0) latest victim was the Arizona State Sun Devils, who were swept by a combined score of 18-0 in a three-game series in Tucson.

The three-game performance was enough to give the Wildcats’ its third consecutive sweep to open conference play.

There’s also the extra motivation of Candrea being an ASU alumnus, which adds a bit of fuel to an already-heated rivalry.

“It's always marked on the calendar, with my history with Arizona State,” Candrea said. “Right now, we just want to keep playing well and it doesn't really matter who the opponent is. But yeah, anytime they come down here it's nice.”

In Friday’s opener, Malia Martinez along with Dejah Mulipola and Tamara Statman hit homers, allowing the Wildcats to finish off a run-rule victory.

The next night, it was Hannah Martinez and Alyssa Palomino who went deep, with Martinez hitting a three-run home run, while Palomino drove in two with her long ball.

Sunday’s finale was a pitcher’s duel, with the Wildcats prevailing, 2-0, thanks to an RBI single and solo home run by infielder Rylee Pierce.

Perhaps the most impressive part of the weekend for Candrea was the performance of pitchers Taylor McQuillin and Alyssa Denham, who threw 17 innings of shutout ball against one of the nation’s highest-scoring offenses.

Candrea said that McQuillin, who struck out 15 Sun Devils in 12 innings of work, is putting together the best stretch of her four-year career in Tucson.

“A big part of this game is going through the tough times and learning how to pitch at this level,” Candrea said. “And I think right now she's got more than one pitch working. She's working both sides of the plate, which is something that she needed to do. She looks good.”

McQuillin, who’s posted an 11-5 record and a 1.45 earned run average in the pitcher’s circle this season, said stymying the Sun Devils was one of her finest accomplishments.

“I think it's really cool. Obviously, this is one of the biggest series that we have all year long. It's one of the biggest rivalries in college softball,” McQuillin said. “So, it's pretty cool to go out and put on a show like our team did as a whole offense.”

McQuillin acknowledged the extra pressure that rests on your shoulders as a starting pitcher when you square off against ASU.

The Mission Viejo, California native knows how much is up for grabs when the two Arizona powerhouse programs meet, with bragging rights and pride on the line.

“The past three years that I've been here, we've always had good series against ASU just because of the competition on the field and the need to win,” McQuillin said. “It's not just for us, but it's for our fans. It's for the entire university. It's for the whole Tucson community.”

“For me, these are always the best games to play in, just coming out knowing that the competition is going to be hot, and everybody's going to have a high adrenaline rush, big energy, lots of fight,” she said. “And the fans, this is probably the greatest weekend for them, too, so knowing that they're going to support you, especially since we're at home for that series.”