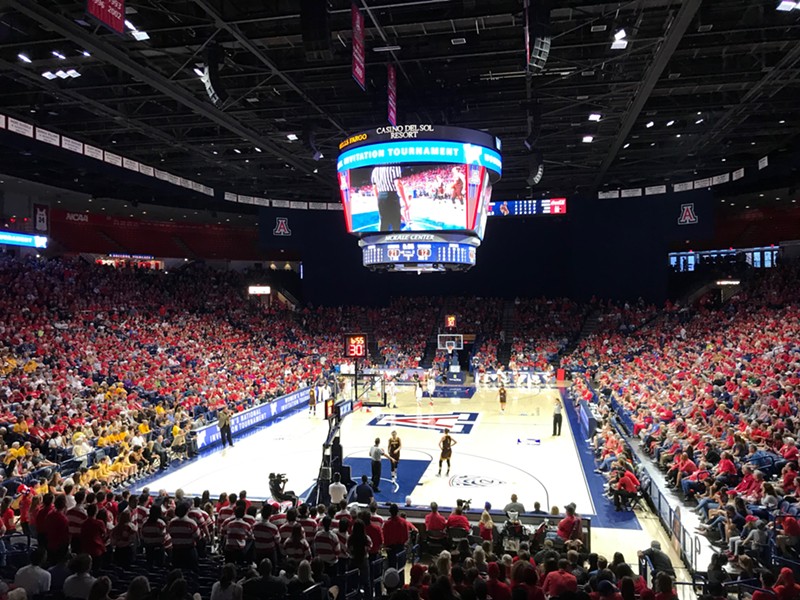 A crescendo reached its fever pitch as the final seconds drained from the clock at McKale Center on Sunday afternoon.

The joyous celebration of an announced crowd of 7,717 was the net result of a 40-minute shellacking by the Arizona Wildcats.

The Wildcats (22-13, 7-11) pummeled the visiting Wyoming Cowgirls in the Women’s National Invitational Tournament’s Round of 8, thanks to a stifling defense that thwarted the Cowgirls for much of the day.

Third-year coach Adia Barnes was reflective in her postgame comments, calling her team’s 67-45 victory a turning point for the fledgling program.

“We've learned how to win, we're hungry, we look like we have a ‘we're not going to lose’ mentality and that's the feeling I have from them,” Barnes said. “We're playing some good basketball.”

The Wildcats’ week was one to remember, beating Idaho and Wyoming in succession by a combined score of 135-105.

Their postseason run continues this Wednesday, when they’ll host Texas Christian University of the Big-12 at 6:30 p.m. in the WNIT semifinals.


The Wildcats advanced to the semifinals by bludgeoning the Cowgirls’ high-flying offense, holding them to 31% shooting from the floor.

The tone of the day was set virtually from the opening tip, as Arizona jumped out to an 11-0 lead, before taking a 26-15 advantage into the half.

Barnes said her team’s ability to run Wyoming off the three-point line speaks to their newfound confidence on the defensive side of the ball.

“I mean, [Wyoming] is a good team. They're coached really well, they're a very smart team. They're the best team we've played so far in the postseason, but we didn't make them look like that tonight,” Barnes said. “They punched us in the face a couple times. And their style is drastically different than ours, so I'm proud of the way that we adjusted to that because it's hard to play against their style. So, I'm proud of the way we played.”

Redshirt sophomore guard Aari McDonald, who led all scorers with 25 points in the quarterfinal clash, said the Wildcats knew how to exploit Wyoming’s defense.

They discovered the Cowgirls’ fatal flaw on defense early on, pressing the team to their limit off the opening tip.

“Wyoming is a great team, and they have great players, but we knew that one of their weaknesses was defense was guarding us one-on-one, so we took advantage of that from the get-go,” McDonald said.

Barnes said her team’s fast start on Sunday was helped by the size of the crowd, which kept her team amped up throughout the game.

The former Arizona point guard called Sunday’s audience the best she’s seen at McKale, drawing the most fans to McKale for a women’s game since the 2016 season.

“It felt how a men's basketball game feels here. And I thought it would take a long time to get there and I'm so proud and so grateful,” Barnes said. “I love this city. I love these fans. And I love the fact that they're coming out to support us.”

Barnes believes her team’s postseason success can be the start of a new era for the game in Tucson, with four of the team’s starters returning next season.

“I don't feel like we're exactly where we need to be, but we are moving in the right direction,” she said. “And this can cause an avalanche. So, this can be the start of something really special.”

The avalanche that Barnes references is the recruiting impact that a deep postseason run can have on a program, while also giving younger players greater on-court experience.

Senior forward Tee Tee Starks, who scored nine points on Sunday, succinctly summed up the impact of this year’s WNIT success, pointing out how much buzz there is around town about the team’s success.

“I think it's exciting just to see the whole city back us up in these types of games,” Starks said. “Like I said, everybody's not playing right now, so just to have the fans show us support and come to our game I think is really cool.”

She issued a challenge to Tucson to get more than 8,000 people into McKale for their upcoming clash with the Horned Frogs.

It’s a bold proclamation, but one that Barnes believes will be met with open arms in Tucson, given how many fans they’ve drawn in four tournament games.

She’s confident that Wednesday’s game with TCU will be one for the record books, with her players serving as the main beneficiaries, just as they were on Sunday.

“It's a huge home court advantage in the postseason, I mean all these things are really important and it matters,” Barnes said. “It is a big difference playing in front of 2,000 people and playing in front of 8,000. When the crowd yells, it is hard for other teams to come here and that's just awesome.”

Tickets for Wednesday’s WNIT semifinal game against TCU can be purchased at arizonawildcats.com, or by phone, at (520)-621-CATS.