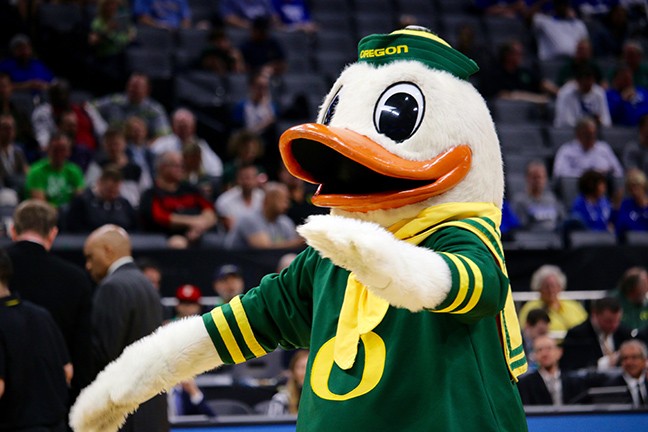 Welcome to the second week of March Madness, with the Sweet 16 round of the men's tournament scheduled to kick off tomorrow.

The opening weekend of the Big Dance saw a lot of chalk, with very few underdogs coming out on top during the week.

That doesn't mean Tucsonans are devoid of teams to root for, with fellow Pac-12 stalwart Oregon making the round of 16, thanks to beating Wisconsin and California-Irvine.

Dana Altman's squad is far from the only team worth rooting for, with several teams sporting storylines that'll keep you hooked in the field.

Without further ado, here's a handy-dandy list of teams you can feel good about rooting for in the Sweet 16.

The Ducks are the lone double-digit seed in the Sweet 16, thanks to their 10-game win streak that includes a pair of double-digit wins in the first two rounds. Altman's squad embarrassed fifth-seed Wisconsin in the opening round, hitting 54.9 percent of their shots from the field in a 72-54 victory over the Badgers. The Ducks followed that up with a 19-point win over UC-Irvine in the second round, with the Ducks putting on a three-point barrage that was remarkable to watch. Oregon drilled 13 of their 25 shots from three against the Anteaters, with freshman Louis King hitting a team-best four three-pointers on seven attempts. King's performance came into the limelight on Sunday night, when Irvine coach Russell Turner admitted to calling King 'Queen' throughout the game, in a half-assed attempt to rattle the freshman. The tone-deaf attempt at intimidation failed spectacularly, with Turner's squad getting pounded like a two-dollar steak at a truck stop against the Ducks. Oregon now must face top-seed Virginia in Louisville on Thursday, with the winner advancing to play either Purdue or Tennessee in the Elite Eight. Expect the Ducks to be a tough out for Tony Bennett's squad, giving the Pac-12 its best shot at reaching the round of 8 since the Ducks reached the Final Four in 2017.

Kelvin Sampson's Cougars team continues to defy the odds, beating Georgia State and Ohio State to advance to their first Sweet 16 since 1984. The Cougars face juggernaut Kentucky in the third round, facing long odds at reaching their first Elite 8 since ... well, 1984. The Cougars have one of the nation's fastest offenses, scoring 76.3 points per game this season. Their contest with Kentucky should be a fun one, with the Wildcats averaging 76.4 PPG this year. Houston has a pair of guards, in Corey Davis Jr. and Armoni Brooks, that are a hell of a lot of fun to watch, combining to score 30.3 points per game this year. Watching the pair try to attack the Wildcats' size and speed will be entertaining, with Sampson looking to get the Cougars to the promised land. What's also worth watching is how this team handles the rumor mill surrounding Sampson's future, with the former Indiana and Oklahoma coach rumored to be the top candidate for the University of Arkansas head coaching vacancy. The Cougars are the closest thing to a true underdog in the Sweet 16, so they should be your go-to to cheer for, with no vested interest in anyone else in this darn thing.

Mark Few's team will look to avenge their loss to Leonard Hamilton's squad in last year's Sweet 16 on Thursday. The Bulldogs are one of the best teams in the nation top-to-bottom, hammering Fairleigh Dickinson and Baylor by a combined margin of 50 points in the first two rounds of the tournament. The Bulldogs feature a two-headed monster on offense, with forward Rui Hachimura leading the team in scoring this season (19.7), and former San Jose State forward Brandon Clarke coming into form against the Bears on Saturday, scoring 36 points, which is a tournament record for the program. Enjoy the display of raw athleticism and defensive prowess that Few's team will put forth on Thursday against a Seminoles' starting five that features a couple of huge humans. The Bulldogs have had enough success over the last two decades to finally shed their underdog persona for good, but still deserve your attention.

Let's face it, most of us will root for whichever program has the daunting task of knocking off Coach K and the Blue Devils. The Hokies get that dubious distinction in the Sweet 16, thanks to handling St. Louis and Liberty in the first two rounds of the tournament. The Hokies play a brand of defense-first, grind-it-out basketball that's similar in style to their in-state rival, Virginia, but do it with a type of pizzazz that's entertaining as hell to watch. The return of forward Kerry Blackshear Jr. from a foot injury is huge for Buzz Williams' squad, with the junior averaging 14.9 points and 7.3 rebounds per game this year. Watching Blackshear try to shut down Duke's fab freshman, Zion Williamson, will be fascinating, with the Hokies hopes resting on the outsized shoulders of the Orlando native. I'm also pulling for the Hokies, because Buzz Williams is one of the best dancers in the nation amongst coaches, which is a low bar, but fun as hell all the same.

The Bayou Bengals of LSU have punched their way off the ropes after losing coach Will Wade to suspension in the SEC Tournament. Wade, who was suspended indefinitely after allegedly getting caught on tape discussing a 'Strong-ass offer,' amongst other things with disgraced wannabe sports agent Christian Dawkins, has been the talk of the tournament, even though he's nowhere to be found. The Tigers have fought valiantly in his absence, with interim coach Tony Benford guiding LSU to a place they haven't been since 2006 (the Sweet 16). The Tigers have a scintillating offense, led by sophomore guard Tremont Waters. Waters, who leads the team in scoring (15.0 PPG), and teammates Naz Reid (13.7), Skylar Mays (13.6) and Javante Smart (who Wade was allegedly making said 'strong-ass offer' to on tape) are all scoring in double figures this season. Their attack will be put to the test by a Spartans defense that's holding opponents to 57.5 points per game this year. Expect this one to be an absolute dogfight, with both sides putting forth a slew of highlight-worthy plays on the hardwood in the nation's capital on Friday night.