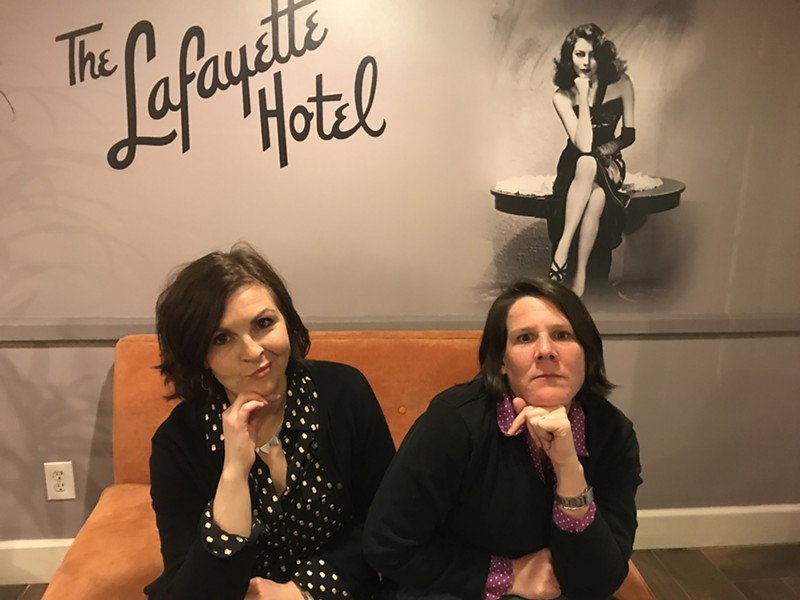 The comedy world is chock-a-block with women’s issues. All of them arise from its lopsided gender ratio. Tucsonans help mitigate things by supporting a sprinkling of all-women shows throughout the year. The Cactus Flower Comedy Festival is a relative monsoon.

Women will populate 100 percent of the comedy for nine shows in the CFCF, hosted by the Tucson Improv Movement. Now in its third year, the event runs from Thursday, March 28, through Saturday, March 30, at the TIM Comedy Theater. Admission is $5 per show except the Saturday finale, the Best Show Period, which is $10. Since the theater only seats 45, reservations are recommended. Show details and reservations are at tucsonimprov.com/cfcf. The fest is curated for fun throughout. Following are a few highlights.

Tucson’s perennially popular FST (Female Storytellers) kicks things off at 7:30 pm Thursday with a “best of” show featuring fan favorites from their monthly series in 2018. Featured in the 9 p.m. show are the female members of the long-running improv team, Not Burnt Out Just Unscrewed. NBOJU is the origin story of the veteran improv company behind Unscrewed Theatre.

Friday’s 6 p.m. show spotlights Unscrewed’s unique From the Top musical improv team. Based on one audience suggestion, they literally create a musical comedy from scratch. The 7:30 and 10:30 pm time slots Friday are devoted to women’s stand-up comedy featuring a baker’s dozen of popular locals and two Phoenicians with national reputations.

At the 7:30 show, Comedienne August O’neal brings a rib-shaking mix of glamour and “anti-feminist-pro-woman” (her motto) attitude. The 10:30 pm. Show features one of Tucson comedy’s favorite Phoenicians, Leslie Barton, in a pro-am mix. The show includes some top students from TIM’s standup comedy course taught by Mo Urban. Urban created the notoriously funny C*nts Being C*nts Talking About C*nts show.

The Best Show Period, the grand finale of the fest, features the leading ladies of Arizona improv in a lineup with Los Angeles improv stars, The Pump. Styling themselves as “8 Boobs, One Heart,” the quartet were a hit in TIM’s Tucson Comedy Arts Festival last November. In 2017, they earned the Del Close award for Best Non-Harold Team. Close was considered the originator of modern improv.

The Best Show Period is at 9 p.m. Saturday, following TIM’s popular weekly short-form show, Throwdown. The show is unusually competitive for improv, with lots of audience participation. In the end, the audience votes for the winning team.

TIM’s CFCF team lead Catherine Bartlett says she takes the most pride in the high praise performers give her crew for their professionalism. Still, nothing beats success like success. “Crazy!” she says. “Multiple sold out shows every night of the fest every year. It shows women have talent and the community is here for it.”