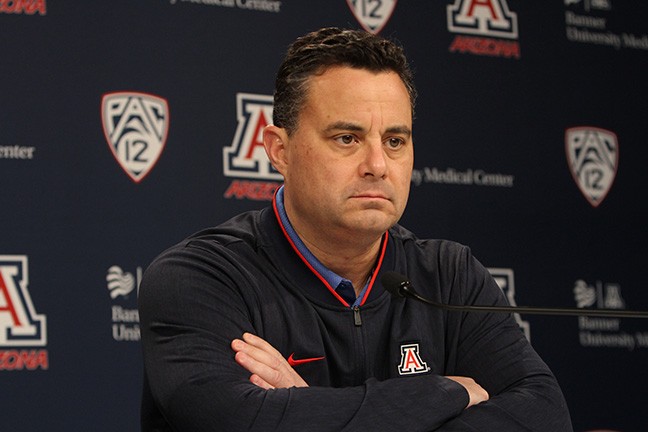 The University of Arizona mens basketball team's lost season came to an unspectacular end in Las Vegas on Wednesday.

The Wildcats will certainly miss the NCAA Tournament for the first time since 2011-12, Miller's third in Tucson.

That team, which lost to Bucknell University in the NIT, featured future NBA fixture Solomon Hill, along with a fresh-faced Nick Johnson manning the point.

Miller's fate improved drastically from there, of course, reaching four Sweet 16s and two Elite Eights between 2012 and 2017.

The course of MIller's tenure in Tucson took an abrupt turn in the early morning hours of Sept. 7, 2017, as you probably recall.

That morning, longtime MIller confidante, Emanuel 'Book' Richardson was rung up as part of the FBI's investigation into college basketball.

That investigation, which resulted in Richardson pleading guilty to one count of conspiracy to commit bribery, is still ongoing.

Its impact on the Arizona program continues, as well, with Miller being hit with a subpoena to testify in court in late April.

Miller's connection to the FBI investigation swirled in February of 2018, with ESPN's infamous story on Miller being caught on federal wiretaps offering a $100,000 payment to former center (and NBA number one pick) Deandre Ayton.

Miller has steadfastly denied any wrongdoing during his public comments since the story broke 13 months ago.

What April's testimony will unveil, however, is a matter that is sure to befuddle those tasked with deciding the coach's future in Tucson.

What is clear is that the NCAA will be tuned in to what Miller and current LSU coach Will Wade, the other coach subpoenaed, say on the witness stand.

The NCAA's seemingly-endless set of bylaws lay out how a head coach is responsible for any misconduct committed by an assistant.

Whether Richardson's conduct, and his subsequent guilty plea, will be used by the organization in the future is uncertain.  We'll know a lot more about the future of Miller's tenure in Tucson and how long he'll stay once he takes the stand.

Arizona currently has the top-ranked recruiting class in the nation, according to 247 Sports and ESPN. The addition of in-state guard Nico Mannion, who was named one of three Gatorade National Boys Player finalists on Friday, should boost the team's fortunes a year from now.

Mannion, in addition to five-star small forward Josh Green, have a shot at being the men who bring the Wildcats back to their rightful place atop the sport's lexicon.

All of that will rest on the words of the man who recruited them in a New York City courthouse next month.

The countdown to the 2019-20 basketball season has started in the Old Pueblo. What happens between now and then is anybody's guess.