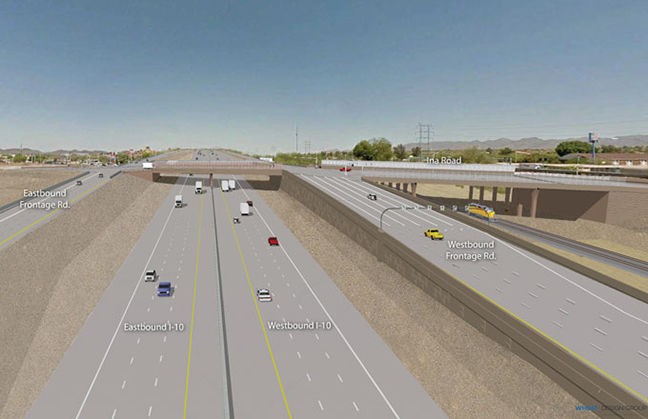 While work continues in the area, one lane of Ina Road is available in either direction, a major milestone in the interchange project. The posted speed limit is 25 mph.

According to a press release issued by the Arizona Department of Transportation, ramps connecting Ina Road with I-10 are expected to open “in the next few weeks.” Widening Ina Road from I-10 west to the Santa Cruz River and connecting with a new bridge over the river, the final parts of the project, are expected to finish up later this spring.

With the new, four-lane overpass in place, drivers will no longer need to wait for trains at Ina Road.

The $128 million project also includes replacing a single, two-lane Ina Road bridge over the Santa Cruz River with two bridges, doubling the road’s capacity west of I-10, and creating a bicycle path that connects with The Loop.

ADOT is overseeing the project, which is funded by the Federal Highway Administration, the Pima Association of Governments and the Regional Transportation Authority. Marana chipped in $7.9 million toward the cost of the new Santa Cruz River bridges.