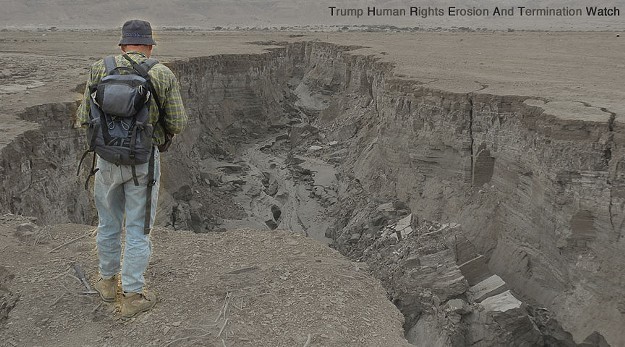 It's been awhile since I've written one of these THREAT (Trump Human Rights Erosion And Termination) Watch posts, which I began writing a week after Trump's election.

It's definitely time for another one. Not because Trump has done anything unusually outrageous or frightening lately. He hasn't. He's been steadily outrageous and frightening in word and deed from day one. He continues to trod down the path he stomped out, campaign speech by campaign speech, tweet by tweet, beginning in the election season and continuing during his two years in office. Though he has done damage to the country and the office of the presidency in ways which may not be remedied in our lifetimes, he hasn't irreparably harmed the country.

The only reason Trump hasn't done more harm is because the country's basic institutions have held him in check. The courts have reversed, delayed and curtailed much of what he wanted to do. Once in awhile Congress puts a check on one of Trump's schemes, usually in the foreign policy arena. Rarely, but it happens. And the media—Bless and keep the media, our first line of defense against tyranny!—has stayed strong and independent. The more Trump calls the truth-telling media the Enemy of the People and purveyors of Fake News, the harder reporters work to tell the truth.

Trump should also be held in check by the conventions of the office which say the president is bound by court decisions, by congressional laws and oversight and, possibly most important, by a sense of what's right. A president should have a reasonable amount of honor as well as a sense of shame. When he's done something wrong, or even worse, when he's been caught at it, he should say, "I shouldn't have done that. I'd better back off, maybe even try and make amends. I learned my lesson on that one."

And therein lies the greatest threat Trump presents to the country. He is unbound by the norms of law, society and human decency. He'll lie, cheat and steal, whatever it takes. When he's caught in a lie, he lies harder, repeating the lie more often and ever more outrageously. When the courts rule against him, sometimes he ignores them and other times he works around them, violating the spirit of the court's ruling, trying to find a way to do what he wants in spite of their pesky judicial meddling.

This is nothing new. He's always been this way. But it's gotten worse lately.

Some recent cases in point:

The court ordered the Trump administration to stop regular separations of children from their families at the border. Yet, according to the federal judge monitoring the situation, 245 children have been taken away from their families since the order. To make things worse, the responsible agencies still aren't keeping track of where some of the recently removed children are located.

The Trump administration has been pushing for a citizenship question on the 2020 census. Courts have ruled against it twice. Starting in January, right after the first judge blocked the citizenship question, plans began for Homeland Security to provide detailed information about non-citizens living in the U.S. to the Census Bureau: their immigration status, "full names and addresses, birth dates and places, as well as Social Security numbers and highly sensitive alien registration numbers." It's an unprecedented move which would give the Census Bureau more information than it would be able to obtain during its normal information gathering process.

Trump's war on journalists is being waged in earnest at the border. He knows on-the-scene reporting is what raised the alarm about the way families and their children seeking asylum were being treated. So the administration disseminated a list of journalists and activists who were working at the border. These people are stopped, questioned, have their cellphones taken and are sometimes forbidden from crossing into Mexico.

None of these actions go anywhere near as far as Trump would like to go, and that's the real concern. Though Trump may be unbound by the norms of law, society and human decency, he's still bound by restrictions which can be placed on the executive by its two coequal branches of government, the legislative and the judicial. And he hates it. He just hates it. He has done what he can to neuter the legislative branch of the government by turning congressional Republicans into frightened lap dogs. He's been less successful at neutralizing the power of the judicial branch, which he complains about regularly. If he can take away the power of the judiciary to keep a lid on his authority, he can make the executive the only fully functioning branch of government, giving him the power to ram through his agenda free of checks and balances.

And then there's the fourth estate, which Trump loves to hate. Freedom of the press is the enemy of authoritarians like Trump. He desperately wants to change the libel laws so he can sue the media into submission, since his verbal assaults aren't getting the job done.

Of all the things Trump admires about Putin, Kim Jong Un and the other dictatorial strongmen of the world, it may be their control over the press he loves most. I imagine he's salivating as he watches the fate of a proposed law in Russia, which would allow the government to fine or jail anyone who insults the government or spreads what Putin considers "Fake News." Trump would kill to have a law like that for his very own.