Arts and Culture Do This! 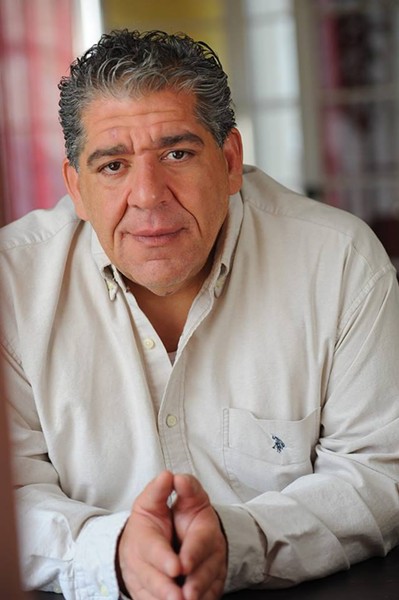 Joey “Coco” diaz may be from Cuba, but he’s the very soul of New Jersey. He looks and talks like central casting’s dream of a thug from The Sopranos. In fact he’s played to type in several movies and TV shows, including The Longest Yard, Spider-Man 2, Taxi and and the Robert DeNiro and Sylvester Stalone 2013 boxing flick Grudge Match.

With his comedy, he’s toured the country’s largest clubs for more than 20 years, in recent years building audiences through his podcast, The Church of What’s Happening Now, regular appearances on The Joe Rogan Experience and a series of straight-to-download comedy shows called The Testicle Testaments, some of which broke into Billboard’s Top 100.

The 2018 Netflix special The Degenerates seems to have given him a late-career boost. The series features Diaz among six standup comics walking on the “mature audiences only” side. Now, Diaz is being booked into the likes of the Fox Tucson Theatre, where he performs at 7 p.m. Saturday, Feb. 23.

Diaz’ longtime pal Ron Reid, a recent transplant from L.A., who now runs his multi-million-dollar comedy management and promotion business out of Northwest Tucson, was happy for his friend’s good fortune, but a little surprised. “I guess that’s the power of Netflix!”

He has lots of stories from Diaz’ salad days, but only one he dares to tell. One of the many years Reid ran the storied Seattle International Comedy Competition, a venue cancelled at the last minute and he had to move the show to St. Martin’s University, run by the Order of St. Benedict.

“They agreed to take the show,” Reid says, “but they said it has to be clean, and we want one of our brothers to be a judge. We get to the show and the brother is right in front. He’s got robes, the haircut…the full monk.

“Joey Diaz didn’t have five clean minutes, and not really any interest in doing that. So, he would swear or have inappropriate content, and every time, he would look over at the monk and apologize. Joey has a very strong New Jersey accent, and he would say it with that edge, like ‘I’m so sorry faddah.’  At one point, he said something really outrageous, then looked at the monk and said, ‘Faddah, I’m sorry but I gotta tell ya, the last time I went to confession, they told me to get a fuckin’ exorcism!”