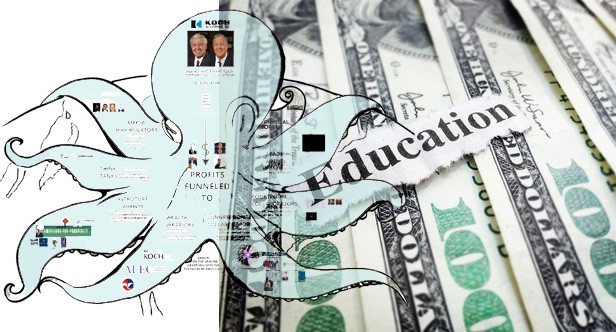 Will Arizona be among the [un]lucky five states to be part of the new Koch Network education initiative? The states have yet to be named, but I suspect Arizona is on the radar, given the Koch Network and Governor Ducey's mutual admiration society. We know KN loves Ducey's vociferous support of vouchers, and Ducey loves KN's money in equal measure.

The Koch Network announced its decision to put money into education — until recently, it has deferred to other right wing, privatization/"education reform" groups — during its latest summit at Indian Wells, California (about 5 hours down the road from here), where all it takes to get in the door is a commitment to pledge at least $100,000 to the cause.

The announcement came a day after one of the Koch folks' rare kumbaya moments, a celebration of the bipartisan support for the First Step Act, signed into law by President Trump in December to reform the criminal justice system. Friend-of-Obama Van Jones was on board, and he praised the Koch Network's support of the legislation. So was First Son-in-law Jared Kushner (whose interest in the subject was probably spurred by his father's stay in prison [put there by Chris Christie, but that's a whole 'nuther story]).

Don't make the mistake of thinking this is a signal KN is planning to make nice with progressives in the future. Lower incarceration rates, along with fewer laws restricting drug use, have long been part of the libertarian platform. On a number of social issues, libertarians' "less regulation, more freedom" agenda coincides with the progressive viewpoint.

However, the Koch Network is trying to sell its new education initiative as another attempt to join hands with people on the other side of the aisle. Some of its spokespeople went out of their way to praise teachers, who they usually lump together with evil unions and failing schools. The elevator pitch for their new initiative sounds kinda not bad, until you get into the details.

From the Koch perspective, the root causes of failing schools boil down to lousy public schools and the corrupt unions which keep them that way. The solution: more charters and even more vouchers.

New technologies and individualized learning refer to what's often called "personalized learning," a euphemism for the de-personalized learning systems where students sit in front of computers loaded with flawed educational software which is supposed to modify its teaching strategies based on students' individual needs (while sending gigabytes of data on young children back to the company's mother ship, which can be exploited for the rest of the students' lives).

Here's a way to put "personalized learning" into perspective. It's where Facebook multi-billionaire Mark Zuckerberg is putting his education foundation money.

As for investing in teachers and classrooms, you can bet that translates to boosting the budgets of charters and private schools.

The Koch agenda emphasizes "educational pluralism," which means using government money to fund all kinds of schools, including, of course, private religious schools. In other words, vouchers in all shapes and sizes.

Their notion of "educational pluralism" doesn't extend to what's being taught. One of Koch Network's stated reasons for getting into the education game is to encourage the teaching of their brand of conservative capitalism. They're certain that socialism is being crammed down the throats of unwitting students. Why else would so many young people be trending progressive?


"The younger  generation is less sympathetic and less understanding of limited government conservatism,” said Art Pope of North Carolina, a fixture of Koch meetings. “They’re more sympathetic or more willing to give not just social justice but outright socialism a chance. … It used to be you didn’t have to have a serious conversation about socialism in American politics. Now you do. So what is the appeal of that? How do you message?”'