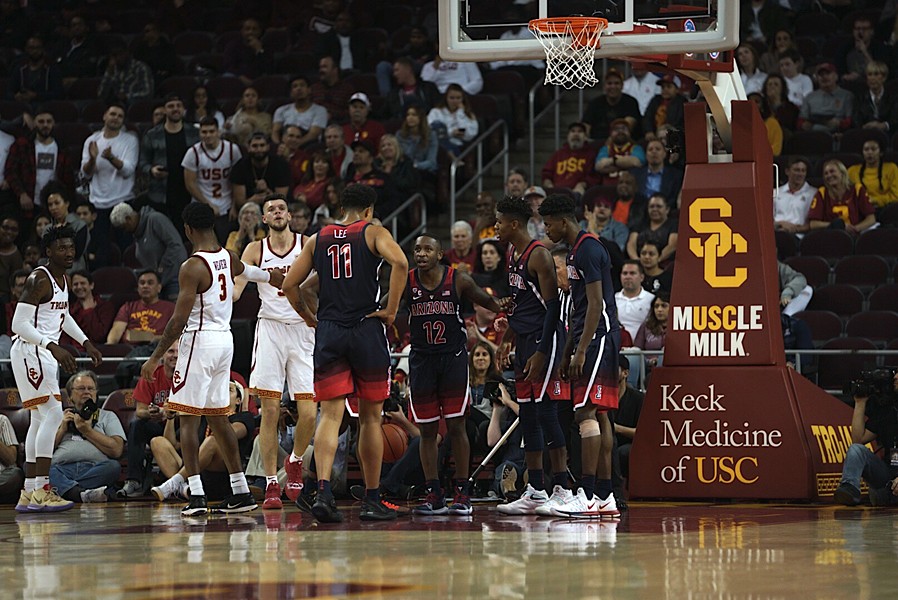 The Arizona Wildcats suffered their worst loss against the Southern California Trojans in 46 years on Thursday.

The tide of the evening was set a few minutes after tip, with the Trojans hitting four of 10 from behind the arc, while the Wildcats hit 2-of-13 (15.4 percent) from deep.

An exasperated Sean Miller picked up a technical foul in the game's first half, arguing a personal foul call.

The longtime Arizona coach could barely speak above a whisper in his post-game comments, chalking up the team's loss to a variety of factors.

The key factor that Miller and sophomore forward Ira Lee mentioned was the loss of junior forward Chase Jeter.

Jeter, who is second on the team in scoring (12.6) and first in rebounding (7.2), missed Thursday's game with a back injury he suffered during last Saturday's 82-71 win over Oregon State.

Lee, who scored 12 points for the Wildcats on Thursday, said losing Jeter was a definite blow to the team's chances.

"It was definitely tough. He's our captain. He's our only true center," Lee said. "So, it was a tough deal but I feel like we battled tonight, but we made a lot of mistakes."

Miller said his squad doesn't have the depth or size to contend with teams like USC, which was led offensively by junior forward Nick Rakocevic, who scored a team-high 27 points in the Trojans's victory.

“The team we have right now without him, we have to make shots, a lot of 3s, jump shots, and we weren’t able to do that. We had one of those miserable nights shooting. Seven turnovers was great, but we weren’t able to finish at the rim, 2-on-1s, drives.”

The Wildcats' lack of size resulted in the team being out-rebounded, 51-38 by the Trojans, resulting in a one-sided affair.

The Wildcats will look to rebound on Saturday night, when they'll journey up the PCH to face the UCLA Bruins.

Saturday's game will tip off at 7 p.m. in California, 8 p.m. Tucson time, with the Bruins coming off an 84-73 loss to ASU on Thursday night.

Miller is ready to put Thursday's trouncing in the proverbial rear-view mirror, saying he's going to move on from the loss as soon as possible, with little to gain from dissecting their defeat.

“I don’t think we can take anything” away from it, Miller said. “I mean, we got killed.”