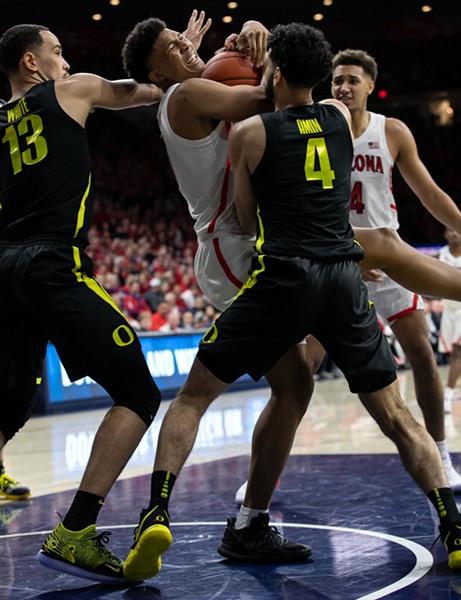 The Arizona Wildcats are headed to the City of Angels for a two-game road trip that'll see them play USC and UCLA.

Arizona enters Thursday's game after a split home stretch against the Oregon schools, losing to the University of Oregon, 59-54 last Thursday, before beating Oregon State, 82-71 on Saturday.

Perhaps the greatest question entering Thursday's clash is the health of junior forward Chase Jeter, who suffered what coach Sean Miller called back spasms after a brutal fall against Oregon State.

Jeter is listed as 'questionable' to play against the Trojans, after X-rays came back negative on the 6'10 Duke transfer.

“I would categorize Chase as he’s making progress,” Miller said at this week's press availability. “When you have a lower back injury, there’s stiffness that’s just overwhelming. It affects your movement and it strips you of your confidence to some degree. Because every time that you turn and land, or get ready to jump, you really think about it."

Jeter's health is of pivotal concern to Miller and his team, as the junior ranks second on the team in scoring (12.6), with a team-best 7.2 rebounds per game this season.

The Wildcats beat USC by 14 points in each of their two contests last season, last falling to the Trojans in 2016.

How to Watch: Fox Sports 1 is airing tonight's Arizona-USC game. The telecast will begin at 7 p.m. local time, or 6 p.m. in Los Angeles.

How to Bet: Vegas has USC as a one-point favorite. The over/under is listed at 145.

Who to Watch: Keep an eye on Bennie Boatwright of USC. Boatwright leads the Trojans in scoring (17.3 PPG). Junior Nick Rakocevic is another one to keep an eye on, with the 6'11 junior averaging 15.2 points and 9.7 rebounds per game this season.

Is Bill Walton Calling the Game?: No, sadly, 'The Most Interesting Man in College Basketball' is calling the Washington-Oregon game tonight.

My pick: I see Arizona holding off a desperate Trojans squad in a low-scoring, back-and-forth affair.