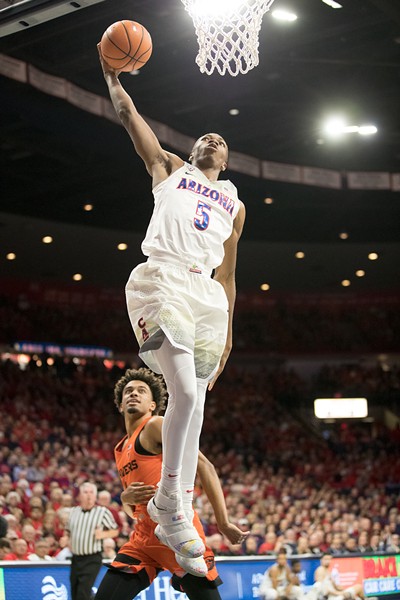 The injury-riddled Oregon Ducks flock south to Tucson tonight in a Pac-12 battle with the Arizona Wildcats.

The Ducks (10-6, 1-2) enter tonight's game without leading scorer Bol Bol and sophomore forward Kenny Wooten, with both missing the rest of the season to injury.

The team has endured a rough start to conference play, blowing a double-digit lead in the final minutes of their home game against UCLA on Thursday, Jan. 10.

The Ducks lost that game in overtime, 87-84, a game after losing by 5 to in-state rival, Oregon State, in the team's conference opener.

They responded with an 81-60 win over USC on Sunday, Jan. 13, and enter Thursday's game in search of their first road win since beating Boise State on Dec. 29.

Here's some of the pertinent information to keep in mind, ahead of tonight's contest between the Wildcats (13-4, 4-0) and the Ducks.

How to Watch: Arizona and Oregon tip off at 7 p.m. MST on ESPN.

How to Bet: Arizona is a six-point favorite, as of Thursday afternoon. The Wildcats are 9-7-1 against the spread this season.

Who to Watch: Keep an eye on junior guard Payton Pritchard, who is the Ducks' leading scorer with Bol on the shelf for the season. Pritchard is averaging 11.7 points and 4.6 assists per game.

Pick to Win: I'll go with Arizona beating the Ducks, 69-68, to improve their conference record to 5-0, with another crucial home contest awaiting the team at 5 p.m. Saturday, when Oregon State comes to town.