Three and Out: Arizona Heads to Pullman to take on Gardner Minshew and the Washington State Cougars 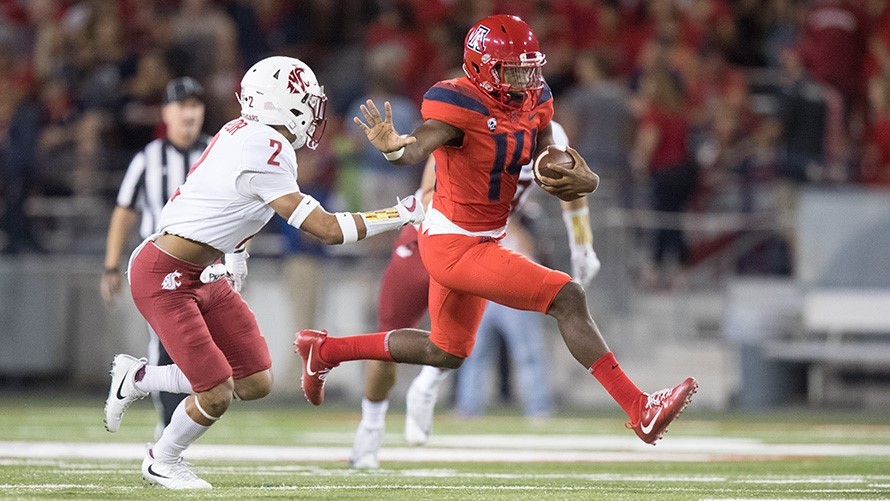 The Arizona Wildcats have a shot at throwing the college football world into complete and utter chaos this weekend.

It's a game that means a great deal to both sides, with the visiting Wildcats desperately seeking a sixth win, which would guarantee a bowl game for Kevin Sumlin's squad. The Cougars, meanwhile, are two wins away from clinching their first-ever appearance in the Pac-12 football championship game.

A win over the Wildcats, teemed with a victory over in-state rival Washington in next week's Apple Cup showdown could vault the Cougars into the College Football Playoff discussion. It's a stage that the Cougs' haven't been in very often, making the Rose Bowl four times in school history (1915, 1930, 1997 and 2002).

Mike Leach's squad has reached the pinnacle of Pac-12 excellence, thanks to its usual pass-happy offense that's spearheaded by mustache-aficionado Gardner Minshew.


Minshew, who transferred to WSU from East Carolina, leads the nation in yards per game (3,852), while ranking sixth overall in the nation, with 29 passing touchdowns.

Sumlin heaped a whole lot of praise on the senior gunslinger from Washington State, calling him one of the best offensive players in recent Pac-12 history.

“You see his maturity and his experience. He has gotten more and more confident throughout the year as he’s played," Sumlin said. "That just comes with experience and playing together with people. He’s a leader, he’s a competitor, you see that in games.”

The Wildcats, meanwhile, are coming off their lone bye week of the year, after beating Oregon and Colorado at home in consecutive weeks to get back to .500 for the season.

Much of the team's success hinges on the performance of junior quarterback Khalil Tate, who has 1,954 passing yards and 19 touchdowns this season.

Tate has been electric throwing the ball of-late, completing 36-of-55 passes for 539 yards and eight touchdowns against Oregon and Colorado combined.

The veteran quarterback will be put to the test this week, however, as Washington State is currently the third-best defense, in terms of passing yards allowed per game (198.7), in the conference.

It's the Wildcats first appearance at Martin Stadium since the team's 69-7 shellacking in 2016, the school's largest margin of defeat since losing by 75 to Michigan State in 1949.

Senior lineman Cody Creason remembers that loss, and how much it stung to watch Washington State run up the score on a cold afternoon in Pullman.

He acknowledged a bit of payback for the Wildcats, who hammered the Cougars in Tucson, 58-37 a year ago, but says a win on Saturday would be the ultimate revenge.

“Whenever you get beat like that you never really forget an experience like that. But [the win] last year definitely gives us confidence going into this week.”

How to Watch: Arizona and Washington State play at 8:30 p.m. Arizona time in Pullman. ESPN will air the game.

Who to Watch: Washington State senior quarterback Gardner Minshew has completed 69.6% of his passes for 3,852 yards with 29 touchdowns in 10 contests. Junior receiver Dezmon Patmon is the Cougars' leading receiver, with 724 yards and three touchdowns this season.

How to Bet: Vegas has Washington State as a 10.5-point favorite, as of Thursday morning. The over/under is set at 62.5 points.

Score Prediction: Washington State is the class of the Pac-12, by far. They've stumbled a bit of-late, but haven't lost any of those games. I don't see them having any issues against Arizona. Washington State 59, Arizona 21.