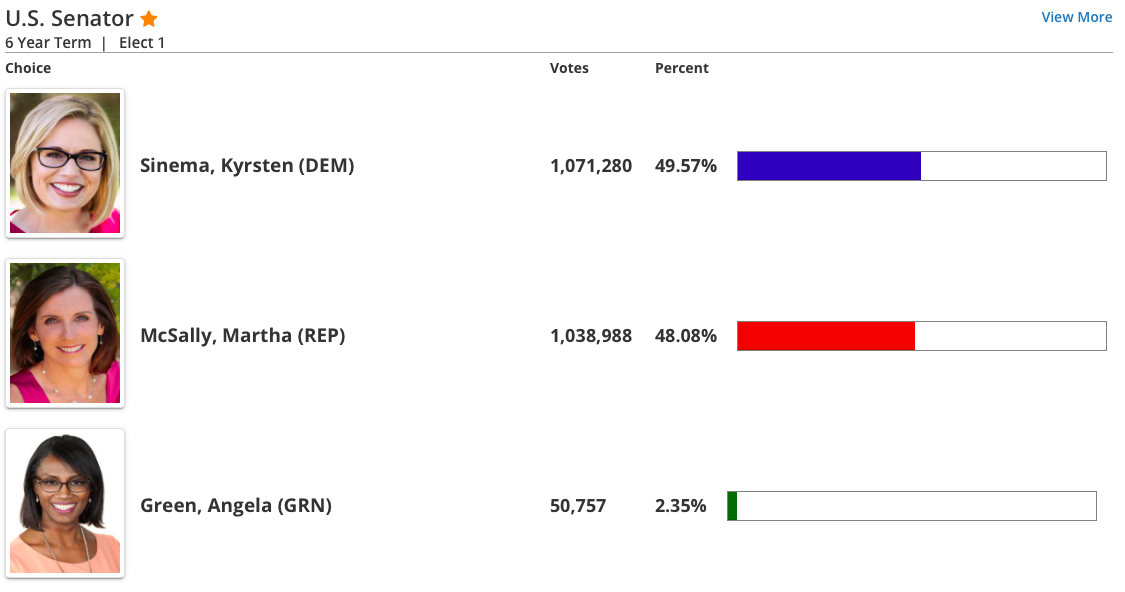 An update to our earlier post thanks to a new batch of ballots from Pinal County: Democrat Kyrsten Sinema's lead over Republican Martha McSally now stands at 32,292 votes. McSally has fallen further behind with each Maricopa County tabulation dump and only picked up 348 votes in Pinal County, which has an estimated 15K ballots left to count.

With the latest ballot count, Kyrsten’s lead is insurmountable. McSally’s campaign said today’s results would be her ‘firewall’ but as we expected, no firewall emerged. McSally has lost every batch of votes from Maricopa County and today, Kyrsten won by 6.25 percent – nearly double her overall performance in the county to date. Kyrsten has now expanded her overall lead to 32,640 or 1.52 percent, meaning McSally would have to win the remainder of Maricopa County ballots by 22 percent to take the lead in this race. This is not plausible. Kyrsten will be declared the next U.S. Senator from Arizona.

Team McSally is holding out hope:

Today our vote total grew at a greater rate than expected, and we expanded our vote margins in rural areas counting mail-in ballots dropped off on election day. The latest release provides compelling evidence that the remaining uncounted ballots are favorable to Martha. And we will continue our effort to make sure all lawful ballots are counted.

Team McSally's argument would be more persuasive if the rural counties had a significant number of ballots to count.

And Republican Rodney Glassman remains 10,000 votes behind the two leading candidates in the race for two seats on the Arizona Corporation Commission. If this trend holds, APS could be in for some real trouble, should current Corp Commissioner Bob Burns become chair of the ACC. Details to follow.

The latest results for Maricopa County in the 2018 General Election are in, and can be found here: https://t.co/yJpuLCiCXe

The next update will be tomorrow at 5 p.m. pic.twitter.com/jiv2j9IXfy

That's probably not good news for McSally, who is trailing in Maricopa County by more than 46K votes.


This post has been updated and corrected to properly characterize Team Sinema's statement.