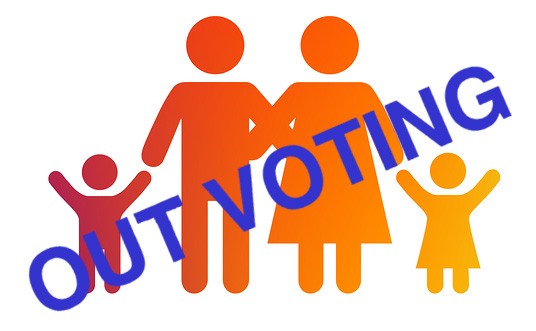 No one has a greater stake in Arizona education than parents of school-aged children. No one. Except maybe parents of children too young to attend school who will be in kindergarten in a few short years (It'll be sooner than you can imagine!). And people who are planning to have kids, whose future children will enter school within a decade. All of you are going to gain or lose based on the results of the upcoming elections.

So, my advice to parents is, VOTE! If you have a mail-in ballot sitting around beginning to gather dust, pick it up, fill it out and mail it in. No stamp required. If not, there's early voting at the polls. And there's November 6.

Vote for your children, which means, vote education — whatever that means to you. More on that later.

I figure there are about 400,000 of you parents with school-aged children registered to vote. (I'll explain how I arrived at that ballpark figure at the end of the post.) If you vote at 35 percent, which is typical for non-presidential elections, that's 140,000 ballots cast. Some of you who normally sit on the sidelines could, and should, decide this election is important enough to make the extra effort. If the number goes to 50 percent, that's 200,000. If you double your voting rate, you'll be pushing a quarter million.

Parents are an electoral force to be reckoned with. If you split along party lines as usual, not much will change. But if you vote for candidates who are long-time supporters of public education, not candidates-come-lately who, after years of bashing "failing schools" and "failing teachers," have decided it's politically expedient to say our schools deserve a little more money and support, you can be game changers.

Vote Democratic if you believe our public education should be fully funded, that Arizona should no longer occupy the nation's bottom rung in per-student funding.

Vote Republican if you don't want to "throw money" at failing schools and failing teachers because more money doesn't translate to better schools.

Vote Democratic if you think charter schools need more oversight and regulation to get rid of the bad actors and profiteers.

Vote Republican if you think the current lax charter rules and regulations are just fine, that we should let the "invisible hand of the marketplace" work its magic.

Vote Republican if you like the idea of vouchers for everyone who wants them.

Whatever you decide, parents, VOTE!

A Number-Of-Voting-Parents Note: Maybe the numbers are out there somewhere, but I didn't find them. So here's how I got to 400,000 Arizona parents of school-aged children who are registered voters.

Start with a million K-12 students. Estimate 2.5 children per family, figuring the range from big families and those with one child. That comes to 400,000 families. Estimate 1.5 parents per family. Now we're at 600,000 parents. Estimate a third of the parents either didn't make the effort to register or aren't citizens and can't vote. That leaves 400,000 parents of school-aged children who are registered voters.