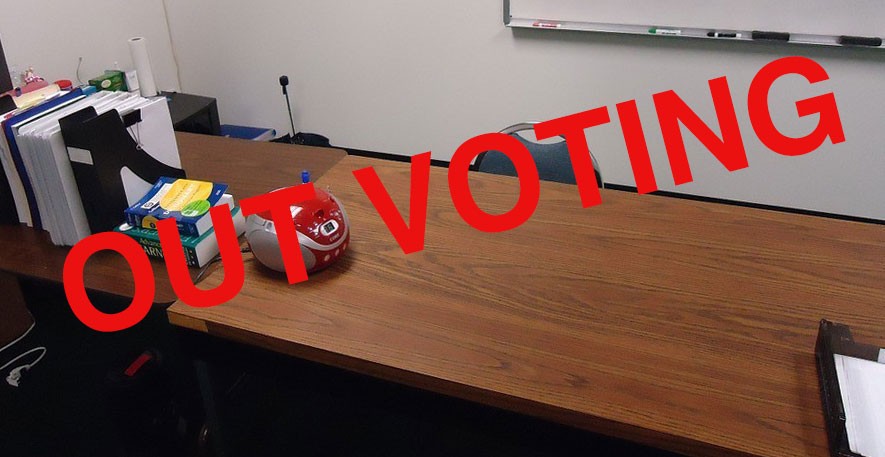 Apologies to fellow teachers. (I know, I've been out of the profession for 15 years, but once a teacher, always a teacher, even after you lose your class [badum-ching!]). I know how much teachers hate being told what to do. I always did. I keep promising I won't give teachers advice, but I keep doing it anyway. My excuse is, I spent 30-plus years in the classroom, so I'm cutting myself a little slack.

My advice to teachers is, VOTE! If you have a mail-in ballot sitting around beginning to gather dust, pick it up, fill it out and mail it in. No stamp required. If not, there's early voting at the polls. And there's November 6.

Teachers, vote for education, whatever that means to you. More on that later.

Arizona has about 50,000 K-12 teachers. Roughly 40,000 of them work in school districts, and most of the remainder work in charter schools. That's a whole lot of people whose lives revolve around governmental decisions. Include an equal number of non-teaching staff, and it adds up to nearly 100,000 potential education-based voters in statewide races, 3,000 per legislative district. That's more than enough to make the difference in close races.

For some reason I've never understood, teachers aren't reliable voters. I've heard figures as low a 35 percent show up for elections, which astounds me. Anything lower than 80 percent from a group of people who dedicate themselves to serving the public interest, who perform their civic duty every working day, seems wrong. Maybe some teachers feel like they use up their quotient of public service in the classroom, then when it comes time to vote, they think, "Screw it, it's time for the rest of you to step up while I work on tomorrow's lesson plan for your kids!"

OK, so this year, don't think about voting as another civic chore to add to your physically and emotionally draining teaching schedule. This year, vote out of self interest.

Your salaries, your working conditions, your classroom supplies all hinge on the decisions the people you vote for make when they're in office. The same goes for non-teaching staff. Some elected officials need to see tens of thousands of educators on the street before they have a "Come to public education" moment and decide, maybe it's time to raise teacher salaries ("But that's it, not a penny more!"). Others want to raise teacher salaries ("But that's only the beginning, we have to do more for our schools and our children!") from day one. Your lives and livelihoods can change for better or for worse based on which candidates win the election.

It may sound like I'm saying you should vote for your limited self interests. I'm not. More support for public education, both financial and philosophical, means our children will have full time, credentialed teachers in more of their classrooms along with more, newer, better educational resources. School staff wins. Students win. Parents win. Arizona wins.

Vote Democratic if you believe our public education should be fully funded, that Arizona should no longer occupy the nation's bottom rung in per-student funding.

Vote Republican if you don't want to "throw money" at failing schools and failing teachers because more money doesn't translate to better schools.

Vote Democratic if you think charter schools need more oversight and regulation to get rid of the bad actors and profiteers.

Vote Republican if you think the current lax charter rules and regulations are just fine, that we should let the "invisible hand of the marketplace" work its magic.

Vote Republican if you like the idea of vouchers for everyone who wants them.

Whatever you decide, teachers, VOTE!