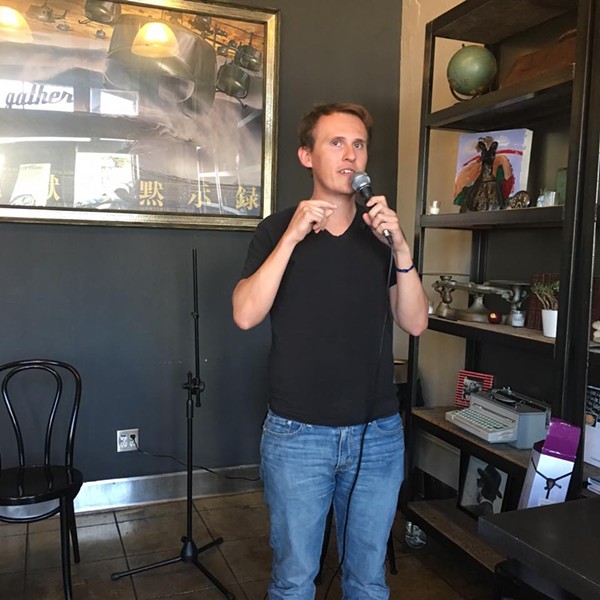 “CANS itself is a super cool bar that I like even when there's not a show there,” says comedian Rory Monserrat, explain ing why he chose CANS as the site for his new comedy show and open mic, Favorite Thing. The show features a series of 6-minute stand-up comedy sets, with a band as a backdrop.

The band, Whoops, is fronted by comedian Cindell Hanson, and serves as something of a Greek chorus, striking up whenever they’re bored, not enjoying the comedy or have a joke themselves.
“They’re like cartoon explosions,” Monserrat says.“It’s a silly fun time with myself co-hosing with the band’s leader, Willie Magoogley, a.k.a. Ringo Boomschicka.”

On Tuesday, Oct. 16, the show starts at 7:30 pm; sign-up is at 7 pm, sharp, for comedians who want to perform. “Usually we end about two hours to accommodate both reasonable set length and overall show length,” Monserrat says. “We always have way too many (comedians) so I made three spots lottery spots. We randomly pick people from the overflow list. People left over on that list automatically get a spot next time.”

So many murders!
Two performances remain in Arizona Rose Theatre’s production of Deathtrap, the popular Broadway comedy thriller. Director Luke Howell amps the fun by stripping out the slapstick. Anne Koepf steals the show as Helga, who has the funniest lines to start with. Newcomer Chris Koval makes Clifford compellingly believable. But the tech crew provides the most dramatic gesture in a spectacular thunderstorm. Tickets are are $8 to $15 at arizonarosetheatre.yapsody.com

Learn Comedy From A Fellow Grayhair

Long-time professional comedian, agent and promoter Ron Reid offers a beginning stand-up comedy class for ages 50 and up starting Thursday, Oct. 25. The class continues four Thursdays from 2:45 to 4:15 p.m. It’s $90 or free to anyone already enrolled for OLLI’s Spring semester. For details, visit Olli.Arizona.Edu and navigate to the Northwest Campus course catalog offering: Stand Up Comedy 101.

A new non-profit providing education and creating opportunities for Tucson comedians debuts Saturday, October 13, at the grand opening of Hotel McCoy, 720 W. Silverlake Road. The modern vintage motel opens with art, music a charity raffle and dancers as well as comedians representing CAT. The event is free and open to the public.