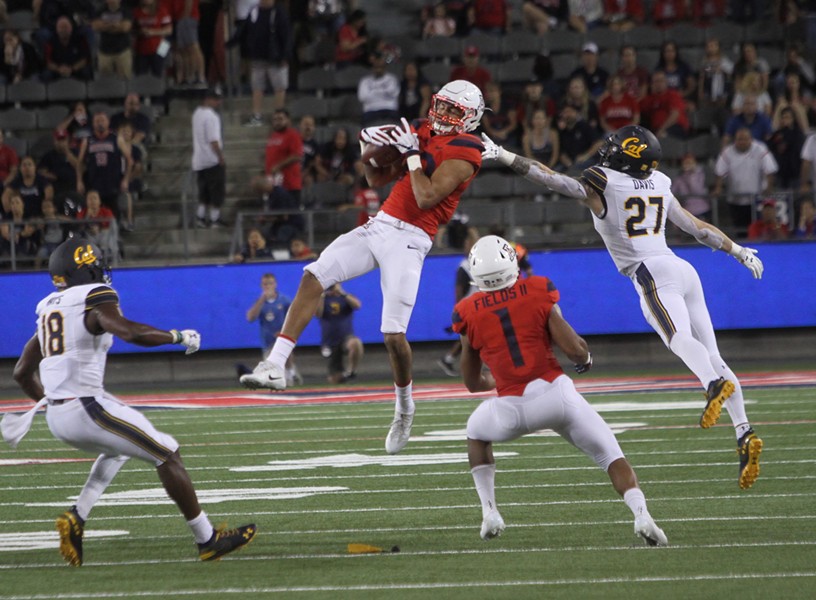 The tide of Arizona's contest with the Cal Bears turned on a wayward pass, an interception and a dash of luck that broke the Wildcats way.

The turning point came with 3:19 remaining in the game's third quarter, with Cal leading, 14-10. Redshirt sophomore quarterback Brandon McIlwain, who scored each of the Bears' two touchdowns, dropped back in the pocket on a seemingly routine pass play.

The Bears were deep in Arizona territory, with the ball at the Arizona 36, facing a 2nd and 12, when McIlwain's pass over the middle careened off the hands of his intended receiver and into the arms of sophomore linebacker Colin Schooler.

Schooler was off to the races, carrying the ball out to the midfield stripe—when it was batted out of his hands by a Cal player, flying through the air toward the Cal end zone.

That's where Arizona got its second break of the night, as redshirt freshman cornerback Azizi Hearn was able to scoop up the fumble, racing into the end zone for the go-ahead score after shaking free of a Bears player that latched himself to Hearn's midsection.

The improbable defensive score gave the Wildcats a 17-14 lead, sending the announced crowd of 44,253 at Arizona Stadium into a state of delirium.

Schooler (and Hearn's) defensive mettle was matched a quarter later, when sophomore safety Scottie Young Jr. jumped in the way of a McIlwain pass.

The sophomore had a full head of steam and no one in sight after securing the interception, racing 24 yards for a 'pick six,' ensuring the Wildcats' third win of the season.

The Bears (3-2, 0-2) hit a 35-yard field goal in the game's waning seconds to get within seven, but failed on the ensuing onside kick attempt.

The net result of the night's frenetic contest was a 24-17 victory for the Wildcats, giving them five-straight wins over the Bears, dating back to 2010.

First-year Arizona Coach Kevin Sumlin was just as dumbfounded by the interception/fumble return touchdown as those in the stands, expressing how helpless he felt watching the play unfold.

"I don’t know, right now, it’s all going fast. So, I’m just like you guys," Sumlin said. "It’s like a sack of a quarterback—where the quarterback doesn’t see the sack coming and the whole stadium sees it and you can anticipate the sack; the strip, and the fumble."

Sumlin said the moral of the long defensive touchdown was to never give up on a play, and to keep your head in the game at all times if you're on the field.

"You always talk about, ‘A guy who has a nose for the ball,’ and that’s not what it is, he’s just playing hard," Sumlin said. "And a lot of times, when you play with that effort, the ball’s going to bounce your way more often than not, if you’re playing with effort. And that’s really the moral of that story, because there’s a lot of guys that were running the ball with Colin. And sometimes the ball bounces your way with effort, and that can be the result."

Schooler, who finished the night tied for the team lead in tackles (9), joked that the interception-turned-fumble return touchdown was all planned.

The sophomore thanked Hearn for bailing him out, and said that the defense's nightlong effort in containing the Bears offense was a dream come true for all involved.

“That went from good play to bad play to great play," Schooler said. "That was a huge momentum swing and I gotta trust my teammates to pick up the slack sometimes for me.”

Hearn touched on a similar narrative postgame, describing how hard the secondary has worked in practice to prepare themselves for any loose ball situations, and how rewarding it was to score the go-ahead touchdown for his team.

“My coach always tells me to get the ball because being around the ball can only bring good things," Hearn said. "I was just doing my job and got rewarded for it.”

The Wildcats, who started the Pac-12 conference season with a 35-14 road win against Oregon State, were looking to bounce back from a heartbreaking 24-20 loss at home to Southern California last Saturday.

They did so against Cal, thanks to a defense that's held each of its first three conference foes to 24 or points or less since the 2010 season.

It was also the first Arizona game with multiple defensive touchdowns since the team's 42-32 win over The University of Texas-San Antonio in 2015, when the Wildcats scored on an interception and a fumble return.

Sumlin had nothing but respect for his defensive unit and Defensive Coordinator Marcel Yates, for their ability to shut down opponents this season.

"I thought that was a gutty performance," he said. "It’s two weeks in a row in the second half where the guys have really played very, very well."

The latest chapter of the Arizona-Utah series, which will kick off on Friday at 7 p.m. Arizona time on ESPN, comes on the heels of back-to-back Utes' victories over the Wildcats, with Utah winning last year's game on a Friday night in Tucson, 30-24.

Sumlin knows the short week will present a challenge for his players and coaches alike, but believes the team will be prepared come Friday night.

"The guys are excited downstairs, but we’ve got a short week this week too," he said. "I think we’re reasonably healthy with guys coming out of this game, and guys that missed this game with injuries. But all in all, I think there are a lot of lessons to be learned, as there are every week."