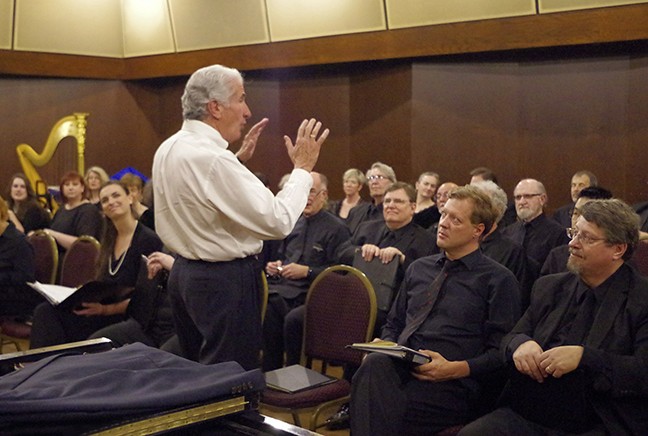 The Tucson Symphony Orchestra Chorus, directed by Bruce Chamberlain, will hold auditions for new chorus members Monday, Oct. 1 at 7 p.m. at the Tucson Symphony Center, 2175 N. Sixth Ave. All performances are with the TSO.

In a recent season, the Green Valley News and Sun called their performance of Poulenc’s Gloria, “the epitome of phrasing, intonation and balance,” and added, “The four months Professor Chamberlain spent preparing the chorus rewarded the audience in many ways.”

Singers should have basic musicianship and be able to adapt to various repertoire. They should prepare two choral excerpts downloaded from the website and a solo piece from the art song or oratorio repertoire. The two choral excerpts, which are to be prepared before coming to the audition, can be downloaded at tucsonsymphony.org/about-tso/orchestra/tso-chorus. An accompanist will be provided. Rehearsals are scheduled for the Symphony Center on Monday evenings throughout the season, beginning Oct. 8.

In addition to the opportunity to make high-level music with Tucson’s best choral and orchestral musicians, benefits of singing in the TSO Chorus include complimentary tickets to select Classics and TSO SuperPops! concerts. Chorus members also receive free parking when they are performing.

For more information and to schedule an audition email auditions@tucsonsymphony.org.