Three Great Things to Do in Tucson Today: Tuesday, August 7 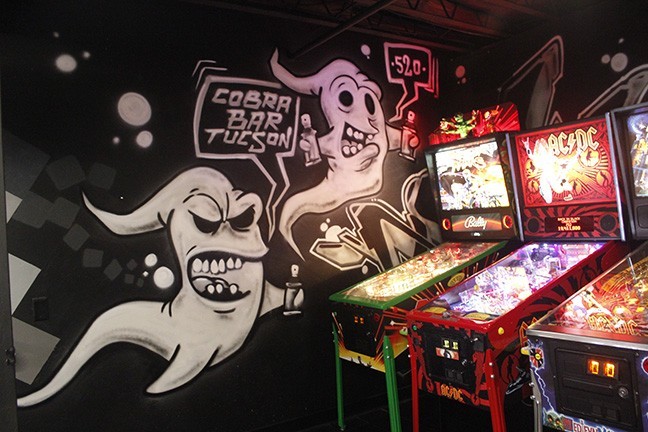 Token Tuesdays at Cobra Arcade. If you haven't checked out the new arcade bar downtown, then you'd better hustle on over, so that you can play Streetfighter II while drinking a fancy, Donkey Kong-themed cocktail. And you might as well do it on a Tuesday, when they give out free tokens with every drink purchase. Happy hour is 4 to 7 p.m., and they promise there'll never be a cover. So stop in this Tuesday! Stop in every Tuesday! And kill some aliens/beat up some bad guys/stack some blocks/do whatever you gotta do. 4 p.m. to 2 a.m. Tuesday, Aug. 7. Cobra Arcade Bar, 63 E. Congress. Free entry.

Sad Baxter. Deezy and Alex are a pair of lifelong friends who dated and broke up and still play in a heavy sludge-pop band together. With phrasing lifted right off an early Hole or Veruca Salt (or Runaways) record, and guitar spliffs that get bigger and more vacuous with each passing reverberation, Sad Baxter is an angst-stunned band seeking catharsis through noise. They're trying to love the world even and especially when it blows. "I love you," spits from Deezy's mouth like, "You piss me off," would for most of us. Yet she continues to plead. Dig "Believe me," "Love Yew," and "Big One." From Nashville via Jersey, Sad Baxter mix the trash with the cosmopolitan, and would be at home supporting, say, Dandy Warhols. There's a deeply wound tightness that happens between the melody and rhythm, endless guitar loops and restrained drums that could only result from bffs. All the togetherness with none of the fucking. Therefore, angst. With Whispering Wires, Tuesday, Aug. 7. Café Passe, 415 N. Fourth Ave. 9 p.m., Free. All ages with parent or guardian. —B.S. Eliot

Geeks Who Drink. It's Tuesday in the Old Pueblo and that means it's time to put on your thinking cap and head over to Hotel Congress for a night of trivia and tasty beer. Plus, you might still stand a chance before all those smart university students are back for the semester. Trivia is free and beers are for sale as you enjoy the cooler evening temperatures on the patio at Hotel Congress. Trivia starts at 8 p.m. and the game will roll through eight rounds as you sip and think. Details here.

Do This! Fun in General things to do Tucson events Tuesday shows events concerts fun
Prev
Next