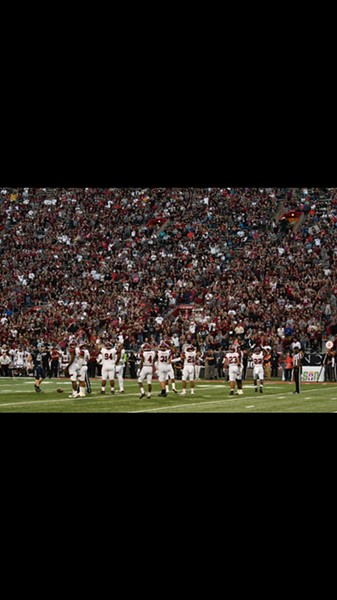 Addressing a crowd of Tucson locals (and a few journalists) Wednesday afternoon, Ali Farhang had plenty of news to share about the NOVA Home Loans Arizona Bowl. The event’s founder and former chair, Farhang spoke to more than two dozen men and women at the AC Marriott downtown.

Last December’s matchup between New Mexico State and Utah State brought in just over 39,000 attendees to Arizona Stadium. NMSU, which played in its first bowl game since 1960, took home a 26-20 overtime victory.

It’ll be tough to one-up such a contest this December, with the game scheduled for 11:15 a.m. Arizona time on Saturday, Dec. 29, but Farhang said he believes that the community has the willpower to do just that.

“We’re going to pack Arizona Stadium,” he said. “This is Tucson’s game. It’s for us, by us, with all net proceeds going to charity and all the good work that we do. There is no reason why Arizona Stadium can’t have over 50,000 in the stands this year.”

Farhang said last year’s game raised $200,000 for local charities, and $2.8 million in the event’s first three games, thanks to 100 percent of the gate receipts going to local nonprofits.

That generosity, in combination with the 13,000 tickets that Tucsonans donated to first responders, military members, underprivileged kids and teachers, shows the heart that the community has.

“That says a lot about us. That’s a testament about the kind of people that we are in Tucson and Southern Arizona,” Farhang said. “And as happy as we are about the giving, we are also gratified about the economic impact we had.”

Farhang also introduced his successor, Kym Adair, who touched on the game’s unique crowd-centric nature. The Arizona Bowl comes with a downtown block party, which Adair said will take place Friday, Dec. 28, and called it a key to the game’s unique nature.

“We have surpassed all expectations of a bowl our size and we’ve done it in three years and we’re proud of that,” Adair said. “But it’s not enough and this is why 100 percent of our net proceeds go to charity.”

Adair implored the community to buy seats to this year’s game, even if they can’t make the game, so that they can give as much money to charity as possible. Every empty seat in Arizona Stadium symbolizes dollars that could have gone directly back to support needy children, homeless veterans and teachers in the community, Adair said.

“We’ve got to get more dollars back into our community,” she said. “This game has tangible results for Southern Arizona. So, Tucson, it’s time to recognize that this is our game.”

On the road to selling more tickets this year, Farhang believes the bowl’s city-centric advertising approach will help out, even if a bowl-starved program like NMSU is not invited.

“The energy’s got to resonate from our community,” he said. “And as difficult as it is for me as a high school football coach to admit this, it’s about more than just football. So, if we build a tradition of weeklong events that shows the best of our community, then it really shouldn’t matter what teams are playing.”

One thing that Adair and Farhang hope will boost attendance is an agreement they’ve struck with New Mexico State—who departed the Sun Belt Conference to play football as an independent this fall. The agreement, announced on Aug. 1, allows the Aggies to play in Tucson, should the Mountain West and Sun Belt (the bowl’s two contracted conferences) not have enough teams to send a representative to the Old Pueblo.

Adair is thrilled about the possibility of having NMSU back in future games, given the energy that their fans brought last December.

“This is a terrific opportunity for us to bring back New Mexico State University should one of our conference not be able to give us a team this year,” she said. “The enthusiastic fans that came to Tucson last year from Las Cruces created remarkable energy in Arizona Stadium. We would enthusiastically welcome them back if one of our bowl conferences can’t produce that team.”