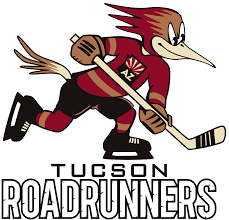 There will be a new face manning the bench area at Tucson Arena this fall when the Tucson Roadrunners kick off their third season of regular season play.

Jay Varady, who spent four years in the United States Hockey League and one in the Ontario Hockey League, was tabbed as the team’s third coach in as many years on Monday.

The Cahokia, Illinois native is tasked with picking up where the team left off this season, posting the best winning percentage in the American Hockey League’s Western Conference (.662), making the postseason for the first time in franchise history.

Varady is ready for the challenge ahead in his first professional coaching stop in America (he began his career spending two seasons as the coach of a pro team in Angers, France).

“It’s been a long-term career goal of mine, to coach in the American Hockey League,” Varady said in a teleconference Monday. “If you look at my résumé of where I’ve been, my career goal has always been to be a professional hockey coach … I think over the last few years, with my head coaching experience, I was able to get the opportunity to be a part of pro hockey at the American League level.”


Varady’s time as a head coach with the Sioux City Musketeers of the USHL and Kingston Frontenacs of the OHL honed his ability to develop young talent, a key tenant of the job description in the minors.

Varady believes his time at the junior hockey level will come in handy this season, serving as a natural progression in his coaching career.

“After an extensive search, we are very pleased to select Jay as our new head coach of the Roadrunners,” said Sullivan. “Jay is an excellent coach, teacher and a proven winner. We are confident that he is the right coach to continue forming the culture that we are creating with the team. He will be a great leader and will continue to develop our prospects in Tucson.”

Varady is confident that he can continue his winning ways with the Roadrunners, picking up where Van Ryn, who left to become the assistant coach of the St. Louis Blues, left off.

“I think Mike did a fantastic job last year with the team. And obviously, he got an opportunity to be an NHL assistant because of his work with that group,” Varady said. “And I think from my standpoint, we have to go in there and we have to build on that foundation.”

“I think we have to continue the continuity that was really built last year, with the development of the young players and the culture of trying to win hockey games night in and night out,” Varady said.

Varady’s experiences inside the Old Pueblo are minimal, passing through on the way to his parent’s house in Las Cruces, New Mexico.

He’s excited to get acquainted with the region, living and coaching within hours of his parents for the first time since his whirlwind hockey career began more than a decade ago.

“I don’t know if you get an opportunity in hockey to ever really let personal stuff get involved too much,” Varady said. “But I would say that it’s the first time since I was 15 years old that I’ve been in a ZIP code a few hours from my parents, so it’s a little different for me.”