Slaughter at the Annapolis Capital: A Tragedy Hits Close to Home 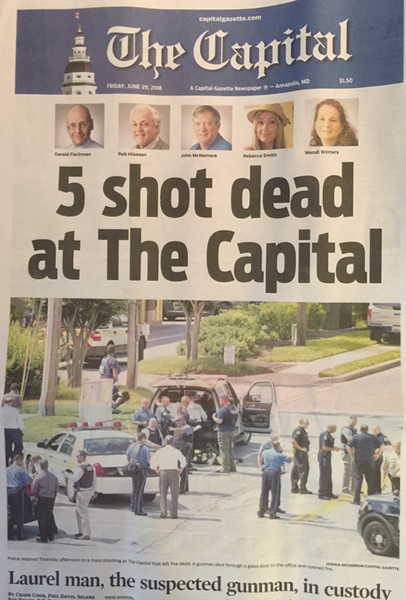 A man with an apparent grievance and loads of ammunition ambushed my former newsroom on Thursday, June 28.

The 38-year-old gunman shot through, then entered the glass-encased front door of the newsroom I once called home, gunning down anyone daring to escape out the back.

The gunman was a well-known figure in the Annapolis Capital newsroom, airing incomprehensible grievances against the paper’s staff, dating back to when I interned there in the summer of 2013.
His murderous intentions became crystalized on a muggy Maryland afternoon, when he indiscriminately slaughtered five of the men and women I once called colleagues.

The assassination was more than an egregious attempt to silence a deranged man’s perceived enemies. It was an attack on the very principles that my industry is founded upon.

It was an attack on the airing of truths, like the 2011 column the Capital wrote about the gunman after he allegedly stalked and threatened a woman online.

It was an attack on a brotherhood of underpaid, overworked servants of truth—who still managed to turn out a damn fine paper after a fourth of its staff were slain.

Five years ago, I sat down with longtime reporter and editor John McNamara in the paper’s dingy old newsroom. McNamara, who was my go-to source for contact info and bits of color for the sports stories I filed that summer, was slain alongside colleagues Robert Hiaasen, Gerald Fischman, Rebecca Smith and Wendi Winters.

This quintet of talented people did nothing wrong. That day they gathered their materials, got in their cars and drove to their nondescript multistory office complex across the street from the Annapolis Mall.

They were fathers, sons, daughters, brothers and sisters to many, and are the latest in an all-too-long list of Americans that found themselves on the wrong end of a loaded barrel.


I did not have the fortune of knowing the other four victims but know many who do. I know how much each of these victims meant to their loved ones.

I know how hard John McNamara worked every day to pump out quality sports and news content—how ravenous he was about University of Maryland athletics, and how passionate he was about journalism.

I know how hard the 20-man staff of The Capital works every day to provide the in-depth coverage of Anne Arundel County that no other outlet can.

I know the loss; the sorrow; the unrelenting pain that is shared by so many back home and in newsrooms across America.

I know how much each victim meant, both to their colleagues and the community as a whole.

My former sports editor during my three-month internship, Gerry Jackson, summed it up beautifully.

I reached out to Gerry via email on my drive home from covering a Little League game on Thursday night—wiping away a day’s worth of unrelenting sorrow.

He responded quickly, to my surprise, thanking me for my message, while eloquently summing up what each victim meant to a man who spent more than a quarter-century with the paper.

In his email, Jackson briefly described the immense sensation of loss that he and his longtime colleagues shared, saying, “[I] lost great friends, including John McNamara, who worked with you.”

It was a simple, 29-word email from a former mentor I’d long since lost contact with, but it expressed the bond shared inside a community paper’s newsroom.

Community journalists—and journalists in general—are not power-hungry enemies of the state. We’re your family, friends and neighbors—the ones who spend long hours covering the mundanity of town council meetings, high school sporting events and everything in-between.

We’re not your enemy, or purveyors of what some call “fake news.” Far from it. We agonize over trivial errors, we pore over budgets, factsheets and interview notes to ensure 100 percent accuracy.

We will, as my grieving brethren declared in Friday’s mostly blank opinion page of the Capital, “Return to its steady purpose of offering our readers informed opinions about the world around them, that they might be better citizens.”

We will continue our work, providing the can’t-miss coverage of Southern Arizona communities that no one else will touch.

Longtime Capital reporter Chase Cook summed it up in a tweet on Thursday afternoon, when he reaffirmed the steely resolve of stalwarts in this industry.

“I can tell you this: We are putting out a damn paper,” Cook tweeted.

They stare down the obstacles in their midst, from callous public officials to cumbersome subjects, all to provide the best product possible.

They serve as an ongoing record of a community’s heartbeat, providing the in-depth coverage the public relies upon.

They, as Capital photographer Joshua McKerrow told the Times, survive the test of time, providing generations of residents with timely, quintessential information.

“It’s a real newspaper and like every newspaper, it is a family,” McKerrow told the Times as he began to cry. “We will be here tomorrow. We are not going anywhere.”