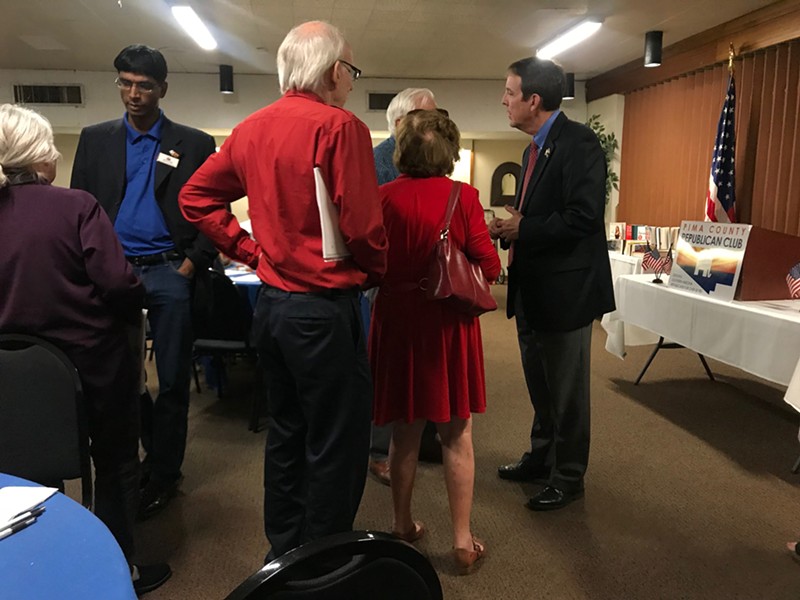 At yesterday’s Pima County Republican Club gathering, Ken Bennett told the crowd that when he saw Gov. Doug Ducey “cave” to the mounting pressure from K-12 educators and announce the “20x2020” plan, he knew he had to run for governor.


That was on April 12, so his team collected the 6,223 signatures required plus almost another 2,000 in a little over five weeks to qualify him for the Aug. 28 Republican primary.


Bennett, a fifth generation Arizonan from Prescott, served as Arizona’s Secretary of State from 2009 to 2015. Before that, he was a state senator from 1999 to 2007, including a four-year stint as Senate president. In 2014, he got 12 percent of the vote in the crowded GOP primary for governor that Ducey won.

Bennett claims the #RedforEd movement is a politically oriented undertaking aimed at turning Arizona into a blue state. He is skeptical that educators will be satisfied with the raises Ducey has promised.

“Every time you give a mouse a cookie, they’ll ask for a glass of milk,” Bennett said.


Bennett spent the first third of his speech doing what he does best: talking about the Arizona state budget. Referencing his famous Kleenex box demonstration, Bennett criticized the state legislature for falling into debt in the years since he left the Senate and the economic recession took its toll.


He said when he was President of the Senate, the state budget was balanced, with $9.5 billion coming in and $9.5 billion going out along with a $1.1 billion reserve fund that he helped establish. Comparing this previous success to the current budget, Bennett said there has been a lot of “accounting tricks and gimmicks” to make up for lost funds, which have ultimately held Arizona back.


“I decided to run for governor because I want to balance the budget,” he said. “I proved that I can do it with a Democratic governor, and I know that we can do it again.”


To do that, Bennett vows that a top priority of his campaign is make sure the Affordable Care Act gets repealed completely, and as soon as possible.


“Obamacare is going to bankrupt our country,” he said. “It’s hurting small businesses, it’s killing jobs, so I believe very strongly that we need to get rid of it.”


When Bennett mentioned the impending appointment of Cindy McCain to her ailing husband John’s Senate seat, a deep groan erupted from the audience. Bennett said if elected, he would not appoint Cindy to the position, because “U.S. Senate seats are not family heirlooms.”


After expressing this view on Twitter, Bennett was met with harsh criticism by members of his own party. At the club’s meeting, he said he doesn’t mean any disrespect to Cindy, but he would never appoint someone who will vote against repealing Obamacare, referencing Sen. McCain’s famous “thumbs-down” gesture in July of last year.


Bennett used this topic to take another jab at his opponent, claiming that Sen. McCain voted against the repeal because he was upholding the wishes of the governor. 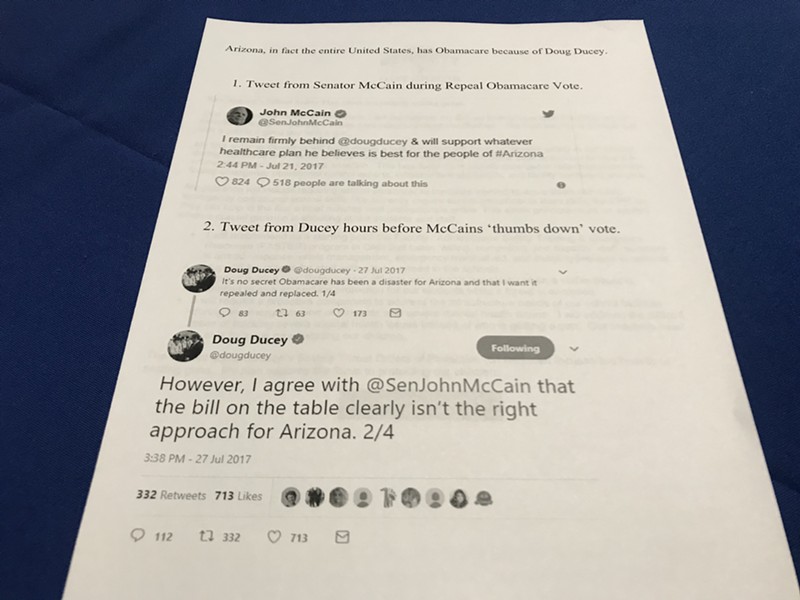 Bennett has clearly positioned himself to the right of Gov. Ducey, claiming that he isn’t doing enough for conservative interests in the state. Bennett criticized Ducey's school safety proposal, which didn't advance far at the Legislature this year, as a prime example.


“My school safety operation plan does not involve taking guns away from Arizonans,” he said, drawing loud cheers from every corner of the room. “The best way to stop a bad guy with a gun is to have a good guy with a gun at the same place at the same time.”


His proposal is modeled after Ohio’s existing FASTER program, which calls for firearms and emergency response training for school staff, the use of infrastructure specialists who will make updates to secure school campuses and increased efforts to identify and assist students who show signs of mental illness.


While the training programs can be provided free of cost, it is unclear how Bennett plans to fund the infrastructure projects or increased mental health support.


He asked the audience, “Why are our schools not as secure as airports or concerts or government buildings?”


According to Bennett’s handout, the firearm training would not be mandatory but offered only to “willing, competent and capable staff members.”

Although he previously said that the #RedforEd movement was a liberal political stunt, Bennett’s plan would distribute tax credits to teachers who take the firearm training. The credits are intended to help pay for a firearm and other related equipment.

An audience member mentioned a big concern with Bennett’s plan: What if a trained teacher accidentally shoots an innocent student while trying to take down an active threat?


Bennett replied, “Can somebody hit somebody they weren’t intending to while trying to stop a shooter? Of course. And all of those things will get worked out. I’d rather have [a trained individual] stop a shooter and maybe get somebody else nicked in the process than have bodies dropping every eight seconds.”


After the event, Bennett said in an interview that the FASTER program is adaptable to each school’s situation, and teachers would only be expected to do what they are comfortable with. He said if they want to keep their weapon in a holster with a lock, they can do that. If they prefer to keep it locked in a safe, they can do that too. He added that the program will not advertise to students and faculty which teachers are carrying a gun or where the guns are located.


Ducey’s gun control plan included tightening background checks and implemented the use of a Severe Threat Order of Protection, which allows law enforcement, school faculty, mental health professionals, family members or other relevant parties to petition in court and prevent a high-risk individual from obtaining a firearm. In comparison of the two, Bennett’s plan is expected to receive more support from Second Amendment activists and voters.

Bennett is running as a Clean Elections candidate, meaning he would receive $839,704 in public funds for his primary run if he can get 4,000 registered voters to each give him a $5 contribution. In return, Bennett has agreed to not accept traditional campaign funding from individuals and political action committees.

Kevin McCormick, a Libertarian, is the only other Arizona gubernatorial candidate running a Clean Elections campaign. Clean Elections funding is generated from a 10 percent surcharge on all civil penalties and criminal fines in the state.